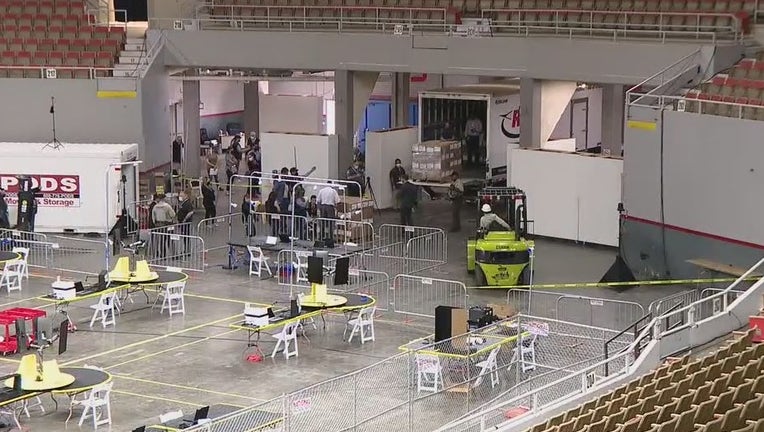 PHOENIX (AP) - The Republican president of the Arizona Senate said in a letter Friday to the U.S. Justice Department that ballots being recounted from November’s presidential election are secure and the department’s worries about voter intimidation are unfounded.

The letter from Senate President Karen Fann came two days after the head of the department’s Civil Rights Division sought assurances from the Senate that 2.1 million ballots from the state’s most populous county are being secured as federal law requires.

Fann said in her response that the Senate had determined several weeks ago that plans to directly contact voters to see if they actually cast a ballot were being indefinitely deferred. And Fann said that if the Senate ultimately decides to contact voters, the vendor will implement detailed rules ensuring the contacts comply with federal and state civil rights law.

The Justice Department letter said federal law requires ballots from federal elections to remain in the control of election officials for 22 months, and that Fann’s decision to hand them over to a contractor may violate that law.

Fann, a Republican, said in her response that security is tight at the state fairgrounds venue where teams of contractors are recounting votes in the race won by President Joe Biden, and that former Arizona Secretary of State Ken Bennett is at the site daily to ensure that remains true.

She vowed that "not a single ballot has been destroyed, defaced, lost or adulterated" and said she was confident none would be.

A Justice Department spokesperson didn’t immediately respond to a request for comment on Fann’s letter.

"We are very concerned that the auditors are engaged in ongoing and imminent violations of federal voting and election laws," said the letter sent by the Brennan Center for Justice, the Leadership Conference and Protect Democracy.

Secretary of State Katie Hobbs wrote a letter earlier this week to Bennett, laying out a series of concerns she had with the policies the contractor was using in the recount. Hobbs said the policies were "vague and insufficient to ensure accuracy and consistency."

Bennett responded Friday, saying Hobbs had signed a court stipulation Wednesday releasing any claims that the recount policies were "legally inadequate or not ‘consistent with state and federal statutory and constitutional law and the EPM, including with respect to the security and integrity of ballots and election equipment.’ "

"With all due respect, it reads like a political press release calculated to undermine a process that you have opposed since its inception," Bennett of Hobbs’ letter.

The recount that began on April 23 is moving extremely slowly, with only about 10% of the ballots counted so far and only a week left on the Senate’s lease on the Coliseum.

Bennett said earlier this week that he hopes they can pause the recount while a series of high school graduations are held and then restart it at the same site. The fair board’s spokeswoman, however, said an extension is not possible.

The recount is being done, Fann said, to put to rest concerns by former President Donald Trump and his backers that he lost Arizona and other battleground states bets because of fraud.

Multiple audits, a hand recount of a sample of Maricopa County ballots, and numerous lawsuits found no evidence of any problems with the election.

Secretary of State Katie Hobbs says she had received several death threats because she is an outspoken critic of the Arizona State Senate’s ongoing and controversial efforts to audit the 2020 election.

Hobbs has asked GOP Gov. Doug Ducey to provide her security. The request was granted.

The Democratic Secretary of State tweeted late Thursday that she had received several death threats because she is an outspoken critic of the Senate’s effort to audit the 2020 election, which she and Ducey both certified last year and declared as free and fair. She also complained that she was chased by a reporter for a rightwing website. Hobbs is the state’s top elections official.

"The @ArizonaAudit and its far-right allies know their rhetoric will lead to this," she tweeted. "They are complicit."

"Threats of violence are completely unacceptable, we take them very seriously," Karamargin said.

Hobbs says 24/7 security for an elected official such as herself is not normal, but at this point, it seems to be necessary.

"These are a result of everything going on with the audit, and you’ve got folks like Kelli Ward, everyday, on Twitter telling followers to go after me, and clearly some people are taking it literally," said Hobbs.

This is not the first time Hobbs has been on the receiving end of death threats. In late 2020, Hobbs said she received threats against her, and her whole family.

"Now, these folks have started to attack my husband at his place of employment. He works at Phoenix Children’s Hospital. There was management reported nearly 200 threatening phone calls," said Hobbs, in 2020.