Arizonans land in Louisiana to help victims of Hurricane Ida

PHOENIX - Hurricane Ida hit Louisiana with 150 mph winds on Sunday and a handful of Arizonans are in the thick of it all helping southerners seek shelter.

The Red Cross has a team of people from Arizona already in Louisiana who are hunkered down until the storm passes.

Jim Harms, American Red Cross shelter manager, says, "This is a different animal … but the intensity, speed and how close you are to the impact area really makes a difference."

"We're at a disaster," he said as the hurricane struck New Orleans. Officials are calling this the strongest hurricane to hit the state since Hurricane Katrina exactly 16 years ago.

Strong winds, debris, trees uprooted, flooded streets and the city is completely dark after thousands had their power knocked out.

Currently, there are 11 shelters set up to help those directly affected. The team from Arizona is deployed for two weeks, wearing different hats including logistics, sheltering, medical and counseling services.

The shelter was up and running before the storm hit.

Mary Reagan with Red Cross, says, "It's a real mess after the storm hits, so you just need to get in, get your feet on the ground. If we didn't set up shelters until after the storm, think of all the people that would try to ride out the storm in their bathrooms and tubs, in their basements. The shelters give people a safe place to be with other people to ride the storm out."

Volunteers didn't head out until after the storm. 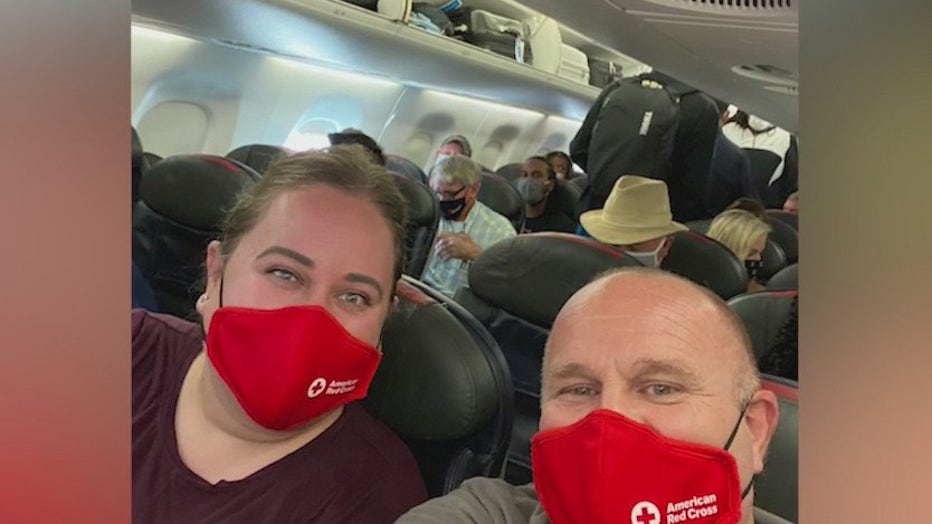 "All my guys out in the field and in the shelters, they’re hunkered down and in some areas are away from the main sleeping quarters because it’s not the ideal space to be in when the storm comes in," Harms said.

Elizabeth Alvarez also headed to the storm for the Red Cross, working to set up shelters.

"You have a moment and someone like you asks about it, and that’s when and that’s when the emotion comes because you’ve seen people who are in need and it’s wonderful to be able to help but you always wish you could do more," she said.

Officials said Ida’s swift intensification from a few thunderstorms to a massive hurricane in just three days left no time to organize a mandatory evacuation of New Orleans’ 390,000 residents. Mayor LaToya Cantrell urged residents remaining in the city on Sunday to "hunker down."

New Orleans native in Arizona can't get ahold of his father

New Orleans native in Arizona can't get ahold of his father

New Orleans native and small business owner Ontario Kador moved to Phoenix in 2020 and of course, his thoughts are with loved ones in Louisiana, including his father who he says he can't get ahold of as of Monday.

Kador keeps trying to call him, but it "goes straight to voicemail," he said.

His market, Southern Belle Cajun Foods, screams Louisiana all the way from the Valley of the Sun. Hurricane Ida is the first to hit New Orleans since he moved away to open his business in the desert.

"This feels different because I wasn’t there but I talked with my people and they were just going through the motions the same way they always do," Kador said.

Adding, "The whole power knocked off to the city, it’s hard to talk to anybody. That’s just how it is."

He believes his father is hunkered down somewhere as the storm passes.

Those in Hurricane Ida's path being helped by several Arizona volunteers