Astronauts aboard the International Space Station revealed how they would be spending their Thanksgiving while orbiting 250 miles above Earth.

Members of NASA’s Expedition 66 released a video on Nov. 24 sharing what their traditional Thanksgiving holiday looked like on Earth and how they would be spending the holiday this year while aboard the ISS.

Kayla Barron, an Expedition 66 flight engineer, said the Thanksgiving holiday has always been about spending time with the people she loves the most and "focusing on family and friends and being together and what we’re grateful for."

Mark Vande Hei, also a flight engineer, said, "For my family, it was really all about getting people to come from wherever we’re living, different places, and coming together."

Vande Hei also mentioned his family, who reside in Houston, would spend the holiday eating outdoors because the climate was "so warm." 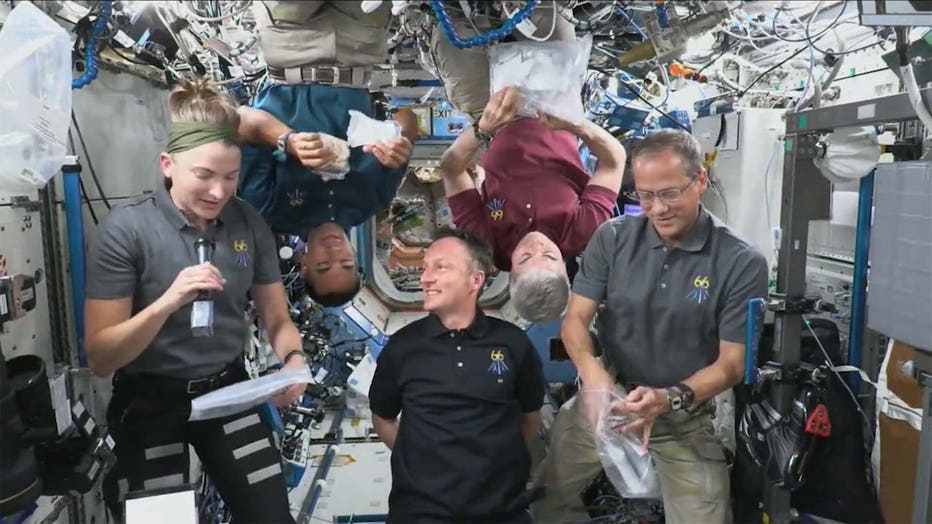 Still image of NASA’s Expedition 66 crew sharing what is inside bags of food that contain Thanksgiving feast.

RELATED: NASA launches spacecraft to crash into asteroid next September

"Every Thanksgiving in Houston, we’d take our dining room table and we move it out to the driveway and we eat outside," Vande Hei said.

Astronaut Mark Marshburn said while coming together and spending time with friends and family is an ongoing theme amid the Thanksgiving holiday, the food is the most important tradition in his family.

"The food is a big part of it because being thankful for the fact that we have it and we can enjoy it," Marshburn said.

"Typically at our family Thanksgiving, we’ll do a thing where we go around the table and say what we’re thankful or grateful for," astronaut Raja Chari added.

This year, the astronauts will be hard at work for Thanksgiving, but will still get to enjoy a feast together, Barron said. The Expedition 66 team plans to invite their cosmonaut friends to join them for their Thanksgiving meal, Barron continued.

"Luckily, it doesn’t take us long to cook food in space because most of it is just being reheated," Barron said with a chuckle.

"My family would be very happy that I’m not preparing a Thanksgiving meal for the crew," Marshburn joked. "The food is actually fantastic," Marshburn added.

In the video shared by the ISS, crew members took out bags of food that contained a veritable feast that would be served for Thanksgiving dinner.

One bag contained crab bisque, another contained roasted turkey and another bag had potatoes au gratin. There was even a bag of candied yams — and most importantly, the dessert bag had cherry and blueberry cobbler inside.

Vande Hei said that while the team has not been together for that long aboard the ISS, he is thankful for his teammates and the time they have spent in space has been "wonderful."

The Expedition 66 crew has been aboard the ISS since October and their mission will end in March 2022, according to NASA.

"Thank you for being part of Expedition 66 and join us again," flight engineer Matthew Maurer said.