Video, taken by hikers near Moab, Utah, shows the jumper’s parachute catching a gust of wind, before slamming into a 400-foot cliff. (Credit: Baron Edwards)

MOAB, Utah - A BASE jumper is lucky to be alive, after an accident that required a daring rescue Saturday.

Exclusive video, taken by hikers near Moab, Utah on Nov. 26, shows the jumper’s parachute catching a gust of wind, before slamming into a 400-foot cliff called Tombstone in Kane Cree Canyon.

After the crash, the footage then shows the jumper’s parachute narrowly catching a ledge, breaking his freefall and suspending him more than 100 feet in the air.

According to Grand County Search and Rescue, the jumper dangled for more than one hour while teams worked to rescue him. 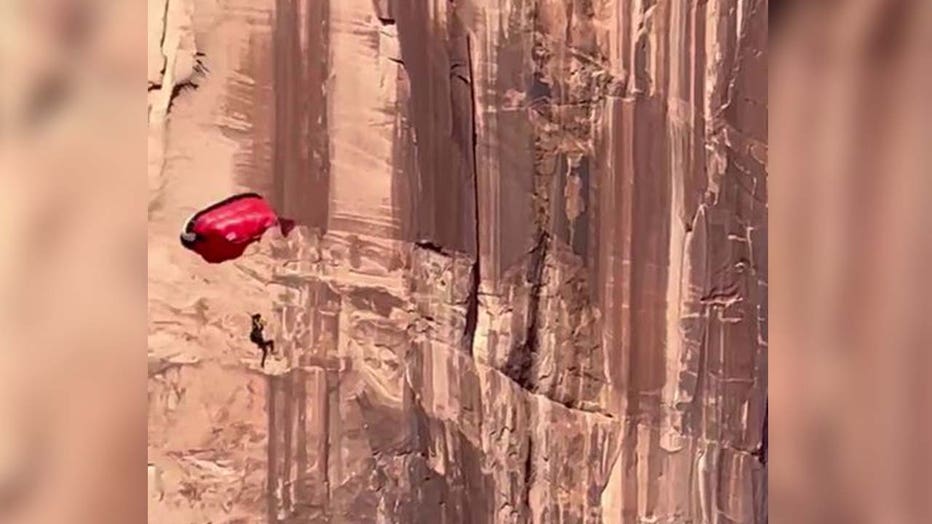 An official with GCSR confirmed to FOX 11 Los Angeles that the jumper was alive when he was eventually airlifted out of the canyon.

RELATED: Cleveland BASE jumper slams into building on his way down, video shows

Officials say this was one of three BASE jumping incidents in Moab over the weekend, where an annual BASE jumping event called the Turkey Boogie was being held to raise money for the GCSR. According to the fundraiser’s Facebook page, Moab is an area that has long supported the sport.

It’s not clear if the jumper in the video was affiliated with the event, but FOX 11 reached out to organizers for more information. There is currently no word on his identity or condition.

BASE jumping is an extreme sport typically done off of bridges or cliffs that involves pulling a parachute on the way down. More recently, BASE jumpers have also parachuted off of buildings.