Carl and Stefanie Sanders were overjoyed to be reunited with their poodle, Monkey, after a car thief stole their truck with Monkey inside.

BLACK DIAMOND, Wash. - A Washington couple was reunited with their poodle, Monkey, three days after watching a thief drive off in their truck with the beloved four-legged family member in the back.

The truck was stolen Friday from a gas station in Black Diamond, Wash., KIRO-TV reports, and Monkey was reunited with his family on Monday.

Chopper footage at the scene of the incident shows Monkey being held tightly by his owner, Carl Sanders.

In surveillance footage from the gas station, the suspect can be seen getting into the truck while a pump is still attached. Monkey is clearly visible in the vehicle as the suspect drives away, ripping the gas nozzle off of the pump.

“I ran outside and there was my truck taking off with my dog looking straight at me,” Sanders told KIRO-TV. “Gas going all over -- and he almost ran over a couple of people and flew out onto the highway." 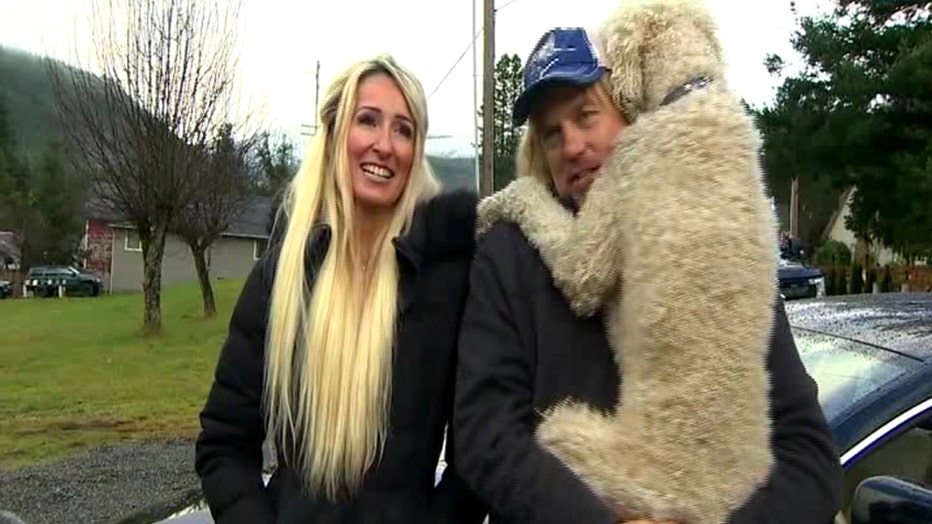 Stefanie and Carl Sanders are reunited with their poodle, Monkey, after he was taken by a car thief.

According to deputies, the suspect was also inside the truck and attempted to ram the detectives’ vehicle with the stolen truck. Deputies said they then fired shots into the vehicle, which resulted in the suspect being killed at the scene.

Deputies did not release the identity of the man who was fatally shot, but announced over the weekend that they believed the suspect to be a man who had been released from the King County jail just 10 days prior to the Sanders’ truck being stolen.

"We're very sad that he doesn't have his life, but we're so grateful he that he didn't take someone else's," Stefanie Sanders said. "And that we have our baby back."