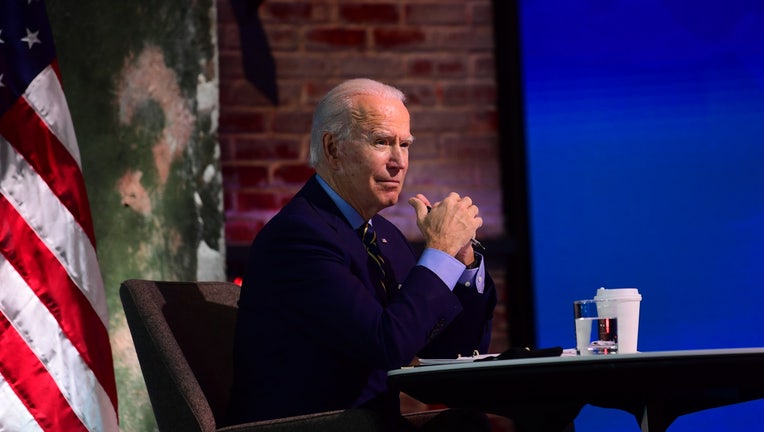 President-elect Joe Biden is briefed by expert members of his national security and foreign policy agency review teams at the Queen Theater on December 28, 2020 in Wilmington, Delaware. Biden will be inaugurated as the 46th president in a scaled-down

WASHINGTON - The theme for President-elect Joe Biden’s inauguration will be "America United," an issue that’s long been a central focus for Biden but one that’s taken on added weight in the wake of the violence at the U.S. Capitol last week.

In an announcement shared first with The Associated Press, the Presidential Inaugural Committee said that the theme "reflects the beginning of a new national journey that restores the soul of America, brings the country together, and creates a path to a brighter future."

In keeping with the theme of unity, the committee also announced that after he is officially inaugurated, Biden, Vice President-elect Harris and their spouses will lay a wreath at the Tomb of the Unknown Soldier in Arlington National Cemetery, and will be joined there by former Presidents Barack Obama, George W. Bush, Bill Clinton and their wives. It will be one of Biden’s first acts as president, and a show of bipartisanship at a time when the national divide is on stark display.

The focus on unity has characterized Biden’s presidential run from the start, and he’s said repeatedly since winning the White House he sees unifying the country as one of his top priorities as president. But the scope — and urgency — of the challenge Biden faces became even clearer this week after President Donald Trump sparked an armed insurrection at the Capitol, spurred by his repeated attempts to delegitimize Biden’s win.

Security will be tight. The National Park Service announced Monday it would shut down public access to Washington monument until Jan. 24, citing threats surrounding the inauguration.

Trump himself is skipping Biden’s inaugural, a decision Biden said was a "good thing," though Vice President Mike Pence and his wife plan to attend.

"This inauguration marks a new chapter for the American people — one of healing, of unifying, of coming together, of an America united," said PIC CEO Dr. Tony Allen. "It is time to turn the page on this era of division. The inaugural activities will reflect our shared values and serve as a reminder that we are stronger together than we are apart, just as our motto ‘e pluribus unum’ reminds us -- out of many, one."

The committee also announced plans for a major public art display spanning multiple blocks of the National Mall that will feature 191,500 U.S. flags and 56 pillars of light, to represent every U.S. state and territory. After Biden asked Americans to stay home for his inauguration, the "Field of Flags" is meant to represent "the American people who are unable to travel" to the Capitol to celebrate his swearing-in, according to the committee.

It’s not the only COVID-era change to the festivities. In keeping with crowd-size restrictions to slow the spread of the virus, Biden will have a significantly pared-down inauguration, with traditional activities like the parade and the inaugural balls moving to a virtual format. But even as the celebration itself will be smaller, inauguration officials are preparing a significant security presence in preparation for what may be more pro-Trump demonstrations across Washington.