Actor and comedian Bill Cosby is set to be released from prison Wednesday after the Pennsylvania Supreme Court overturned his sexual assault conviction.

The court found that an agreement with a previous prosecutor prevented Cosby from being charged in the case.

Cosby has served more than two years of a three- to 10-year sentence at a state prison near Philadelphia. He had vowed to serve all 10 years rather than acknowledge any remorse over the 2004 encounter with accuser Andrea Constand.

In 2002, Cosby met Constand at Philadelphia's Temple University, his alma mater, where she managed the women's basketball team and he served as a celebrity booster and trustee. 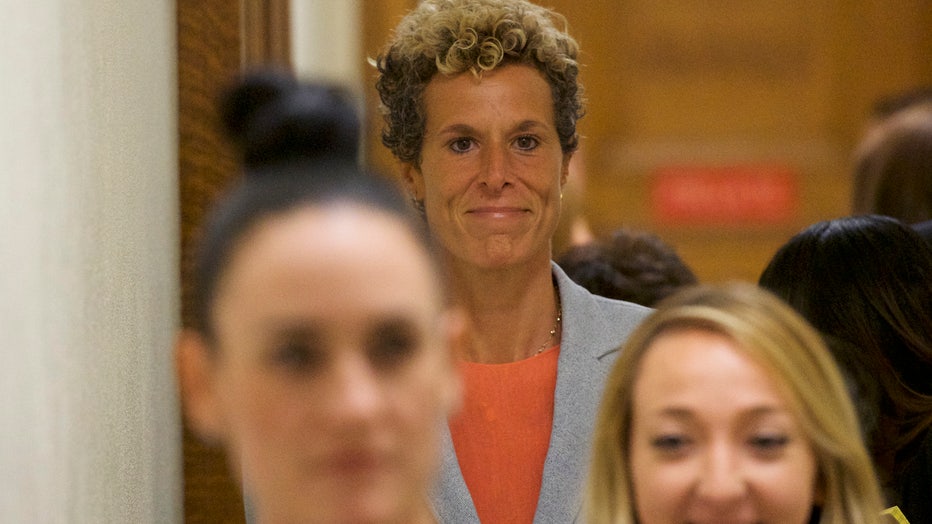 Bill Cosby accuser (C) Andrea Constand reacts after he was sentenced to 3-10 years in the assault retrial at the Montgomery County Courthouse on September 25, 2018 in Norristown, Pennsylvania. (Photo by Mark Makela/Getty Images)

In 2004, Cosby allegedly drugged and assaulted Constand at his suburban Philadelphia home.

The timing is important because Cosby was charged only a few days before the statute of limitations was set to kick in. Cosby previously said he gave her three blue pills to alleviate stress before lying on the couch with her and engaging in sex acts.

Bill Cosby's sex assault conviction was overturned by Pennsylvania’s highest court. The court said Wednesday that they found an agreement with a previous prosecutor that prevented him from being charged in the case.

In 2005, Constand, back home in suburban Toronto, told her mother something happened with Cosby. They went to the police, who suggested they record Cosby on a phone call.

On the call, Cosby said he engaged in "digital penetration," but refused to say what pills he gave Constand.

Montgomery County District Attorney Bruce Castor announced that he would not charge Cosby. He considered the case weak, citing the yearlong delay, Constand's continued contact with Cosby, and the failure of other accusers coming forward to have ever filed a police complaint.

Constand sued Cosby for sexual battery and defamation, and the actor settled the case for nearly $3.4 million after giving four days of deposition testimony about his affairs with young women over a span of 50 years.

A confidentiality agreement prevented either side from discussing the case, and the settlement amount was only released during the subsequent criminal trial.

Pennsylvania’s highest court overturned Bill Cosby’s sex assault conviction after finding an agreement with a previous prosecutor prevented him from being charged in the case.

After comedian Hannibal Burress called Cosby a rapist in a standup act caught on video and shared online, 60 women came forward and accused Cosby of assaulting them.

Supermodel Janice Dickinson told Entertainment Tonight that Cosby drugged and assaulted her in 1982. She told the outlet that the two had dinner in Lake Tahoe and Cosby supplied her with red wine and a pill after she asked for medication for stomach pains.

A nurse, Therese Serignese, told The Huffington Post Cosby had raped her. She told the outlet that she met Cosby in 1976 at a Las Vegas hotel after he invited her to one of his shows. She said when the two were left alone in his hotel room, Cosby supplied her with pills and water.

"The next memory I have was I was in a bathroom and I was kind of bending forward and he was behind me having sex with me," she told The Huffington Post. "I was just there, thinking ‘I’m on drugs, I’m drugged.’ I felt drugged and I was being raped and it was kind of surreal. My frame of mind was that it would be over soon and I could just get out of there."

"He pinned me against the corner in that guest house," Butterfield told the Daily News about the alleged Dec. 24, 1974, incident. "I said, 'Your family's here! What are doing?' That didn't faze him."

"He was aggressive," Butterfield further told the outlet. "He didn't rape me and he didn't drug me, but he cornered me. It was so nasty, trying to get a quick kiss and touch my boobs."

Montgomery County authorities reopened the 2005 criminal allegation, aware that the 12-year statute of limitations for aggravated sexual assault was set to expire.

The former "Cosby Show" star and breaker of racial barriers was charged with aggravated indecent assault, punishable by five to 10 years in prison and a $25,000 fine.

Cosby was arrested, entered a not guilty plea and was released on $1 million bail.

Prosecutors accused Cosby of plying former Temple University employee Constand with pills and wine, then penetrating her with his fingers without her consent while she was drifting in and out of consciousness, unable to resist or cry out.

She was "frozen, paralyzed, unable to move," Steele said. In court papers, prosecutors said the drugs were the cold medicine Benadryl or some other unidentified substance. Steele noted that Cosby admitted to giving quaaludes to women he wanted to have sex with.

Cosby acknowledged under oath a decade ago that he had sexual contact with Constand but said it was consensual.

RELATED: Bill Cosby appears to be smiling in latest mugshot

After more than 52 hours of deliberations over six days at Cosby’s first trial, jurors reported that they were hopelessly deadlocked, prompting the judge to declare a mistrial.

By sowing doubt among one or more jurors, Cosby’s lawyers managed to overcome two years of unrelenting bad publicity for their client after the public release of his damaging testimony about drugs and sex, as well as a barrage of accusations from 60 women who came forward to accuse him of sexual assault.

Constand told jurors Cosby gave her pills that made her woozy and then assaulted her as she lay paralyzed on a couch, unable to tell him to stop. The 2004 encounter at Cosby’s suburban Philadelphia estate was the only one to result in criminal charges.

University of Pennsylvania law professor David Rudovsky, a criminal lawyer in Philadelphia, said that the jurors’ inability to agree on a verdict didn’t surprise him, given the nature of a case that boiled down to Cosby’s word against his accuser’s and the legal meaning of consent.

Prosecutors immediately announced they would put him on a trial a second time.

Judge Steven O'Neill agreed to let five additional accusers testify at the retrial, giving prosecutors a chance to portray Cosby as a serial predator who drugged and molested women.

The defense argued that "ancient allegations" would confuse, distract and prejudice the jury.

The judge gave Cosby's legal defense a huge lift by saying they could call a witness, Marguerite Jackson, who said Constand talked about framing a celebrity before she lodged sexual abuse allegations against Cosby in 2005.

The judge ruled that jurors could hear how much Cosby ultimately paid Constand in the 2006 civil settlement.

Cosby was convicted on three counts of aggravated indecent assault. His lawyer said the "fight is not over" and vowed to appeal.

The verdict, in the first big celebrity trial of the #MeToo era, sealed the spectacular late-in-life downfall of an entertainer who broke racial barriers in Hollywood on his way to TV superstardom as sweater-clad, wisdom-dispensing Dr. Cliff Huxtable.

Cosby stared straight ahead as the verdict was read but moments later lashed out loudly at Steele after the prosecutor demanded Cosby be sent immediately to jail. Steele told the judge Cosby had an airplane and might flee.

Cosby angrily denied he had a plane and called Steele an "a--hole," shouting, "I’m sick of him!"

"Justice has been done!" celebrity attorney Gloria Allred, who represented some of Cosby’s accusers, said on the courthouse steps. "We are so happy that finally we can say women are believed."

The Pennsylvania Supreme Court said that District Attorney Kevin Steele, who made the decision to arrest Cosby, was obligated to stand by his predecessor’s promise not to charge Cosby when he later gave potentially incriminating testimony in Constand’s civil suit. There was no evidence that promise was ever put in writing.

Justice David Wecht, writing for a split court, said Cosby had relied on the former prosecutor’s decision not to charge him when he later gave potentially incriminating testimony in the Constand’s civil suit.

They said that overturning the conviction, and barring any further prosecution, "is the only remedy that comports with society’s reasonable expectations of its elected prosecutors and our criminal justice system."

"My hope is that this decision will not dampen the reporting of sexual assaults by victims," Steele said in a statement. "Prosecutors in my office will continue to follow the evidence wherever and to whomever it leads. We still believe that no one is above the law—including those who are rich, famous and powerful."

"I want to commend Cosby’s victim Andrea Constand for her bravery in coming forward and remaining steadfast throughout this long ordeal, as well as all of the other women who have shared similar experiences," he continued.

The Associated Press and WTXF contributed to this report. This story was reported from Los Angeles.