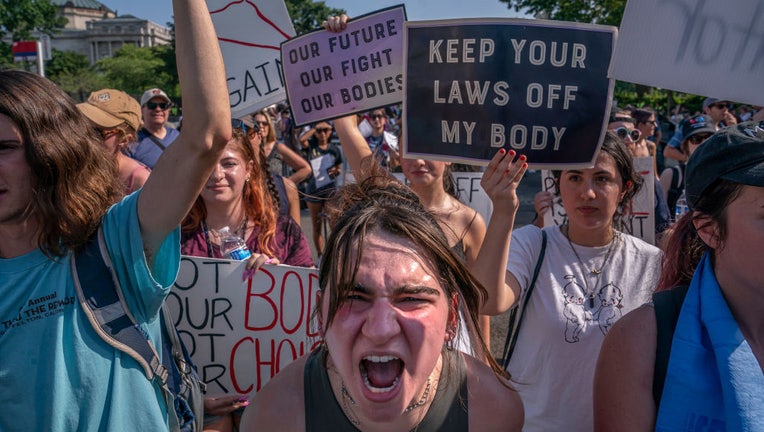 FILE-Abortion-rights activists argue with anti-abortion activists in front of the Supreme Court on June 26, 2022 in Washington, DC. (Nathan Howard/Getty Images)

Sixteen-year-old Adismarys Abreu had been discussing a long-lasting birth control implant with her mother for about a year as a potential solution to increasing menstrual pain.

Then Roe v. Wade was overturned, and Abreu joined the throng of teens rushing to their doctors as states began to ban or severely limit abortion.

"I’m definitely not ready to be pregnant," said Abreu, who had Nexplanon — a reversible, matchstick-sized contraceptive — implanted in her arm in August. Her home state of Florida bans most abortions after 15 weeks, and not having that option is "such a scary thought," she said.

Experts say the U.S. Supreme Court’s June ruling appears to be accelerating a trend of increased birth control use among teens, including long-acting reversible forms like intrauterine devices and implants. Appointments have surged and Planned Parenthood has been flooded with questions as doctors report demand even among teens who aren’t sexually active.

Some patients are especially fearful because the new abortion laws in several states don't include exceptions for sexual assault.

RELATED: Louisiana woman carrying fetus with no skull forced to travel to New York to get abortion

"Please, I need some birth control in case I get raped," patients tell Dr. Judith Simms-Cendan, a pediatric-adolescent gynecologist in Miami, where state law does not provide exceptions for rape or incest after 15 weeks.

Simms-Cendan, the president-elect of the North American Society for Pediatric and Adolescent Gynecology, said parents who might have been hesitant in the past now want to discuss birth control.

"It’s a sea change of, ‘I don’t have room to play. We have got to get my child on something,’" she said.

Teens already were shifting to more effective long-acting forms of birth control, which have similar or even lower failure rates than sterilization, said Laura Lindberg, a professor at Rutgers University’s School of Public Health in New Jersey.

RELATED: VA to offer abortions to veterans in certain cases

No national data is available for the months since Roe was overturned, said Lindberg, who previously worked for nearly two decades at the Guttmacher Institute, a research group that supports abortion rights.

But she said "major ripple effects" have to be expected from the loss of abortion access and noted that it wouldn’t be the first time politics have led to a shift in birth control usage.

In the weeks after former President Donald Trump’s election, as women raised concerns online that the Affordable Care Act would be repealed, demand for long-acting birth control rose by nearly 22% across all age groups, according to a 2019 research letter published in JAMA Internal Medicine.

In Ohio, where a judge this month blocked a ban on virtually all abortions, patients — both male and female — now listen with rapt attention to the contraception talk that Dr. Peggy Stager has long made a part of routine appointments at her pediatric practice in Cleveland.

Stager said her practice’s dedicated spots for insertion of the Nexplanon implant are consistently filled, and requests for contraceptive refills have increased 30% to 40% since Roe was overturned. Recently, she talked to a college-bound student who wasn’t sexually active but decided to get an IUD anyway.

"She was real clear: ‘I want to have a great four years without any worry,’" recalled Stager, who is the chair of the section on adolescent health at the American Academy of Pediatrics. "And that’s a change."

In Missouri, among the first states in the country with a trigger law in effect to ban abortions at any point in pregnancy, Dr. David Eisenberg also has seen a similar sense of urgency from college-bound teens to choose the most effective option.

"Fear is an amazing motivator," said Eisenberg, an associate professor at the Washington University School of Medicine in St. Louis, who performs abortions in neighboring Illinois. "They understand the consequence of a contraceptive failure might mean they become a parent because they might not be able to access an abortion."

Interest is also high at the contraception clinic that Dr. Elise Berlan oversees in Columbus, Ohio. Before the Supreme Court's decision, the clinic booked appointments for new patients within a week or two.

Now, they are booking several months out for first appointments, said Berlan, an adolescent medicine specialist who sees mothers and daughters in tears in her exam room. She said the demand is so high they are adding a provider.

On the day the Supreme Court ruled against Roe, twice as many birth control questions as normal poured into Roo, Planned Parenthood’s online chatbot aimed at teens.

Online birth control appointments also skyrocketed that day — up 150% from a typical day, with an even-larger 375% surge for IUD-seekers, said Julia Bennett, director of digital education and learning strategy for Planned Parenthood Federation of America.

By mid-July, several weeks after the ruling, birth control appointments remained up about 20%, although the data isn't broken down by age group.

The growing interest exists even in states like North Carolina, where abortion remains legal but the Legislature is conservative.

Dr. Kavita Arora, an obstetrician-gynecologist in Chapel Hill, said she saw maybe one teen a month before the ruling. Now, she said, she sees them at each clinic session.

"They’re aware that this is an incredibly fluid situation, and what is allowed at one moment may not be allowed a week or a month later," said Arora, the chair of the American College of Obstetricians and Gynecologists’ Committee on Ethics.

That uncertain future is part of what motivated Abreu, the Florida teen, whose implant will prevent pregnancy for up to five years.

"I don’t know what’s going to happen with the laws in that time period," said Abreu, who was using a short-acting form of birth control before switching. "Having this already in my arm, it makes me feel so much safer."

Her mother, Maribys Lorenzo, said in Spanish that she, too, is a little more at peace knowing her daughter cannot get pregnant and said she would recommend the implant because it does not require her daughter to remember to take a contraceptive pill.

She said she is not worried, any more or less, that her daughter will become sexually active because of the implant. But if it happens, she will be protected, Lorenzo said.

"I don’t think that’s fair to me or my family to not have abortion as an option," said her daughter, Abreu.

Roxana Hegeman in Wichita contributed to this report. Rodgers is a corps member for the Associated Press/Report for America Statehouse News Initiative. Report for America is a nonprofit national service program that places journalists in local newsrooms to report on undercovered issues.