OKLAHOMA CITY (AP) - Black police officers find themselves torn between two worlds: They feel the pain of seeing yet another black man killed at the hands of fellow officers, yet they must also try to keep the peace during angry protests fueled by that death.

Those feelings, familiar to many blacks in law enforcement for years, have never been more intense than in the days since George Floyd, a black man in Minneapolis, died after a white officer jammed his knee into Floyd's neck for nearly 9 minutes as other officers watched.

RELATED: On what would have been Breonna Taylor’s 27th birthday, here is where her case stands

“My emotion, my fervor is no less than those people on the streets," said New York City police Detective Felicia Richards, who is black. “I stand in this uniform, and I understand what my obligation is to this uniform, but I can’t compromise my humanity.”

Richards, president of the NYPD Guardians Association, a fraternal organization, said she was horrified by the video that captured Floyd's arrest and final moments. She struggled to understand what could possibly have warranted such “brute force.”

Floyd, a 46-year-old out-of-work bouncer, was being arrested May 25 after a convenience store employee accused him of using counterfeit money. He was handcuffed and did not appear to be resisting the officers.

Black police officers who saw the footage "let out a sigh of disgust and abandonment right there,” Richards said. "When we saw that man was not moving, we have to answer to the community.”

Richards, a 34-year veteran of the NYPD, said the toll on officers' mental health runs deep. They cannot grieve with the rest of the black America, and many of them must meet a seething public.

The National Black Police Association was blunt in its assessment of Floyd's death and how law enforcement has historically treated black citizens. 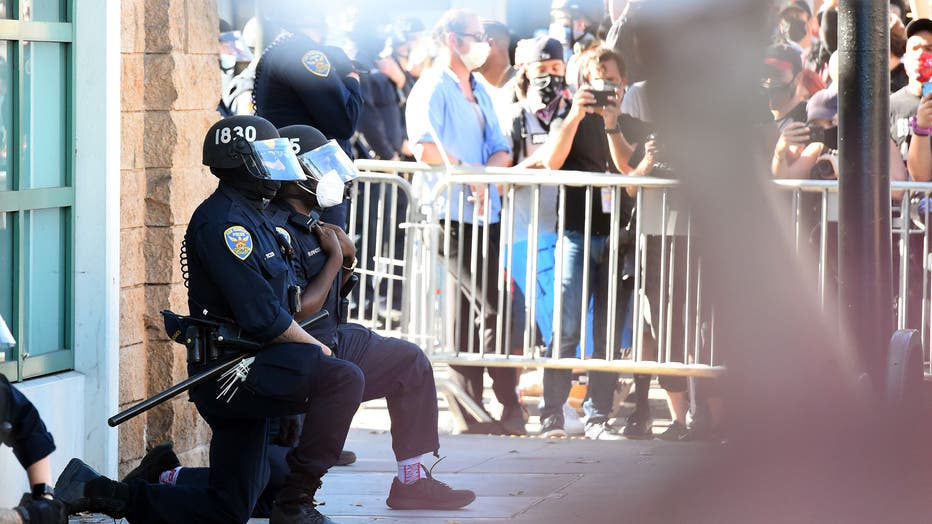 FILE - San Francisco police officers kneel after a crowd of protesters called for them to "take a knee" in front of a police station in San Francisco, California on June 3, 2020. (Photo by JOSH EDELSON/AFP via Getty Images)

“Let’s speak truths: In America, it is clear that the humanity of black people appears invisible to law enforcement,” it said in a statement. “What other explanation would there be for (Minneapolis Police Officer Derek) Chauvin to lean on the neck of a handcuffed black man until he dies?”

The group cited recent images of armed white men converging on the Michigan Capitol to protest stay-at-home orders intended to curb spread of the coronavirus.

“Armed white men are allowed to stand on the steps of government buildings and protest that their liberty is being stepped on, unchallenged by law enforcement. But too often, when unarmed black citizens are alleged to have committed minor violations, freedom is no longer at play, and the door opens for death at the very hands of those who should be protecting and serving," the organization said.

Since police killings gave rise to the Black Lives Matter movement, police departments have sought to better diversify their ranks. But minorities remain underrepresented in many agencies. For example, of the 36,000-plus officers in the New York Police Department, 17,000 are white, while 5,500 are black.

Police work in the U.S. has been challenging for black officers since the beginning.

In 1965, sheriff's deputies O’Neal Moore and David Creed Rogers were ambushed in Varnado, Louisiana, while investigating a brush fire. Moore was killed, and Rogers was blinded in his right eye. According to Justice Department files on the attack, the two had been on the job for one year and were the first black deputies in the department. Their hiring infuriated the Ku Klux Klan.

Mike Render, a member of the popular rap duo Run The Jewels and known as Killer Mike, spoke tearfully during a news conference last week in Atlanta about his love for family members in law enforcement. His father was a police officer, as are two cousins.

He recalled that the first eight black officers on the Atlanta department, who joined the force nearly a century ago, had to get dressed at a YMCA because their fellow white officers did not want to be in the same locker room with them.

“I’m mad as hell,” he said. “I woke up wanting to see the world burn yesterday, because I’m tired of seeing black men die. He compared Floyd's death under the officer's knee to that of a zebra "in the clutch of a lion’s jaw.”

Some have sought to bridge the divide between demonstrators and fellow officers. In Florida, Fort Lauderdale officer Krystle Smith was lauded after a video went viral of her chasing and reprimanding a fellow officer after he pushed a protester to the ground who was already kneeling.

Officer Jasmine Nivens spoke with a group of protesters in Charlotte, North Carolina, to ease tensions. She told them that she could not defend the officers in Minneapolis. But when she's on the job, she does her best to hold her fellow officers accountable and has told some of them to “ease up.”

“I'm hurt the same way you hurt. ... I understand your pain,” said Nivens, part of the Charlotte-Mecklenburg Police Department's “constructive conversation” team, which makes a point of talking with the public during demonstrations. The unit was created after protests erupted in that city following the 2016 police shooting death of Keith Lamont Scott.

Some officers say they too have experienced racism — on and off the job.

Norman, Oklahoma, officer Ralph Manous recalled an experience while attending Missouri State University. He was walking home from his overnight job when he started to hear honking from a truck in the distance.

“Somebody threw a full beer at my head. And so I instantly took off running. And they chased me, throwing beers, a whole bunch of racial slurs, stuff like that," Manous said. As a former junior college wrestler, he was still athletic enough to escape after jumping some fences and hiding behind a backyard shed.

Even as an officer, he is leery of other police. When he leaves Norman, he hangs his wallet badge on his rearview mirror to make sure if he is pulled over, officers immediately know he’s one of them.

He’s been to protests in Norman. He said the response from black people is usually negative when they find out he’s an officer.

“They typically start to clam up and get secretive or think that I’m out to get them,” he said. “They crack the little sly jokes. I get where they are coming from."

Once, when he was the first officer to show up on a call for a disturbance, the man who answered the door wouldn’t speak to him or let him into the house. When his white partner arrived, the man immediately explained everything to the other officer. When it was time to leave, the man shook his partner’s hand but turned his back on Manous and walked away.