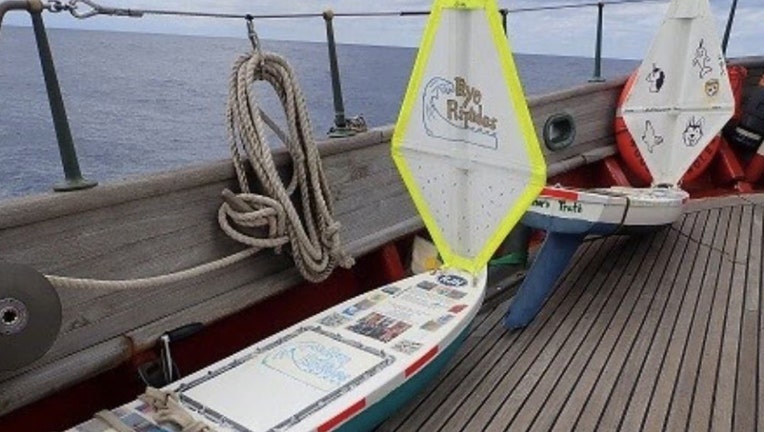 Just sit right back and you'll hear a tale – about the incredible 8,000-mile journey of a mini boat launched by New Hampshire students that washed ashore on a small island in Norway after 462 days.

The organization sends kits to teachers that include boat parts and supplies. Students then use the supplies to build the boat and fill it with messages and other items before installing a GPS tracker and sending it out into the ocean. Students can track its progress and learn about the world's ocean currents, geography and other topics.

When the boat finally washes ashore somewhere in the world, a sticker asks for it to be brought to a local school where it can be opened and connect the two classrooms.

The Rye Riptides was built by students in science teacher Sheila Adams' class to learn about the ocean, science and math.

"The project tapped into so much more than the science curriculum," Adams said in a news release. "The students needed to use their writing skills to inform others about the mini boat project, describe our school and town to people of other languages, just in case, and write requests to get the boat deployed."

Adams said the students were excited to complete the project and paint the boat when COVID-19 sent students home for the rest of the year.

"But they continued to collaborate and see the project through," Adams said.

Since the students were learning virtually, Adams and Educational Passages director Cassie Stymiest put the finishing touches on the boat and asked students to send in artwork that was then printed and adhered to the boat's deck.

Over the summer, the search was on to find a vessel that could take the boat out to sea but found it difficult with all the COVID restrictions in place.

At the start of the school year, new students were asked what colors to paint the bottom of the boat and what messages to include in the cargo hold.

The Sea Education Association in Woods Hole, Massachusetts, volunteered to launch the boat alongside another one built by students from a school in Northampton, Massachusetts.

They were both launched aboard the SSV Corwith Cramer on October 25, 2020.

But after 10 months at sea, the project hit a snag.

The GPS began only to send intermittent signals during hurricane season and then stopped altogether until September 30, 2021. Then on January 30 of this year, it reported one more time from a small island in Smøla, near Dyrnes, Norway.

The Nuncic family discovered the boat, who lived nearby, after Educational Passages posted to social media that the boat had washed ashore in the area.

The boat had undoubtedly taken a beating while at sea for 462 days.

The hull and keel were no longer attached, but the deck and cargo hold had remained intact and were still sealed.

The Nuncic family cleaned off the barnacles that had grown on the boat during its voyage and brought it home. Karel, a 6th-grade student in Norway, brought the boat to his school.

Students opened the cargo hold and discovered the messages and other items inside that the students in Rye had added nearly two years before.

The story was also shared on national news across Norway.

"This was a great project and opportunity for our students. It's amazing to see all their work and the work of Ms. Adams come to fruition in a way that connects us with students across the world. We are fortunate to have these opportunities for authentic learning," Rye Junior High School principal Marie Soucy said.

The students are now planning on connecting with each other through video calls to build a new friendship and learn more about the Atlantic Ocean.