The tail of a British Airways plane touched the tarmac during an aborted landing at Heathrow Airport in footage posted on Jan. 31, 2022. Credit: Big Jet TV via Storyful

LONDON - A British Airways pilot in the U.K. was forced to abort an attempted landing at Heathrow Airport as the plane was hit with strong winds brought by Storm Corrie, one of two storms that have battered the country in recent days.

A video captured on Monday by aviation channel Big Jet TV showed British Airways flight 1307, which had departed from Aberdeen, tilt toward its left side as it approached the runway in London. The tail of the plane then appears to clip the ground in what’s known as a "tail strike."

"Easy! Easy! Easy! Oh my god," a person can be heard saying in reaction to the attempted landing.

The plane aborted the landing and flew back up into the air. It later landed safely and all passengers and crew disembarked as normal, according to the airline.

Big Jet TV, which features many planes landing and taking off on its YouTube channel, said the pilot "deserves a medal" after taking a closer look at the attempted landing.

"A full-on Touch and go, with a tail strike - checkout the paint dust after contact! You can also see the empennage shaking as it drags," the channel wrote in a video description of the moment. 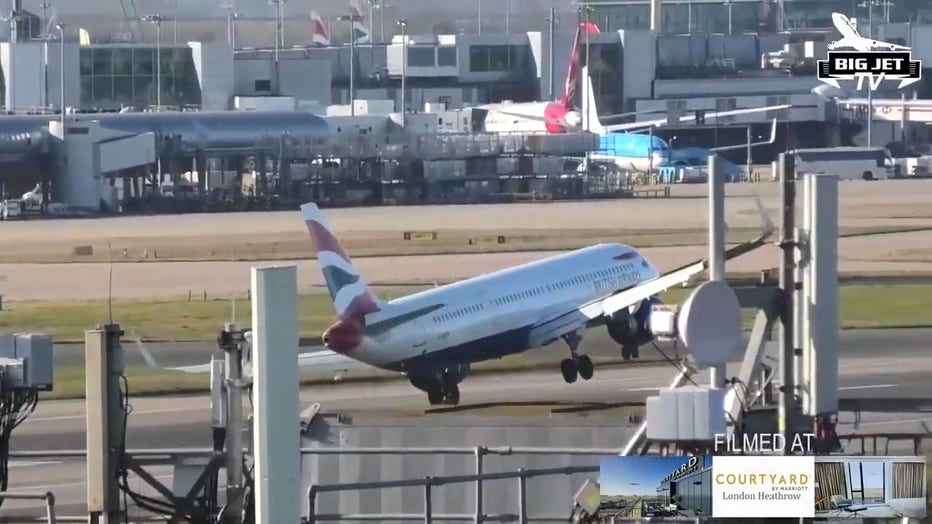 The British Airways plane is pictured in a screengrab in the attempted landing at Heathrow Airport on Jan. 31, 2022, in London, England. (Credit: Big Jet TV via Storyful)

A British Airways spokesperson later said in a statement to various news outlets that the airline’s pilots "are highly trained to manage a range of scenarios, including extreme weather conditions."

Strong winds from Storm Corrie blasted the U.K., including gusts of up to 92 mph in the Western Isles of Scotland late on Sunday, according to meteorologists.

Some 600 miles south in the London area, Big Jet TV said a gap between buildings where the plane was landing allows wind gusts "to flow unrestricted across the runway," which presumably led to the precarious landing.

Corrie and Storm Malik, another weekend storm, caused power outages thousands of homes in Scotland northern England, according to the BBC. Two people were killed Saturday by falling trees amid the storms, the news outlet reported.