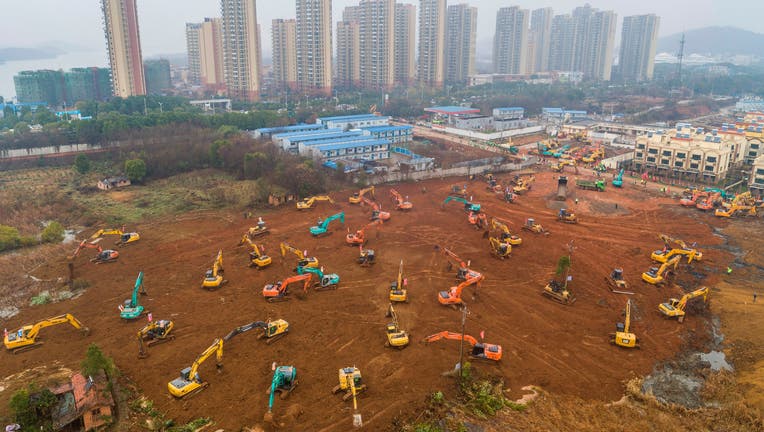 TOPSHOT - This aerial photo on January 24, 2020 shows excavators at the construction site of a new hospital being built to treat patients from a deadly virus outbreak in Wuhan in China's central Hubei province. - China is rushing to build a new hospi

Japanese officials, meanwhile, were deciding whether to quarantine more than 3,000 people on a cruise ship that carried a passenger who tested positive for the virus.

Chinese health authorities reported 361 deaths and 17,205 confirmed cases, an increase of 2,829 over a 24-hour period, as other countries continued evacuating citizens from hardest-hit Hubei province and restricted the entry of Chinese or people who recently traveled to the country. The World Health Organization said the number of cases will keep growing because tests are pending on thousands of suspected cases.

Chinese President Xi Jinping, presiding over a special meeting of the country's top Communist Party body for the second time since the crisis started, said “we have launched a people's war of prevention of the epidemic.”

He told the Politburo standing committee that the country must race against time to curb the spread of the virus and that those who neglect their duties will be punished, state broadcaster CCTV reported.

Medical teams from the People's Liberation Army were arriving in Wuhan, the capital of Hubei province, to relieve overwhelmed health workers and to staff the new 1,000-bed hospital, located in the countryside far from the city center. 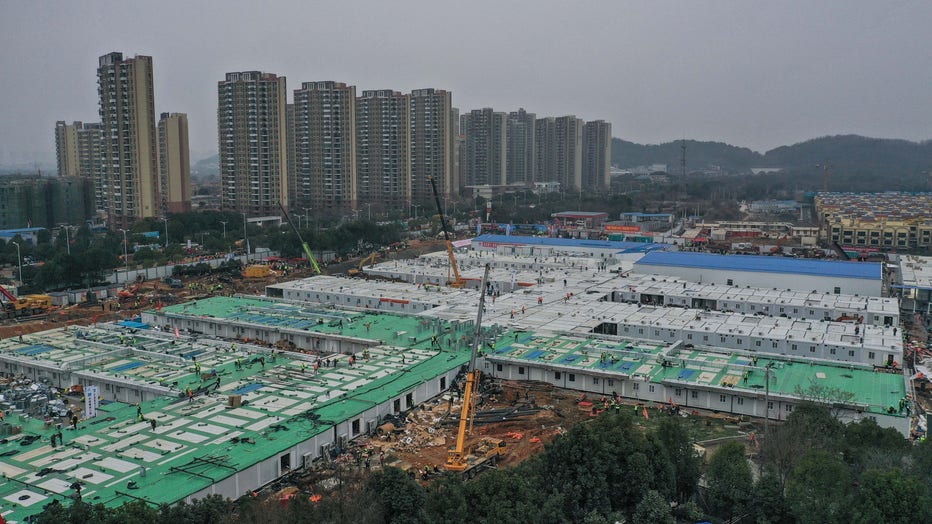 Its prefabricated wards are equipped with state-of-the-art medical equipment and ventilation systems. A second hospital with 1,500 beds is due to open within days.

“The lack of hospital rooms forced sick people to return home, which is extremely dangerous," Chinese epidemiologist Zhong Nanshan told CCTV. "So having additional (beds) available is a great improvement.”

China's Shanghai Composite stock index plunged nearly 8% on the first day of trading after the Lunar New Year holiday, despite a central bank announcement that it was putting 1.2 trillion yuan ($173 billion) into the markets.

"We are fully confident in and capable of minimizing the epidemic's impact on the economy," Lian Weiliang, deputy chief of the National Development and Reform Commission, said at a news conference in Beijing.

With the holiday ending, many companies required employees to work from home to minimize the risk of infection. Volkswagen said its 3,500 employees in Beijing would do so for two weeks.

Related: After 8th U.S. coronavirus case is confirmed, some in Chicago say they might avoid Chinese New Year events

Xing Xuemei, the manager of Dohia, a bedding and household supplies store in the city of Zhengzhou, said it won't open until Feb. 9. She said all the stores in her mall were closed except for a Carrefour supermarket.

Hong Kong's leader, Carrie Lam, announced that the semi-autonomous territory will shut almost all but two land and sea border crossings with the mainland at midnight to stem the spread of the virus. Only the land checkpoints at Shenzhen Bay and the bridge to Macao and Zhuhai will remain open.

More than 2,000 hospital workers went on strike earlier in the day, demanding a complete closure of the border, and their union has threatened a bigger walkout Tuesday.

Hong Kong was hit hard by SARS, or severe acute respiratory syndrome, in 2002-03, an illness from the same family of viruses as the current outbreak and which many believe was intensified by official Chinese secrecy and obfuscation.

“In essence, it’s a version of SARS that spreads more easily but causes less damage,” Ian Jones, a professor of virology at the University of Reading in Britain, said about the new virus.

Chinese scientists said they have more evidence that it likely originated in bats. In a study published in the journal Nature, Shi Zhen-Li and colleagues at the Wuhan Institute of Virology reported that genome sequences from seven patients were 96% identical to a bat coronavirus.

SARS is also believed to have originated in bats, although it jumped to civet cats before infecting people. Scientists suspect the latest outbreak began at a seafood market in Wuhan where wild animals were on sale and in contact with people.

Related: Traditional surgical masks do not protect from the coronavirus

Meanwhile, Japanese health officials said a passenger on a Japanese-operated cruise ship tested positive for the virus after leaving the vessel in Hong Kong on Jan. 25.

The Diamond Princess returned to Yokohama carrying more than 3,000 passengers and crew after making port calls in Vietnam, Taiwan and Okinawa. A team of quarantine officials and medical staff boarded the ship Monday and began medical checks of everyone on board, a health ministry official said, speaking on condition of anonymity in keeping with department rules.

The passengers and crew members may be quarantined on the ship if the captain agrees to do so, the official said.

The ship's captain said Hong Kong's health authorities notified the ship about the passenger's infection on Saturday, six days after he got off the ship after not being caught on thermal screening, according to a recording of the announcement tweeted by a passenger. The patient is currently recovering and is in stable condition, and his traveling companions so far have not been infected, the captain said.

“I wish we were informed as soon as they found out, then I could have worn a mask or washed hands more carefully," the passenger said. “I was in Hong Kong nine days ago and it seems to be too late now.”

South Korea, which has 15 confirmed cases, quarantined 800 soldiers who had recently visited China, Hong Kong or Macao or had contact with people who had, defense ministry spokeswoman Choi Hyunsoo said.

The Philippines banned the entry of all non-citizens from China after two cases were confirmed there, including the only death outside China. The U.S., Japan, Singapore, Indonesia, New Zealand and Australia have imposed similar restrictions despite criticism from China and WHO's guidance that such measures were unnecessary.

About 150 cases have been reported in two dozen other countries. Vietnam's confirmed cases increased to eight, including a Vietnamese American man who had a two-hour layover in Wuhan on his way from the U.S. to Ho Chi Minh City.

At a daily briefing held via text message because of the virus, foreign ministry spokeswoman Hua Chunying accused the U.S. of acting against WHO advice and “spreading fear."

“The U.S. government hasn’t provided any substantial assistance to us, but it was the first to evacuate personnel from its consulate in Wuhan, the first to suggest partial withdrawal of its embassy staff, and the first to impose a travel ban on Chinese travelers," Hua said.

The head of the World Health Organization said Monday in Geneva that it was working with Google to ensure that searches about the new virus turned up information from the U.N. health agency first, part of efforts to fight “rumors and misinformation” about the outbreak. 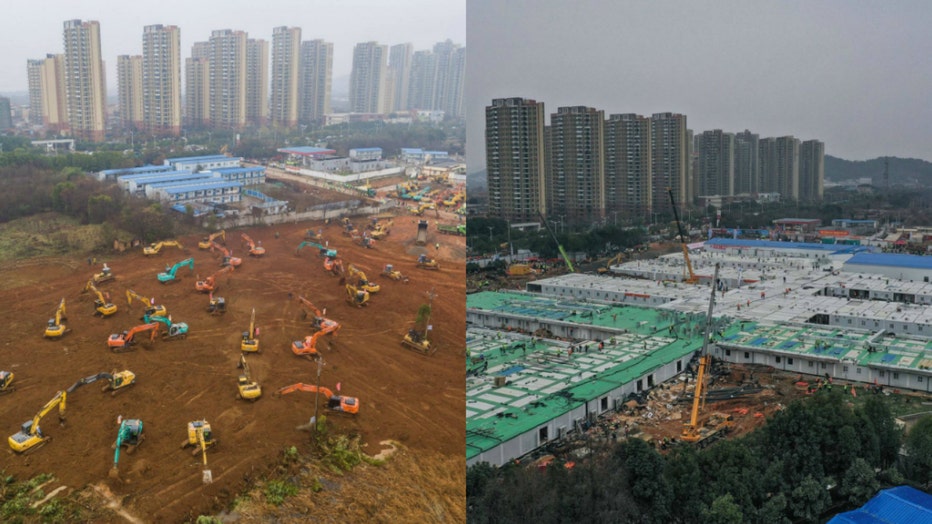 Built in 10 days, these are before and after photos of Huoshenshan Hospital in Wuhan, China. The hospital will treat patients diagnosed with the coronavirus. (Photos via Getty Images)

Tedros Adhanom Ghebreyesus told the opening of WHO's executive board meeting that social media platforms such as Twitter, Facebook, Tencent and TikTok “have also taken steps to limit the spread of misinformation.”

With no end to the outbreak in sight, authorities in Hubei and elsewhere extended the Lunar New Year holiday break, due to end this week, well into February to try to keep people at home and reduce the spread of the virus. All Hubei schools are postponing the start of the new semester until further notice.