The CDC is reporting that a potentially dangerous and untreatable 'superbug' has been found at a DC area nursing home.

ATLANTA - For the first time, the United States is seeing clusters of pan-resistant Candida Auris, — which the Centers for Disease Control and Prevention said indicates a spread within healthcare facilities.

C. Auris is an emerging fungus that can cause serious illness in hospitalized patients. It can live on the skin of someone, even if they're not infected themselves, and infect others. Infections can also occur in the bloodstream, a wound or the ear.

Most C. auris infections are treatable with a class of antifungal medications called echinocandins. But doctors say some infections are difficult to treat because they are resistant to the drugs.

It’s also difficult to identify with standard laboratory methods. Symptoms may not be noticeable because an infected person is often already hospitalized with another ailment.

And the fungus is particularly harmful to patients who already have medical problems, which is why it's crucial to avoid outbreaks in hospitals and nursing homes.

An untreatable 'superbug' fungus outbreak has been reported at two North Texas hospitals, the CDC reports.

Two hospitals in Dallas identified a cluster of 22 C. Aurus cases between January and April. Two of them were resistant to all three types of antifungal drugs.

And there is evidence of a cluster of 101 cases in a Washington D.C. nursing home during that same time period. Three of those cases involved infections resistant to treatment.

According to Dr. Meghan Lyman of the CDC’s Mycotic Diseases Branch, additional infections have been identified since April, but those numbers have not been reported.

"While we’ve only seen a small number of cases, it’s likely that there are more cases not being identified," Lyman said. "At present at least 10 cases were identified in two states that were either resistant to first-line treatment or resistant to all available treatment options."

Researchers first identified the fungus in 2009 and the United States dealt with its first care in 2015. Health officials have sounded alarms for years about the superbug after seeing infections in which commonly used drugs had little effect. 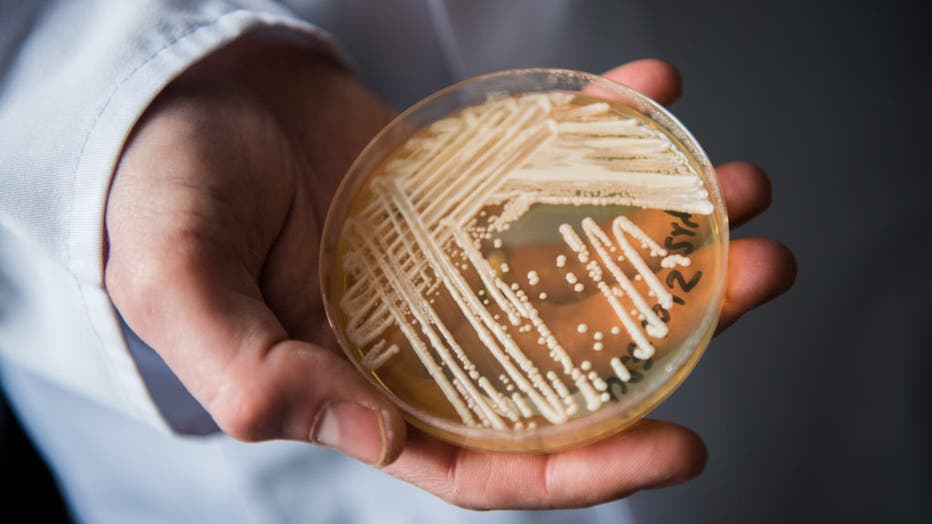 The director of the National Reference Centre for Invasive Fungus Infections, Oliver Kurzai, holding in his hands a petri dish holding the yeast candida auris in a laboratory of Wuerzburg University in Wuerzburg, Germany, Jan. 23, 2018.(Photo by Nico

Now, they’re calling on health care facilities to be proactive in identifying the fungus.

"We are urging healthcare facilities to take proactive steps to identify and prevent spread of this fungus so that it does not gain a foothold in their patient population," Lyman said.

The CDC encourages any laboratory that identifies C. auris to contact them at candidaauris@cdc.gov., as well as their state or local public health authorities.