While Tsar Nicoulai sounds Russian, it's not.

The business, with offices in Concord and a 50-acre farm in Winton, was started in 1984. The founders, a Swedish family in San Francisco, named the caviar company after the founder's grandfather, named Nicolai. They included "tsar" in the brand to give it an old-world, Eastern European flair, according to Tsar Nicoulai president and farm co-owner, Ali Bolourchi.

One handwritten letter told the owners to "go back to Russia or suffer severe consequences." He said he reported it to police and stepped up the café's security, including installing new cameras. 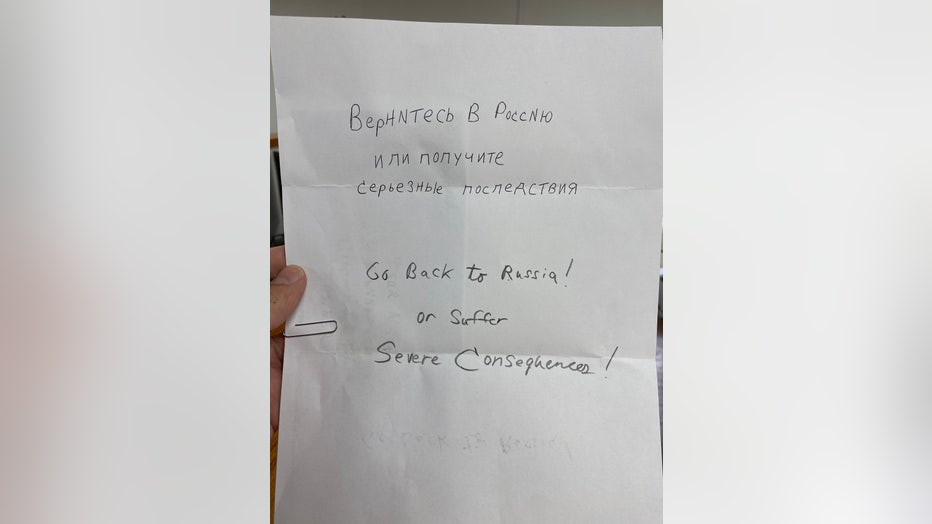 The owners of Tsar Nicoulai reported this letter to the police. It says, "go back to Russia or suffer severe consequences."

These symbols are meant to show support for the war-torn country, and also to defend the business against harassment, Bolourchi said.

Bolourchi estimates Tsar Nicoulai has seen a 50% dip in sales since the end of February.

Sometimes Bolourchi responds to angry online messages with details on the Tsar Nicoulai's history. Now and then, commenters end up sending an apology.

Pushkin, a Ukrainian-owned restaurant nearby, is facing similar harassment by people who mistake it for a Russian business.

Sergey Shukaylo, the owner, said he's changing the restaurant's name, no longer wanting to be associated with the iconic Russian writer and poet, Alexander Pushkin. The new name, Leleka, means "stork" in Ukrainian.

Bolourchi has considered a temporary name change, reverting to Tsar Nicoulai Caviar's initials, TNC, which the business at one time in its history went by.

But he isn't ready to go there yet.

"I think ultimately," Bolourchi said of the name, "it's part of our brand's identity."