A Rohnert Park teenager went missing from her home while her parents were asleep. KTVU's Debora Villalon reports on the strange note the girl left behind.

ROHNERT PARK, Calif. - A North Bay teenager has been missing since May 15 and her family is heartsick.

Because there is no evidence of abduction, they worry police aren't taking her case seriously.

"They're not using all the resources they could and pushing as hard as they could be," said her father, Ruben Prado.

Speaking about Veronica's disappearance for the first time on Tuesday, her parents said they are afraid she was manipulated by someone she met on social media.

"There is nothing she could not to make us not love her, we just want her to come back home," said mother Elizabeth Prado.

The couple describe Veronica as an obedient daughter who loves art, singing, and video games.

"We taught her everything about the dangers of the streets and social media, meeting strangers, she knows all this," said Ruben.

"We have nothing right now, absolutely nothing."

Bedtime on May 14 was an evening like any other at the family's apartment.

"She gave me a hug and said 'I love you, mom, for always being there for me,'" recounted Elizabeth, tearfully.  "When I work up the next day she was gone."

The days since have been a blur of confusion, fear and frantic searching.

Veronica, or Vero as she is known, is in 9th grade, home-schooled, happy and family-oriented, her parents say.

She has never run away before.

"Never talked about it, never threatened us with it, never," said her father.

Now, from Veronica's friends, they are learning she may have met a boyfriend on Hoop,  a social app connected to Snapchat.

It's aimed at ages 12 -18, connecting young people who share pictures and information.

Hoop is often referred to as "Tinder for teenagers" because it operates similarly to the dating app.

"Maybe she was lured to come out of the house and taken and now whoever has hold of her is in control," said Ruben.

Police say they are following tips, even out of state, but have no solid leads.

Astley says investigators have talked to Veronica's friends, and will talk to them again, to try to glean more information.

"The human trafficking threat is always hanging in the back of my mind," said Astley, "but I don't have any evidence to point to that."

Veronica did leave a cryptic note.

"It said, 'I'm leaving, I will be back, don't call the police, I have a surprise and give my money to my sisters,'" said Astley, "and then she's gone."

The teenager took her baby blanket, some family photos, and her cell phone plus the charger.

But there has been no activity on her phone.

"It's shut-off and knowing Veronica, she would have contacted her family, contacted someone, that's just not her," said uncle Nick Gutierrez.

Tuesday evening, a few dozen family member fanned-out in the area where the phone last pinged.

That happened at 3 am Friday, in an area behind the Walmart store in Rohnert Park.

They have searched the vicinity repeatedly, and Gutierrez has knocked at dozens of houses on nearby Labath and Millbrae Avenues,  looking for security video.

"We're pressing and pressing and all we're asking for is more assistance from the police department," said Gutierrez.

"You shouldn't have citizens who pay taxes out here doing it when that's what they should be doing."

When the family encountered Sgt. Astley and another officer during their search, emotions boiled over.

"I was down here investigating cameras the first day," charged Gutierrez, "and all that video is probably erased by now."

Added Ruben Prado, "If this was your daughter, you would be doing more."

But Astley says the department is working hard on the case.

"If they can find her before us, great, go for it," said Astley, "but we care and we are looking for her."

Veronica is the oldest of three girls.

"Your sisters love you so much and they miss you and they want you to come home," said mom Elizabeth, wiping away tears.

There is a $10,000 reward for information bringing Prado safely home.

The family has also established a GoFundMe account to raise money to hire a private investigator to assist the search. 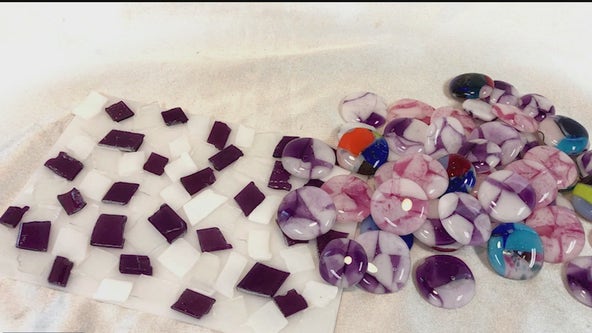