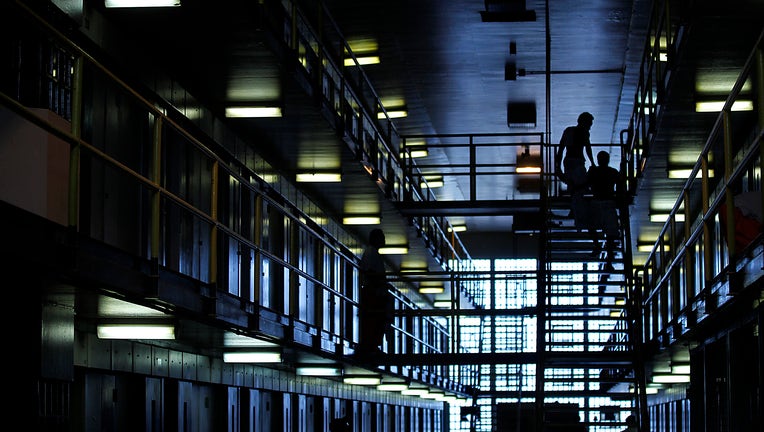 Inmates return to their celss after showering in a cellblock at Deuel Vocational Institution in Tracy. Built in 1953, the rpison currently houses more than 3,700 convicts in a facility designed for about 1,700 inmates. It serves primarly as a recepti

SACRAMENTO, Calif. - California should allow all but death row inmates and those serving life-without-parole to request lighter sentences after serving at least 15 years as part of a dramatic overhaul of the state’s sentencing laws recommended Tuesday by an advisory committee to Gov. Gavin Newsom.

The state also should limit sentencing enhancements that can add years to underlying prison terms but are imposed with "extreme racial disparities," the committee said. As one example, it said 99% of those given a gang enhancement in Los Angeles County are people of color.

"If all 10 recommendations were adopted, they would impact almost every area of California’s criminal legal system, from driving infractions to life in prison, and probably everybody behind bars would be affected in some way," committee chairman Michael Romano told The Associated Press.

"We can improve public safety and reduce incarceration at the same time," said Romano, who directs the Stanford Three Strikes Project. It previously helped persuade California voters to ease the state’s three-strikes law that was considered the nation’s toughest law aimed at repeat offenders.

The committee made up of current and former lawmakers, judges and academics aimed at having a broad impact with its unanimous proposals, including addressing racial and economic disparities in traffic tickets, where unpaid fines can turn into a mountain of debt and eventually a jail sentence.

Committee members recommended that driving without a license and driving with a suspended license based on a previous failure to pay a fine or appear in court be reduced from misdemeanors to infractions, with reduced fines and fees.

Some of California’s largest counties and state lawmakers already have moved in that direction, with former Gov. Jerry Brown in 2017 ending the suspension of licenses for people who did not pay court fees.

San Mateo County District Attorney Stephen Wagstaffe, who addressed the committee on behalf of the state prosecutors’ association, said some recommendations like the traffic offense reductions would be "a positive step forward." Others, like limiting judges’ discretion on gang enhancements "could be steps in the wrong direction."

Glen Stailey, president of the California Correctional Peace Officers Association, said in a statement the group is concerned "about potential negative impacts on public safety" from some recommendations while California Police Chiefs Association president Eric Nuñez said his organization looks forward to reviewing the report.

The recommendations come in the first report from the California Committee on the Revision of the Penal Code that Newsom swore in little more than a year ago.

But Democrats now hold supermajorities in both Legislative chambers and with the blessing of fellow Democrat Newsom have already passed piecemeal sentencing changes.

The committee deliberately stuck with proposals that Democrats can pass with a simple majority and don’t require voters’ approval.

"We really did try to find areas where there were obvious problems, where almost everybody agreed there was a problem, craft solutions where there was broad consensus also keeping in mind solutions that had a realistic chance of being enacted," Romano said.

They include allowing anyone who has served more than 15 years to request that their sentence be reconsidered if they can show that "continued incarceration is no longer in the interest of justice."

Nearly 30,000 of California’s 114,000 inmates had served more than 15 years in state prison as of last June, according to the report. The committee stopped short of saying the proposal should apply to those on death row or those serving life-without-parole, which would require supermajorities and approval by voters.

Resentencing would be automatic if law enforcement officials recommend it on the grounds that the original sentence was unjust or because they say the person demonstrated "exceptional rehabilitative achievement."

All sentences that would bring less than one year behind bars should be served in county jails rather than state prisons, because research shows offenders tend to do better if they stay closer to home and benefit from more rehabilitation programs, the committee said.

About 14,000 people annually serve less than a year in a state penitentiary and sending them to local jails would be a burden, said Cory Salzillo, spokesman for the California State Sheriffs’ Association.

"Many jails don’t have the capacity to take on more offenders," Salzillo said.

No one should serve more than five years in county jail, the panel said, a change from current law. Lower level thefts should be misdemeanors unless they involved serious injury or use of a weapon, it said.

Committee members reported their review of the criminal code found laws that were "badly outdated" or "incoherent." The state’s robbery law hasn’t been updated since 1872, for instance, while several conflicting provisions govern which inmates should be considered for parole.

The proposal doesn’t seek to do away with the state’s more than 150 different sentence enhancements. But it says judges should consider dismissing them if the offense is nonviolent; related to mental health issues, childhood trauma or prior victimization; or is triggered by an old conviction, particularly if the offender was a juvenile at the time, among other considerations.

Gang enhancements should be limited to organized, violent criminal enterprises, among other restrictions, the committee recommended.

"It is difficult to imagine a statute, especially one that imposes criminal punishments, with a more disparate racial impact," the committee said.