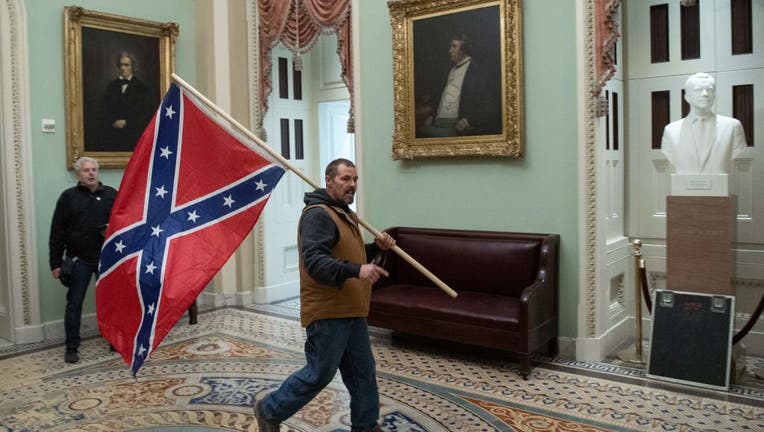 A supporter of President Donald Trump, later identified as Kevin Seefried, carries a Confederate flag as he protests in the US Capitol Rotunda on Jan. 6, 2021, in Washington, D.C. (Photo by SAUL LOEB/AFP via Getty Images)

WASHINGTON - A federal judge's acquittal of a New Mexico man in April was a rare blemish on the Justice Department's record of securing convictions in U.S. Capitol riot cases. More than two months later, a Delaware father and son hope the same judge will clear them, too.

Widely published photographs showed Kevin Seefried carrying a Confederate battle flag inside the Capitol after he entered the building with his son, Hunter. The Seefrieds were "early, aggressive and active participants" in the Capitol breach and among the first rioters to enter the building on Jan. 6, 2021, prosecutors have said.

McFadden, whom President Donald Trump nominated in 2017, has criticized prosecutors' handling of Capitol riot cases. He suggested that the Justice Department has been unjustly tougher on Capitol riot defendants compared with people arrested at protests against police brutality and racial injustice after George Floyd’s 2020 murder by a Minneapolis police officer.

In April, McFadden acquitted New Mexico resident Matthew Martin of misdemeanor charges that he illegally entered the Capitol and engaged in disorderly conduct after he walked into the building.

Martin testified that a police officer waved him into the building. A prosecutor rejected that testimony as "nonsense," but McFadden said it was reasonable for Martin to believe that outnumbered police officers allowed him to enter the Capitol through the Rotunda doors.

In March, McFadden acquitted a New Mexico elected official of engaging in disorderly conduct but convicted him of illegally entering restricted Capitol grounds. The judge said there was ample evidence that Otero County Commissioner Couy Griffin knew he was in a restricted area and didn’t leave. However, McFadden concluded prosecutors didn’t meet their burden to prove that Griffin engaged in disorderly conduct.

McFadden is the only judge to a hold a bench trial for a Capitol riot case so far.

On Tuesday, U.S. District Judge Colleen Kollar-Kotelly is scheduled to preside over a bench trial for Jesus Rivera, a Pensacola, Florida, man charged with four riot-related misdemeanors. President Bill Clinton nominated Kollar-Kotelly to the court in 1997.

At least four other Capitol riot defendants have bench trials scheduled for this year.

Juries have unanimously convicted five Capitol riot defendants of all charges, a perfect record for prosecutors so far. More than 300 others have pleaded guilty to riot offenses, mostly misdemeanors punishable by no more than one year in prison. Approximately 100 others have trial dates in 2022 or 2023. More than 800 people have been charged with federal crimes related to the Jan. 6 attack.

The Seefrieds traveled to Washington from their home in Laurel, Delaware, to hear Trump's speech at the "Stop the Steal" rally on Jan. 6. After the rally, they stopped by their car before joining the mob that stormed the Capitol, prosecutors say.

The Seefrieds climbed over a wall near a stairwell and scaffolding in the northwest section of the Capitol and were among the first rioters to approach the building near the Senate Wing Door, according to prosecutors. After watching other rioters use a police shield and a wood plank to break a window, Hunter Seefried used a gloved fist to clear a shard of glass in one of the broken windowpanes, prosecutors said.

"The defendants and scores of other rioters entered the Capitol building through that window," prosecutors wrote.

The Seefrieds joined other rioters in confronting Capitol police officer Eugene Goodman and in looking for members of Congress and the location where they would be counting the Electoral College votes for the 2020 presidential election, according to prosecutors.

Goodman, who is expected to testify at the Seefrieds' trial, has been hailed as a hero for leading a group of rioters away from Senate chamber and up a set of stairs to an area where other officers were waiting. Goodman also directed Sen. Mitt Romney, R-Utah, to turn around and head away from the mob.

Kevin Seefried told the FBI that he threatened Goodman with violence, saying: "And then I threw my stick down. I said, ‘You can shoot me, man, but we’re comin’ in,’" according to prosecutors.

Kevin Seefried carried a Confederate battle flag from home and was photographed displaying it on a large flagpole as he walked through the Capitol.

"Indeed, the flag that Kevin Seefried carried itself served to signal his intent: the Confederate Battle Flag, a symbol of violent opposition to the United States government," prosecutors wrote.

The charges against both Kevin and Hunter Seefried include a felony count of obstruction of an official proceeding, the joint session of Congress for certifying President Joe Biden's electoral victory.

Hunter Seefried told the FBI that he went to Washington because he was concerned about "fraud" tied to the election, prosecutors said.