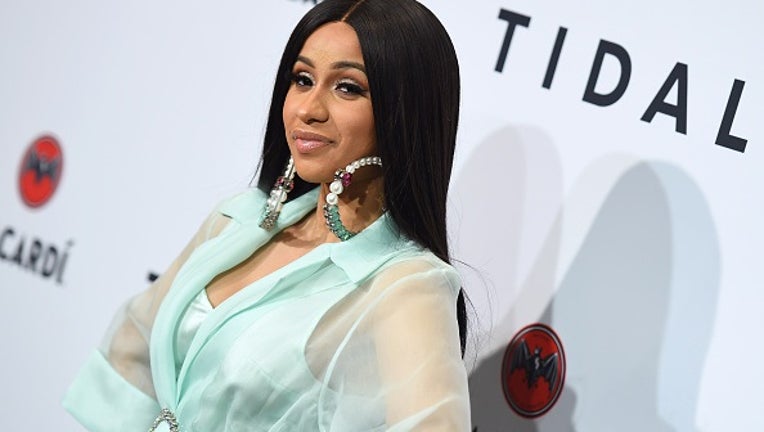 ATLANTA -  A federal jury in Atlanta has awarded $1.25 million to Cardi B in a defamation lawsuit against a celebrity news blogger who she says posted videos falsely stating the Grammy-winning rapper used cocaine, had contracted herpes and engaged in prostitution.

The jury on Monday found Latasha Kebe, known online as Tasha K, and a company she owns liable for defamation, invasion of privacy and intentional infliction of emotional distress against the rapper, whose given name is Belcalis Almanzar. Kebe’s lawyers said in an email Tuesday that they disagree with the verdict and will file an appeal.

The jury awarded Cardi B $1 million in general damages for pain and suffering and/or reputational injury and $250,000 in medical expenses.

Kebe, who lives in the Atlanta area, produces, hosts and publishes a YouTube channel called unWinewithTashaK.

Kebe began targeting Cardi B in early 2018, making "degrading and harassing statements" about her, the lawsuit says. On Sept. 19, 2018 Kebe published a video of an interview she did with a woman who said she’d known Cardi B before her music career. The video includes the "false, malicious and defamatory" statements that Cardi B was a prostitute, has herpes and had suffered outbreaks on her mouth, and used cocaine.

"None of the aforementioned statements about Plaintiff are true," the lawsuit says. "Plaintiff was never a prostitute or a user of cocaine. Plaintiff has never, and does not now, have herpes, nor has she had herpes outbreaks on her mouth."

Shortly after the video was published, Cardi B’s lawyer sent a cease and desist letter to Kebe demanding its immediate removal. Instead, Kebe published another video on Sept. 21, 2018, claiming that everything said in the video two days earlier was accurate and also asserting that the rapper was cheating on her husband, the lawsuit says.

Kebe then proceeded to attack Cardi B and make false statements about her on social media for months, the lawsuit says.

The statements caused Cardi B to "suffer embarrassment, humiliation, mental anguish, and emotional distress," the lawsuit says. They also "caused damage to (Cardi B’s) reputation and character within her profession and industry, including but not limited to among her fans and with prospective business relations."

Kebe knew the statements she published about Cardi B were false, or was aware they were likely false, when she published them, the lawsuit says.

Cardi B originally filed the lawsuit against Kebe in March 2019. The woman Kebe had interviewed in the September 2018 video was initially a defendant as well, but the claim against her was terminated on Nov. 11, 2020, according to a filing by the judge in the case.

Kebe said in a court filing responding to the lawsuit that after she published the Sept. 19, 2018, video, Cardi B reached out to her via private message about the interview and was angry because personal details about her had been released. Kebe told Cardi B she wasn’t interested in talking via private message and encouraged her to come on her YouTube channel to "tell her truth" in an interview, the filing says.

Cardi B declined and instead "went on a rampage" on Instagram, publishing numerous videos about information in the video and "began to publicly trash" Kebe, saying she "always makes up fake stories; harasses all of Cardi B’s friends; constantly stalks Cardi B; uses Cardi B’s name for ‘click bait’; and many similar accusations," Kebe’s court filing says.

Kebe received threats on Instagram and harassing calls on her cellphone, and her home address was made public, her court filing says. She feared for the safety of herself and her family and reached out to the FBI’s Atlanta office. After an FBI agent advised her it would be best to find a new place to live, she moved her family to a different city in another county and ended up having to change her phone number, her filing says.

Kebe filed counterclaims against Cardi B, saying the rapper encouraged her associates and fans to threaten and harass her. Cardi B and her associates engaged in a "pattern of intimidation and harassment" against her when they threatened physical violence against her, the court filing says. In addition to the fear and anxiety Kebe suffered while also dealing with a high-risk pregnancy, she also incurred unexpected expenses associated with her abrupt move, her filing says.

Kebe said the rapper was guilty of assault and intentional infliction of emotional distress and should be required to pay her damages and attorney fees. U.S. District Judge William Ray in July dismissed Kebe’s claims, saying she had failed to provide evidence establishing that Cardi B was the actual cause of any alleged assault or emotional distress.