From Academy Award-nominated movies to films from Asian American directors to titles that prominently feature AAPI stories, there are many so options to choose from.

A Thousand Years of Good Prayers (2007) - Directed by Wayne Wang (Joy Luck Club)
"A woman moves from China to America to start over, When her father visits, they clash, exposing lies and family secrets from the Cultural Revolution."

Bitter Melon (2018) - Directed by HP Mendoza
"A Filipino-American family in San Francisco abused by an older brother get caught up in the youngest brother’s plan to murder him at Christmas."

Children of Invention (2010) - Sundance Film Festival selection
"Two young children living outside Boston are left to fend for themselves when their mother gets embroiled in a pyramid scheme and disappears."

Chu and Blossom (2015) - Featured in the Los Angeles Asian Pacific Film Festival
"A coming of age comedy centers on an unlikely brotherhood between a pensive, awkwardly tall Korean foreign exchange student and a militant performance artist, both trapped together in a small town." 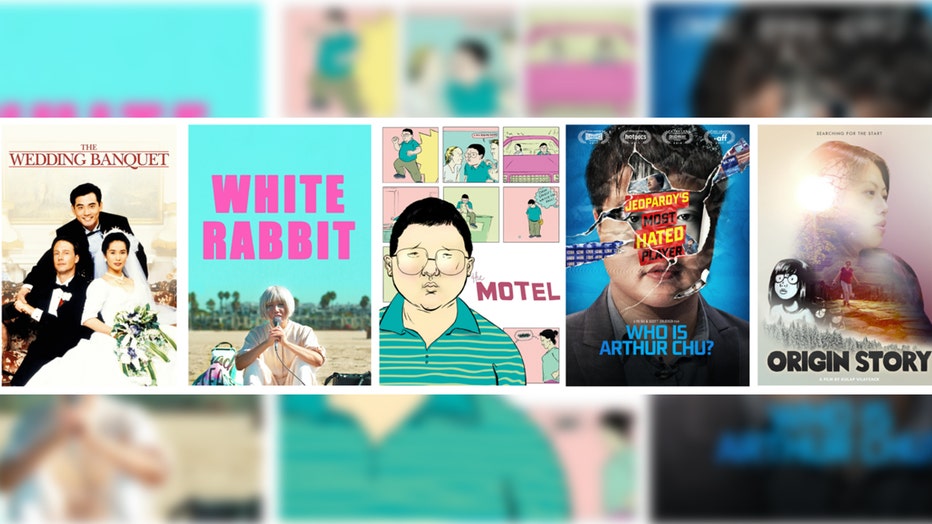 Go Back to China (2019) - Starring comedian Anna Akana, written/directed by Emily Ting
"After a spoiled rich girl blows through her trust fund, she is cut off by her father and forced to work for the family toy business."

I Will Make You Mine (2020) - Directed/written/produced by Lynn Chen, produced by Emily Ting
"Three women with various struggles in life, from fading dreams to infidelity at home, all share a complex romantic history with the same singer."

Love Arcadia (2014) - Featured in the Los Angeles Asian Pacific Film Festival
"When a greedy estate developer sets her sights on his family’s bubble tea shop, a once-carefree teen finds himself on the front lines to defend it."

Miss India America (2015) - Featured in the Los Angeles Asian Pacific Film Festival
"Ambitious Lily has only ever wanted to win, but when her boyfriend breaks up with her to date a beauty queen, she decides to enter Miss India America."

Ping Pong Playa (2007) - Directed by Jessica Yu
"A Chinese-American, gangster-rapping, basketball star wannabe has to change gears and save the family business in a kids’ ping pong tournament."

The Motel (2005) - Won Humanitas Prize in Sundance Film Festival; nominated for an Independent Spirit Award for Best First Feature
"Puberty sucks, and nobody knows it better than 13-year-old Ernest. As he watches guests come and go, Ernest finds himself forever stuck at his family's hourly-rate motel. He is forced to divide his time between taking orders from his overbearing mom, cleaning up after the miscreant quests staying at the motel, and longing for the girl of his dreams, 15-year-old Christine."

Today’s Special (2009) - Written by Aasif Mandvi (correspondent/comedian on The Daily Show)
"In this comedy, a chef at an upscale, Manhattan restaurant returns to the kitchen of his childhood to rescue the bankrupt family restaurant."

White Rabbit (2018) - Featured in the Los Angeles Asian Pacific Film Festival; Sundance Film Festival
"A bullied high school student starts having visions of a rabbit that he killed when he was a kid, soon putting him in a state where his imagination threatens to cause him to carry out violent acts."

A Bitter Legacy (2016) - Starring Tetsuden Kashima, Roger Daniels and Arthur Hansen
"A look into internment of Japanese-Americans before, during, and after WWII."

Mulberry Child (2011) - Starring Jian Ping, Lisa Xia and Jacqueline Bisset
"A trip to the 2008 Beijing Olympics opens a woman’s eyes to her mother’s childhood growing up during China’s Cultural Revolution."

Who is Arthur Chu? (2017) - Starring Scott J. Drucker and Yu Gu
"A documentary that follows "Jeopardy!" champ Arthur Chu as he battles dark forces on the Internet and attempts to create positive change."