Teen killed, others hurt after I-40 school bus crash in eastern Arizona while on a field trip

SANDERS, Ariz. - A teen is dead and several others were injured after their school bus was rear-ended by a semi-truck on Interstate 40 in eastern Arizona on Sunday, Aug. 28 while on a field trip.

The collision happened just before 9:30 a.m. on I-40 near milepost 328 near Sanders, according to the Arizona Dept. of Public Safety.

Officials said that eastbound traffic had been slowing because of an earlier rollover crash that morning. The school bus was rear-ended by a semi as a result of the slowdown, pushing the bus into a van.

Nineteen people were inside the bus at the time. One of the occupants, described as a juvenile, died.

Six other people in the bus were seriously injured, and no information was released about their names or ages.

It is not known whether the drivers of the semi and the van were hurt.

The Holbrook Indian School released a statement on the crash, saying staff and students were on a trip when the crash happened.

"This is a very sad day for the Holbrook Indian School community; one of our students died, and six others were injured in a school bus accident this morning.  According to the Arizona Department of Public Safety, our school bus slowed down in traffic near another crash when the bus was struck from behind by a semi-truck. Our bus was pushed into the vehicle in front of it.  The bus was transporting a group of staff and students on a field trip to Window Rock, New Mexico. Our concerns now are for our parents and families as we uphold and grieve with them.  We ask that you would be patient and respectful as we work through this as a school community, and we solicit your prayers on behalf of everyone impacted by this tragedy," the statement read.

I-40 bus crash photos that killed a teenager and injured several others in Sanders, Arizona on Aug. 28. Photo courtesy of Melissa

'She had a beautiful soul' 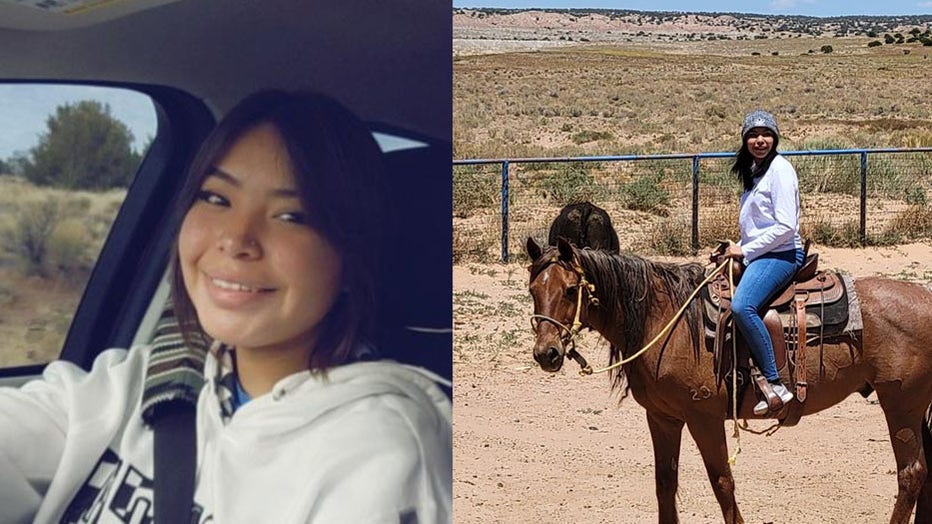 The victim's aunt, Falonna Ashley, identified her niece, Kiarra Alma Gordon, as the teenager who died in this crash.

She says Gordon had just turned 17 in July and has three younger brothers. She loved sports, movies, and helping with animals on the ranch.

"She had a beautiful soul. She's from Wide Ruins, a small community on the Navajo Nation. She was focused on education and was thinking about what to do after high school," Ashley said.

Volleyball was her favorite sport.