FLAGSTAFF, Ariz. - Even before the fire was out, people who live in Flagstaff knew they faced another danger. Not necessarily from the Museum Fire itself, but from the devastating flooding that could result from the combination of our monsoon and a watershed badly charred.

The Museum Fire started last July in steep terrain north of Flagstaff. By the time it was done, nearly 2,000 acres of Ponderosa pine had gone up in smoke. Today, all that blackened forest covers part of the Flagstaff watershed, and flash flooding is now the concern. Flooding like the kind that killed a 12-year-old girl and destroyed 85 homes after the Shultz Fire in 2010.

"The major concern for this fire is the potential post-fire flooding for the city of Flagstaff," said Dick Fleishman with the Coconino National Forest. "That was major flooding [in 2010] and the loss of life, $1 million worth of infrastructure, damage, and repair. One of our objectives was to keep this fire as small as possible because of that potential to post-fire flooding."

Fleishman was on the scene while the Museum Fire burned and he's still there doing whatever can be done.

"The first thing we did when the fire was still active is we installed rain gauges within this fire area to be able to track when we get those storms," Fleishman said. "And so we can understand when we have the potential for flooding."

As seen from our SkyFOX drone for the first time, the fire doesn't seem that devastating from the air. But a lot of these trees are burned from the inside out, and will soon be on the ground.

"Trees that have actually burnt in the middle, they aren't smoking, they aren't doing anything right now," Fleishman said. "Basically, they're just a shell waiting to fall."

And the ground is covered with burned, hardened soil that won't soak up water like it's supposed to. But so far, a record dry monsoon has helped.

"If we get one of those 15-minute short duration, high intensity, there will be water running like crazy," Fleishman said.

Christopher Tressler is an engineer with Coconino County.

"We know the watershed upstream of the residential area has been compromised by the fire," Tressler said. "We have deployed more than half-a-million sandbags."

Sandbags are piled up by the thousands in front of Flagstaff homes and businesses. Even a school, where barriers and sandbags surround the playground. Many are placed strategically to force floodwaters into man-made canals. Our drone flew down one of them to get a better look. Even with clouds looming nearby, lack of monsoon rain has given Coconino County and the city of Flagstaff time to prepare.

"This will definitely help us pass a significant amount of water through a residential area and decrease the impact to the homes that are in the area," Tressler said.

If a catastrophic flood heads through this part of Flagstaff, the city says it's prepared.

"We are on standby," said Flagstaff Mayor Coral Evans. "There are hotlines [and] the alerts that we are getting, so we're ready."

Mayor Evans says all the prep work has comforted people in the path of a potential flood. Most people have signed up for an alert system - messages sent to cellular phones that should give people a list a five-minute warning.

"Before the fire was even out, we were already planning, preparing, and implementing these post-fire flood mitigation measures," said Flagstaff Public Works Director Andy Bertelsen.

In the meantime, this part of the national forest remains closed while the forest service will do what it can to shore up the ground destroyed by fire.

"Left unchecked, these will become gullys," Fleishman said. "Anytime you get a gully, it transports water more efficiently, so you get a lot more water down the hillside, so that's the things we [are] trying to mitigate."

Nature is helping. Trees are already losing needles, which soften the ground and mulch will be dropped on the steepest slopes.

"[We're] chipping up logs and dropping those chips on the steep slopes to try to put some surface roughness up there," Fleishman said.

Dead trees marked by blue paint will be removed before they hurt someone. They will make for new growth already popping up, but it will take time for the rest of the forest to recover.

"When they fall, they fall silently so you hear the crack [before] it's too late," Fleishman said. "[It will take] up to 100 years, so it's going to take a while."

It will take more time if the monsoon releases devastating floodwaters toward Flagstaff.

"We've been lucky with the monsoon so far," Fleishman said.

"Hopefully we can keep that luck back up," Tressler said.

There have been some monsoon rains in the affected area, but so far, not the kind of rain that would trigger the worst kind of devastating flood.

Now, all anyone can do is hope for the best. 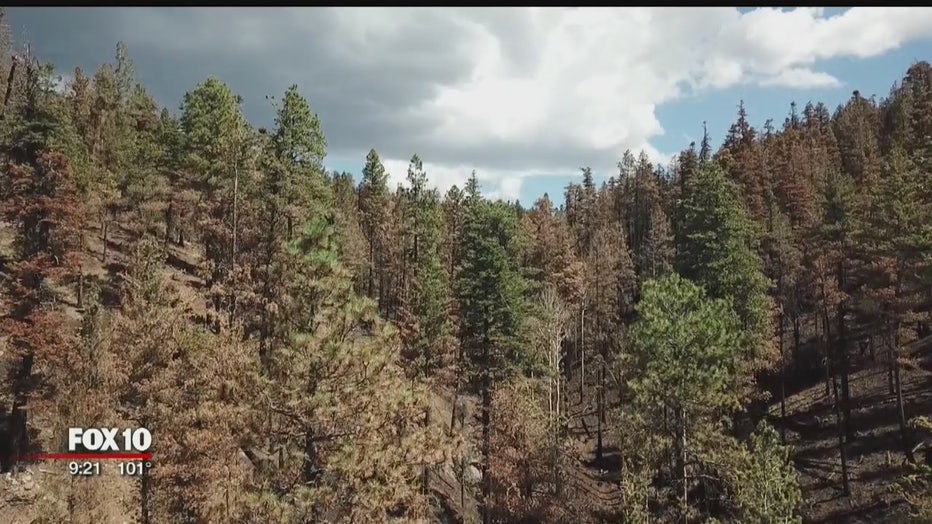