KITCHENER, Ontario - A Canadian man who worked as a dental hygienist said his license was revoked for five years and he was labeled a “sexual abuser” after cleaning the teeth of a client — who is his wife.

Alexandru Tanase, who has been working in dentistry for nearly two decades, said his wife suffers from dental fear and anxiety “like so many other clients,” and he cleaned her teeth on several occasions between April 2015 and August 2016.

In the Canadian province of Ontario, it’s considered professional misconduct if a dental hygienist “has sexually abused a client,” according to the Regulated Health Professionals Act. This can include sexual intercourse or other types of physical sexual relations with a patient. This also includes a spouse.

“The definition of sexual abuse includes the treatment of spouses even if there was a pre-existing spousal relationship prior to dental hygiene treatment being performed,” guidelines posted on the College of Dental Hygienists of Ontario website state. “It is important to note that a client’s consent to treatment in these cases is irrelevant; it still amounts to sexual abuse as defined in the legislation.”

Currently, the only health care providers in Ontario who are exempt from the law and are allowed to treat their husbands or wives are dentists.

Tanase said he was finally stripped of his license on Sept. 9 by the College of Dental Hygienists of Ontario after fighting the issue for several years. 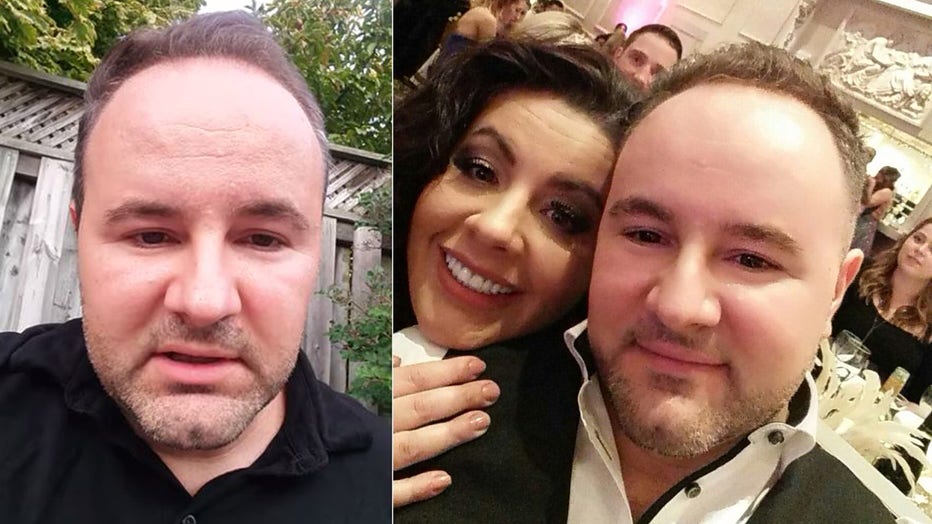 Alexandru Tanase is pictured in a YouTube video he posted about the case, alongside a photo of him and his wife. (Photo credit: Provided / Alexandru Tanase)

Tanase said that in 2015, the CDHO proposed an amendment to the act that, if approved, would have allowed dental hygienists to provide dental care to their spouses. Tanase said that after the proposal was submitted, a colleague erroneously informed him and other coworkers that the spousal exemption had been approved — when in fact it had not.

“I believed her without question,” he wrote in a statement on Facebook about the case. “Unfortunately, I should have double-checked the great news but instead booked my wife for a cleaning.”

A complaint was later filed in the summer of 2016 with the CDHO by a former friend and Facebook acquaintance of Tanase’s wife, who saw a photo she posted of the two at the office saying how happy she was with her dentist, according to Tanase.

Tanase said an investigator showed up at this workplace in Nov. 2016 to look into the complaint. Tanase said he later appeared before the discipline committee in April 2018 and was found guilty of sexual abuse under the Regulated Health Professionals Act. His license was also revoked for five years, which is the mandatory penalty for sexual abuse of a client.

“I cannot begin to explain the destruction this defamation of my character and licence revocation have caused to my life, marriage, finances, and reputation,” he wrote on Facebook. “It makes no sense, in 2019, that dental hygienists in Ontario are not allowed to clean their spouses’ teeth, especially when dentists can provide dental care to their spouses.”

Tanase said the proposed spousal exemption for dental hygienists is still pending. He’s now fighting for the CDHO to reinstate his licence, as well as the licenses of two fellow colleagues, along with the passage of the proposed exemption.

Tanase claims the law is discriminating to not only he and his wife, but to “over 14,000 dental hygienists and their spouses” and says the law is “deliberately blocking access to health care.”

“My wife, as a patient, does not feel protected,” Tanase said. “She feels destroyed and at fault for all that has happened.”

Tanase said the consequences of the law have led to stress, medical issues and a financial burden of more than $70,000 of fees in fighting the case.

“There will be an online public record stating that I lost my licence due to my contravention of the ‘sexual abuse’ provision within the legislation, even though it was agreed that there was no sexual abuse of my wife. It doesn’t seem to matter since I’m going to be labeled and judged like a sexual abuser anyway,” he wrote. “My name is attached to this for life. Not to mention having my licence taken for 5 years which has caused me to lose my job and risk of losing my home.”

In addition to sharing his story in a YouTube video, Tanase started a GoFundMe to help pay for legal fees and an online petition regarding the proposed exemption.

“How many real sexual abusers, rapists, murderers, and other criminals get away with the crime committed and/or receive a lesser fine that really is inappropriate given the gravity of their crime,” he wrote on Facebook. “God forbid that a dental hygienist in Ontario make a simple mistake, which I have admitted to and begged for forgiveness repeatedly in my statements.”

The Canadian Dental Hygienists Association has offered support to Tanase in the case, sharing his story on social media and writing to the Ontario government, according to Canada’s Global News.

According to Ondina Love, CEO of CDHA, the only provinces in Canada that have similar legislation regarding providing dental hygiene care to spouses are Ontario and New Brunswick.

“There are no regulations in the rest of the country,” she told the network.