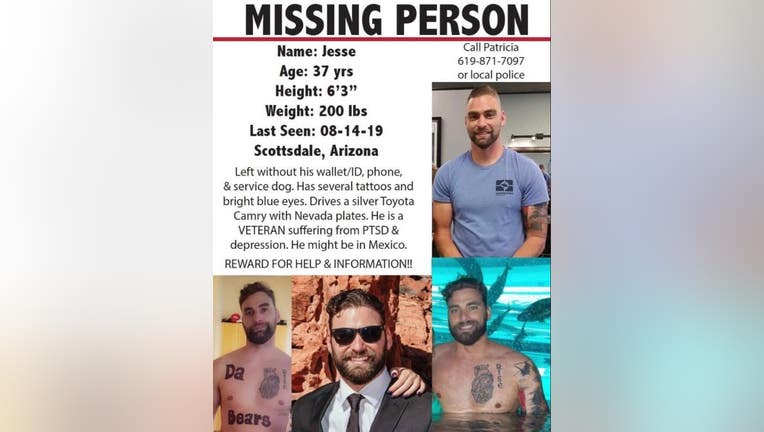 SCOTTSDALE, Ariz. (FOX 10) - A millionaire and philanthropist from Detroit, Michigan is offering a $30,000 reward to the person who finds a missing combat veteran from Scottsdale.

Scottsdale police say Jesse Conger was last seen August 14 at his Scottsdale apartment. He is described as a 37-year-old white man, 6'2", 200 pounds, with brown hair, a full beard, and blue eyes. He has tattoos on his left arm and the word "rise" tattooed on his chest.

Conger is a veteran who is suffering from post-traumatic stress disorder and depression, according to family. Police said he reportedly made suicidal statements in the days leading up to his disappearance.

Bill Pulte, the Chief Executive Officer of Pulte Capital and Blight Authority, has offered to help in the search and has increased his reward to $30,000 to whoever helps find Conger.

Pulte calls himself the inventor of Twitter philanthropy. We spoke to the founder of Code of Vets, Gretchen Smith, who reached out to the philanthropist as the family of this missing vet hopes for the best.

"The family is panicking, they want to know where he's at," Smith said. "This is out of character for him, so they're literally out in the woods, searching for their son, their brother, their cousin, their friend."

Code of Vets is a non-profit organization committed to taking care of veterans. Through her work, Smith has built a Twitter following of nearly 180,000. She wants to shine a light on the issue of missing vets battling PTSD. Smith says she reached out to Pulte about Conger. He didn't hesitate to help, initially offering $10,000 to anyone who finds him.

"We feel like this is a true emergency," Smith said. "We have to take action and [Pulte] wants to be a part of the veteran community in doing what he can to decrease that number that we dave daily that's committing suicide."

Conger may be driving a 2015 Toyota Camry with Nevada license plate number 696G03 and is believed to possibly be in Mexico.  Smith says there are many families of veterans with PTSD who just need to reach out before it's too late.

"When your veterans go missing, when they are in those dark places, this is what you can do," Smith said. "This is how you can assist them - they are not aware of what their options are."

If anyone has any information regarding the whereabouts of Jesse Conger, please call Scottsdale police.