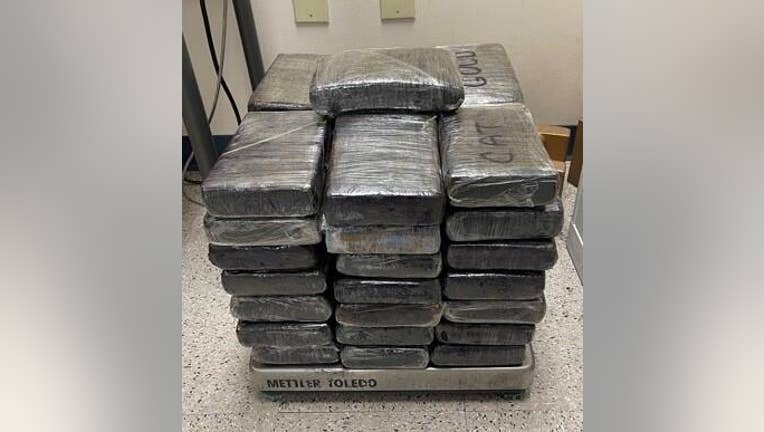 The drugs were estimated to have a street value of $1.6 million.

LAREDO, Texas - U.S. Customs and Border Protection said officers seized more than $1.6 million worth of narcotics in two days at a border crossing in Texas.

The narcotics were seized at the World Trade Bridge in Laredo, Texas, which is about 150 miles south of San Antonio. The drugs were found in three separate, unrelated incidents.

The first was on Jan. 26 when officers found the alleged drugs in a shipment of toilet paper from Mexico. Officers found 43 packages containing nearly 114 lbs. of alleged cocaine in a trailer, estimated to have a street value of $878,000.

The second was later that evening when officers found the alleged drugs in a shipment of vinyl samples from Mexico. One package contained nearly 18 lbs. of alleged methamphetamine, estimated with a street value of $357,000.

The third happened on Jan. 27 when officers found the alleged drugs in a shipment of kitchen cabinets coming from Mexico. Twenty packages containing more than 51 lbs. of alleged cocaine were found, estimate with a street value of more than $397,000.

The three narcotics seizures combined have an estimated street value of $1.6 million.

"As these three seizures illustrate, our frontline officers at World Trade Bridge continue to maintain their vigilance, supporting the CBP mission by disrupting the flow of illegal narcotics entering our borders," Acting Port Director Eugene Crawford, Laredo Port of Entry, said in a news release.