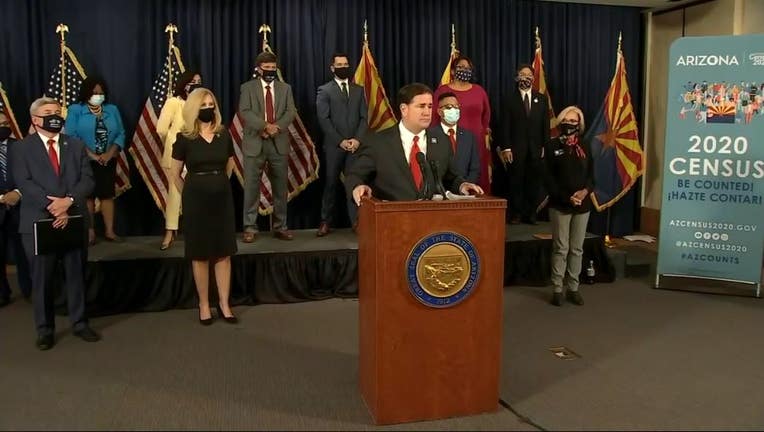 PHOENIX - Gov. Doug Ducey and the head of the U.S. Census Bureau encouraged Arizonans on Sept. 17 to complete their census forms as statistics showed more than 10% of the state's residents haven't yet participated in the once-a-decade national count.

With just 13 days remaining before the count ends, Arizona could lose as much as $500 million a year in federal Medicaid payments alone if those numbers don't improve, according to a new study. More than 40 states have better participation, Census Bureau statistics show, meaning they will get more in per-person federal payments.

Ducey and Census Bureau Director Steven Dillingham said at a news conference that more than 400 additional census workers have been brought in since last week to help locate people who haven't completed their census forms.

“We have every intention of exceeding 90%, of capturing every dollar and counting every Arizonan, and that’s why Director Dillingham is here today,” Ducey said “That’s why we’re having the press conference.”

A group of cities, counties and civil rights groups are suing to get the census completion deadline extended by a month to the end of October as was previously planned. They're urging a federal judge to act because the pandemic, fires on the West Coast and hurricanes on the Gulf Coast have hurt outreach and completion efforts.

Government attorneys have argued that the census must finish by the end of September to meet a Dec. 31 deadline for turning over numbers used for deciding how many congressional seats each state gets in a process known as apportionment.

Besides determining how many congressional seats each state gets, the census helps determine the distribution of $1.5 trillion in federal spending annually.

There's also action in Congress, as a bipartisan group of lawmakers introduced a bill to extend the head count through October and push back the deadline for turning over apportionment numbers from the end of December to the end of next April.

A study released by the American Statistical Association Thursday showed ending the 2020 census at the end of September instead of the end of October, could cost Florida and Montana congressional seats. It could also result in Texas, Florida, Arizona, Georgia, and North Carolina losing $500 million annually in federal funding for health care for its neediest residents.

The Census Bureau has counted 89.9% of Arizona residents, Dillingham said, although some areas such as the Navajo Nation and largely Latino areas of metro Phoenix have much lower participation. He said the agency is working to ensure that Arizona as well as areas hit by wildfires and hurricanes get as complete a count as possible

“It is a challenge," Dillingham said. “We’re trying to make sure we meet that challenge and we're making tremendous progress.”

He also said the Bureau will adjust to whatever court or congressional changes occur.

The Census Bureau sent out millions of letters to Arizonans asking them to fill out forms online, in writing or by phone. They are following up with in-person contacts at homes where they did not get a response.

Residents who have not responded to the census can do so by phone, online or by returning the form mailed to their home.

Twitter has rolled out a new tool to help users find accurate information about this year's U.S. Census.