Concerns are soaring over Russia's conflict with Ukraine, including fears of a full-fledged invasion.

WASHINGTON - When Russian President Vladimir Putin authorized troops to cross Ukraine's border into regions controlled by Russian-backed separatists, the White House initially stopped short of calling it an invasion. That changed on Tuesday, and key allies in Europe joined in saying Putin had crossed a red line.

"This is the beginning of a Russian invasion of Ukraine," President Joe Biden said.

"We saw last night that further Russian troops moved into the Donbas into parts of Donetsk and Luhansk, " he said Tuesday, referring to the two areas of Ukraine's eastern Donbas region controlled by Russian-backed separatists. "What we see now is that a country that is already invaded is suffering further invasion."

But not all invasions are viewed as equal.

Asked whether Putin's decision to send in what he called "peacekeepers" amounts to an invasion, the European Union's foreign policy chief, Josep Borrell, said, "I wouldn’t say that’s a fully-fledged invasion, but Russian troops are on Ukrainian soil."

Use of the term "invasion" is important in this case because it sets the stage for what Biden said could become multiple waves of economic sanctions, in coordination with NATO allies and other countries who view Putin's aggression as a violation of international law and a threat to order in Europe.

Sanctions are the West's main tool for pushing back because they have ruled out taking on Russia militarily.

Russia-Ukraine: New details from the ground as 'invasion' underway

Russia's actions in the last 24 hours have signaled the "beginning of an invasion" President Joe Biden said, as UN and U.S. officials await to see what President Vladimir Putin does next. LiveNOW speaks with Fox's Lucas Tomlinson from inside Ukraine as we learn the latest developments from the ground.

What's happening on the ground in Ukraine?

The picture is ominous and not entirely clear.

Putin on Monday said Russia recognized the rebel regions’ independence "in borders that existed when they proclaimed" their independence in 2014. That constitutes territory held by the Ukrainian army. Putin also issued a decree authorizing the use of what he termed peacekeepers in that region, although Russian officials had not confirmed that troops had crossed the border in response to the decree.

Separately, Russian lawmakers granted Putin permission to use the military abroad, suggesting an intention to further invade Ukraine and potentially launch a long-feared operation to topple the Kyiv government. 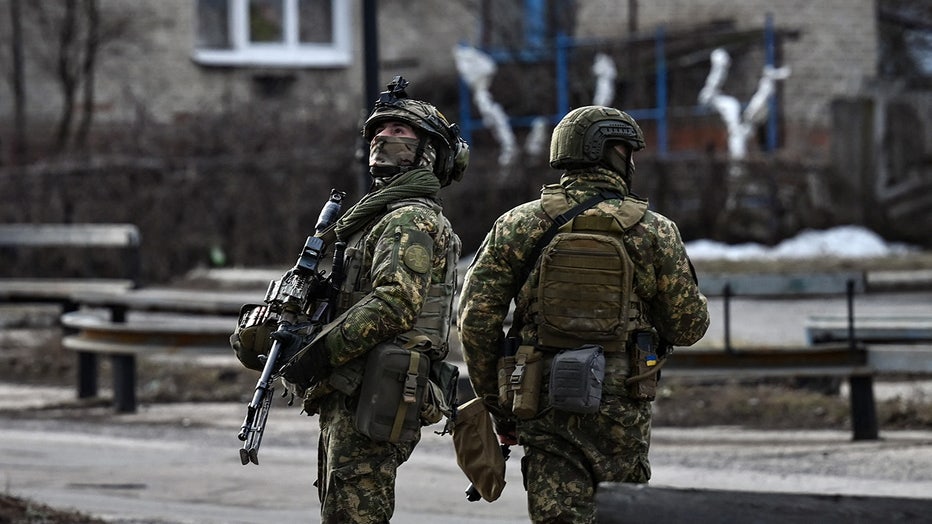 Ukrainian troops patrol in the town of Novoluhanske, eastern Ukraine, on February 19, 2022. (Photo by ARIS MESSINIS/AFP via Getty Images)

Is this an invasion?

It's difficult to see this as anything other than an invasion, although people can argue over terminology. The disagreements would fade if, as many expect, Putin launches a full-scale offensive to topple Kyiv.

Biden said it defies logic to think Putin has taken such extensive military preparations, including putting more than 150,00 troops on the border and moving blood supplies to those areas, for reasons other than invading his neighbor.

"You don't need blood unless you plan on starting a war," Biden said.

Mary Ellen O’Connell, a Notre Dame law professor and an expert on international law and the use of force, says any crossing of a national border with military forces is unlawful, even if it’s called something other than an invasion.

"A lawful response is gauged by the scale and effects of the incursion," she said. "Using force to take control of an entire country, displacing a government and military forces loyal to it is the most extreme form of violation."

President Joe Biden says Russian President Vladimir Putin's actions in the last 24 hours has signaled the "beginning of an invasion" and announced the first round of sanctions against Russia in response. Implementing full blocking sanctions will not allow Russia to trade with European markets and the Nord Stream 2 pipeline will not move forward, Biden said. The president added that Russia will pay an even steeper price if this continues and the U.S. has no intention of fighting Russia.

What was Washington's initial response?

After Putin outlined his rationale Monday for recognizing the independence of the Donetsk and Luhansk areas, a White House official tip-toed around the question of whether Putin's action constituted a military invasion.

The official said Russian troops had been operating in the rebel-held areas for eight years without admitting it.

"Now Russia looks like it's going to be operating openly in that region, and we are going to be responding accordingly," the official said.

What will the U.S. do next?

After stating publicly that Russia has again invaded Ukraine, the question is how far Biden will go in responding. He has made clear that he would not send U.S. troops into Ukraine, but on Tuesday said he has ordered a shifting of Europe-based U.S. troops to three NATO members who feel most vulnerable to potential Russian attack: Estonia, Latvia and Lithuania. Those three Baltic states were annexed by Moscow following World War II and regained their independence after the collapse of the Soviet Union in 1991.

Biden announced heavy financial sanctions against Russian banks and oligarchs and said more would be imposed if Putin extends his invasion.

Global reaction against Putin's moves in Ukraine has been swift, with little argument about the legality.

"Moscow has now moved from covert attempts to destabilize Ukraine to overt military action," Stoltenberg told reporters Tuesday. "This is a serious escalation by Russia, and a flagrant violation of international law."

Putin has given no indication he intends to start a war on NATO territory, but the allied nations still worry. That is why the Biden administration sent 4,700 additional troops to Poland this month and set up a more robust military headquarters staff in Germany, while also shifting 1,000 troops from Germany to Romania.

Stoltenberg said that NATO allies have more than 100 jet planes on high alert and more than 120 warships ready at sea from the Arctic Circle to the Mediterranean Sea.

"Every indication is that Russia continues to plan for a full-scale attack on Ukraine," Stoltenberg said.