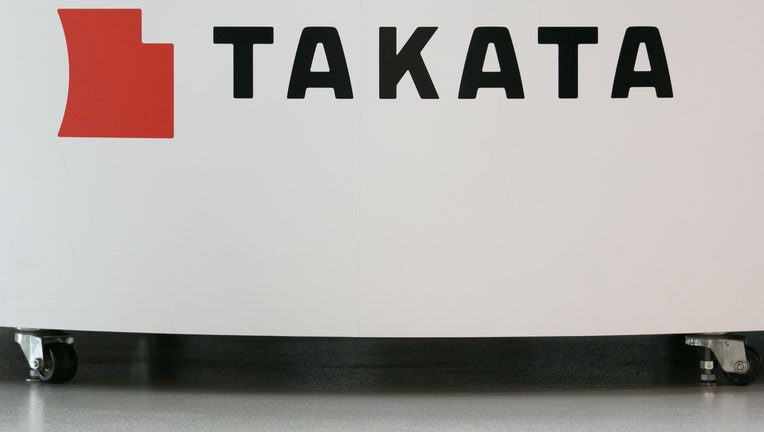 A Takata Corp. logo is seen on display at a car showroom in Tokyo, Japan. (File photo by Christopher Jue/Getty Images)

DETROIT - U.S. investigators have determined that shrapnel from an exploding Takata air bag killed a BMW driver during a crash in Arizona. The September death of the unidentified male is the 18th in the U.S. since 2009 and 27th worldwide caused by the faulty inflators.

The National Highway Traffic Safety Administration wouldn't release further details on the death, citing privacy concerns. But the agency said the incident underscores the importance of getting recall repairs done.

In a statement, BMW said the man in the crash was driving a 2004 3 Series BMW. The company said it has been working to identify and contact owners of older BMWs with recalled Takata air bags.

“We urge all owners to take the recall notices seriously and to have the recalls completed at any authorized BMW Center, as soon as possible,” the statement said.

Takata used volatile ammonium nitrate to create a small explosion to inflate air bags in a crash. But the chemical can become more volatile over time when exposed to moisture in the air. The explosion can blow apart a metal canister and hurl shrapnel into the passenger compartment.

The problem caused the largest series of auto recalls in U.S. history, with at least 63 million inflators recalled. The U.S. government says that as of September, more than 11.1 million had not been fixed. About 100 million inflators have been recalled worldwide.

Most of the deaths have been in the U.S., but they also have occurred in Australia and Malaysia.

Drivers can check to see if their vehicles have been recalled by going to https://www.nhtsa.gov/recalls and keying in their 17-digit vehicle identification number.

The recalls drove Japan's Takata into bankruptcy and brought criminal charges against the company. Eventually it was purchased by a Chinese-owned auto parts supplier.

Under the agreement, roughly $1.7 million will go toward consumer restitution in Arizona. Another $2.1 million will pay for a gift card program incentivizing owners to get their air bags replaced.

A driver died in a crash in Mesa after the inflators in the driver’s side air bag and the passenger air bag had ruptured, Honda officials said Oct. 3.