PHOENIX - The Federal Bureau of Investigation's Phoenix Field Office announced that Robert William Fisher is being removed from the FBI's Ten Most Wanted Fugitives List.

Fisher is wanted for the murder of his wife and two children in Scottsdale on April 10, 2001. On that day, Fisher's wife, Mary Fisher, and their two children, 13-year-old Britney and 10-year-old Bobby, were inside a home that exploded. Fisher disappeared shortly after the crime. Police officials say all three were murdered by Fisher.

He was added to the TMWFL on June 29, 2002 and the FBI says although Fisher remains at large, he no longer fits established criteria for continued inclusion on the list.

"One of the criteria for placement on the TMWFL is the need for publicity to help locate and capture the subject. Because the extensive publicity Fisher’s case received during its nearly 20 years on the list has not resulted in his successful location and/or capture, the case no longer fulfills that requirement."

The FBI added, "is the continued danger a fugitive presents to the community if not apprehended. There is no evidence that Fisher has engaged in any additional illegal activity since his originally alleged crime." 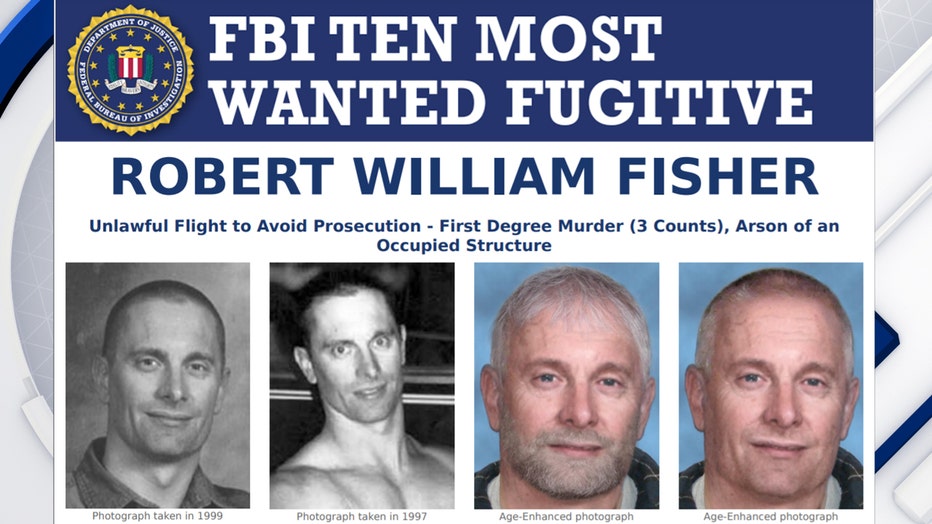 Background on the Fisher case

Robert Fisher is on the FBI most wanted list. Authorities believe he is responsible for the deaths of his wife and two children. FOX 10's Linda Williams reports.

Authorities found the bodies of Mary Fisher, 38, and the couple's children, Robert Jr., 10, and Brittney, 13, in their beds amid debris in April 2001. All three had their throats slashed, while Mary Fisher also had suffered a gunshot wound to the head.

Based on interviews with friends and family, investigators believe Mary Fisher was making plans to leave her husband. But Fisher, a child of divorce, killed the family rather than allow a split to happen.

Investigators determined the explosion was arson and triggered by the disconnection of a natural gas line.

Fisher, who was 40 years old at the time, was seen the night before. Police said the family attended a hunting safety class while he shopped for camping-related supplies at nearby stores.

Less than two weeks later, authorities found Fisher's abandoned SUV and his dog about 90 miles northeast of Phoenix near the town of Young. Believing Fisher was possibly hiding out in a series of caves, more than 100 officers conducted a manhunt of the mountainous terrain. The search was called off a few days later.

Fisher was known as an avid survivalist, hunter and angler. Officials say he would be capable of sustaining himself.

More on the Robert Fisher case: