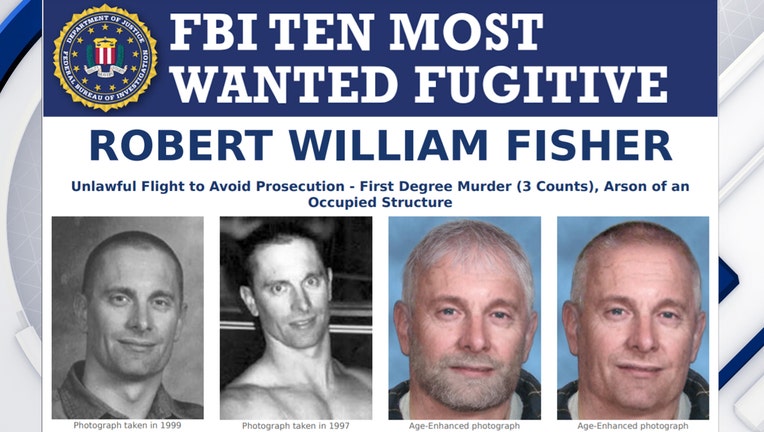 PHOENIX (AP) -- There is no reason to believe that a suburban Phoenix man who disappeared after the 2001 slayings of his wife and children is dead, authorities said.

Fisher, who would be 54 now, has been missing since his Scottsdale home exploded on April 10, 2001, and the passage of time necessitated a new rendering of the suspect, who is on the FBI's Ten Most Wanted Fugitives list, authorities said. The agency had been publishing a photo of Fisher taken in 1999.

"It's a difficult case to work because he's a loner," Special Agent Robert Caldwell said. "Loners are difficult to find."

Investigators still get tips about possible Fisher sightings - one as recently as last week. But the hope is an updated image will generate even more calls, said Acting Special Agent in Charge Justin Tolomeo. Authorities have offered a reward of up to $100,000 for information leading to his arrest.

Fisher is wanted on charges that include three counts of murder, arson of an occupied structure and unlawful flight to avoid prosecution.

Authorities found the bodies of Mary Fisher, 38, and the couple's children, Robert Jr., 10, and Brittney, 13, in their beds amid debris in April 2001. All three had their throats slashed, while Mary Fisher also had suffered a gunshot wound to the head.

Based on interviews with friends and family, investigators believe Mary Fisher was making plans to leave her husband. But Fisher, a child of divorce, killed the family rather than allow a split to happen.

Investigators determined the explosion was arson and triggered by the disconnection of a natural gas line.

Fisher, who was 40 years old at the time, was seen the night before. Police said the family attended a hunting safety class while he shopped for camping-related supplies at nearby stores.

Less than two weeks later, authorities found Fisher's abandoned SUV and his dog about 90 miles northeast of Phoenix near the town of Young. Believing Fisher was possibly hiding out in a series of caves, more than 100 officers conducted a manhunt of the mountainous terrain. The search was called off a few days later.

Fisher was known as an avid survivalist, hunter and angler. Officials say he would be capable of sustaining himself.

"Our theory is he wanted to start with a clean slate," Special Agent Robert Caldwell said.