WASHINGTON - The U.S. Food and Drug Administration authorized Moderna’s coronavirus vaccine for emergency use on Friday, the second vaccine to be approved by U.S. regulators to prevent severe COVID-19 illness.

FDA Commissioner Stephen M. Hahn, called the approval "another crucial step in the fight against this global pandemic."

"Through the FDA’s open and transparent scientific review process, two COVID-19 vaccines have been authorized in an expedited timeframe while adhering to the rigorous standards for safety, effectiveness, and manufacturing quality needed to support emergency use authorization that the American people have come to expect from the FDA," Hahn said in a statement.

The Director of the National Institutes of Health, Francis S. Collins called the emergency use authorization "A remarkable scientific achievement."

"The partnership to develop the mRNA-1273 vaccine is a prime example of the tremendous good that can be accomplished when the public and private sectors work together to address a serious public health problem," Collins added in a statement.

The vaccine's approval came one day after a panel of FDA advisers, in a 20-0 vote, ruled that the benefits of the vaccine outweighed the risks for those 18 years old and up.

The campaign kicked off earlier this week with the first vaccine OK'd in the U.S., developed by Pfizer and BioNTech. Moderna’s shot showed similarly strong effectiveness, providing 94% protection against COVID-19 in the company’s ongoing study of 30,000 people.

After eight hours of discussion over technical details of the company’s study and follow-up plans, nearly all panelists backed making the vaccine available to help fight the pandemic. One panel member abstained.

"The evidence that has been studied in great detail on this vaccine highly outweighs any of the issues we’ve seen," said Dr. Hayley Gans of Stanford University Medical Center.

A second vaccine is urgently needed as coronavirus infections, hospitalizations and deaths climb to new highs ahead of the holidays. The U.S. leads the world in virus totals, with more than 1.6 million confirmed cases and more than 310,000 reported deaths.

Moderna’s vaccine uses the same groundbreaking technology as Pfizer-BioNTech’s shot. Most traditional vaccines use dead or weakened virus, but both of the new vaccines use snippets of COVID-19’s genetic code to train the immune system to detect and fight the virus. Both require two doses; Moderna's is four weeks apart. 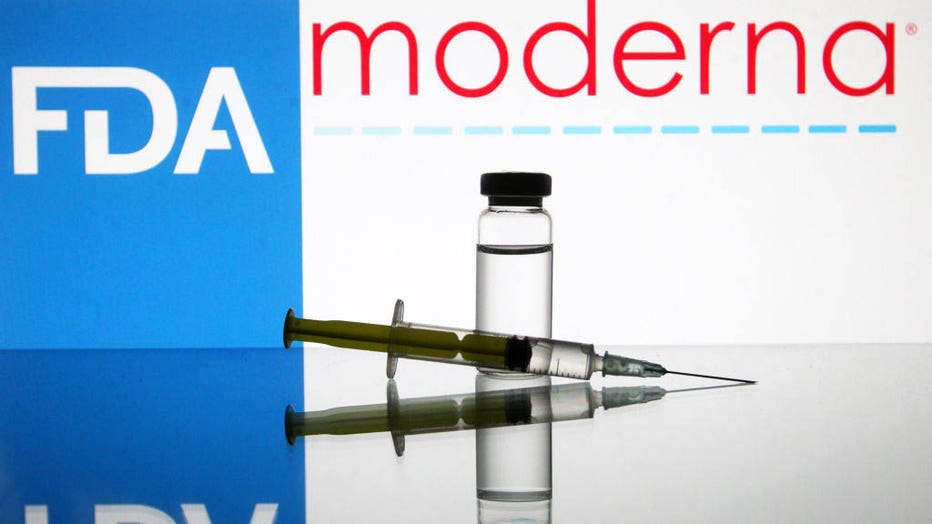 In this photo illustration, a vial and a medical syringe are displayed in front of the Food and Drug Administration (FDA) of the United States and Moderna biotechnology company's logos. (Photo Illustration by Pavlo Gonchar/SOPA Images/LightRocket via

The two new vaccines will hopefully help "break the back of the pandemic," said Dr. Arnold Monto of the University of Michigan, who chaired the panel.

Thursday's review came days after reports of apparent allergic reactions to the Pfizer-BioNTech vaccine in two Alaska health workers. One person had a severe reaction, including shortness of breath, the other had less serious side effects, including lightheadedness.

While the two vaccines use the same technology, they’re not identical, cautioned Moderna chief medical officer Dr. Tal Zaks. In particular, some of the lipids, or fats, used to coat the two vaccines are different.

"I would not necessarily assume" that any reactions would be the same, he said.

The FDA found no severe allergic reactions in Moderna’s data but flagged a slightly higher rate of less serious side effects — rash, hives, itching — among participants who got the vaccine, compared with those receiving a dummy shot.

There were also three cases of Bell’s palsy, which temporarily paralyzes facial muscles, among vaccine recipients, compared with just one among those getting a dummy shot. The FDA review said the role of the shot in the vaccine group "cannot be ruled out."

An unanswered question is whether the vaccine also prevents people from symptomless infection — but Moderna found a hint that it may. Study participants had their noses swabbed prior to the second dose of either vaccine or placebo. At that one timepoint, swabs from 14 vaccine recipients and 38 placebo recipients showed evidence of asymptomatic infection, said Moderna’s Dr. Jacqueline Miller.

Moderna is just starting to study its vaccine in children ages 12 to 17. Testing in younger children is expected to start early next year.

"This achievement is yet another testament to the dedication of FDA’s career scientists and physicians, who have been working urgently to conduct comprehensive and rigorous evaluations of the data submitted for vaccines to prevent COVID-19," said Marks.

After the FDA acts, U.S. officials plan to move out an initial shipment of nearly 6 million Moderna doses. The vaccine needs to be stored at regular freezer temperatures, but not the ultra-cold required for Pfizer-BioNTech’s shot.

With the addition of Moderna’s vaccine, government officials project that 20 million Americans will be able to get their first shots by the end of December and 30 million more in January.

Hundreds of millions of additional shots will be needed to eventually vaccinate the general public, which isn’t expected until the spring or summer. The government’s Operation Warp Speed program has orders for 200 million doses of Moderna’s vaccine. That’s on top of 100 million doses of the Pfizer-BioNTech vaccine. Officials are negotiating to purchase more doses of that vaccine and there are more vaccines in the pipeline.

Like the first vaccine, Moderna’s will remain experimental as the company continues a two-year study needed to answer key questions, including how long protection lasts.

One of the trickiest issues panelists debated was how to keep study volunteers who received a dummy shot from dropping out to get the real shot. Their participation is critical in order to have a comparison for long-term safety and effectiveness.

Moderna proposed immediately alerting all those volunteers of their status and offering them the vaccine. The company said more than 25% of its participants are health workers and some are already leaving to get the Pfizer vaccine.

But Dr. Steven Goodman, an invited expert from Stanford University, suggested Moderna adopt Pfizer's approach. That company plans to gradually vaccinate people in its placebo group based on when they would have normally had access to the vaccine, as priority groups are established.

But most panelists acknowledged it will be hard to keep volunteers from leaving the Moderna study if they have to wait to get a shot.

"The reality may make that too difficult to do," said Dr. Steven Pergam of the Seattle Cancer Care Alliance.

Exactly how to treat the trial participants who got dummy shots is important beyond the ethics: Moderna noted that the only COVID-19 death among the 30,000 volunteers was in a placebo recipient, a 54-year-old man whose only risk factor was diabetes.

Knowing there could be more severe coronavirus in placebo recipients as the pandemic continues "weighs heavily on me," said Moderna’s Miller.