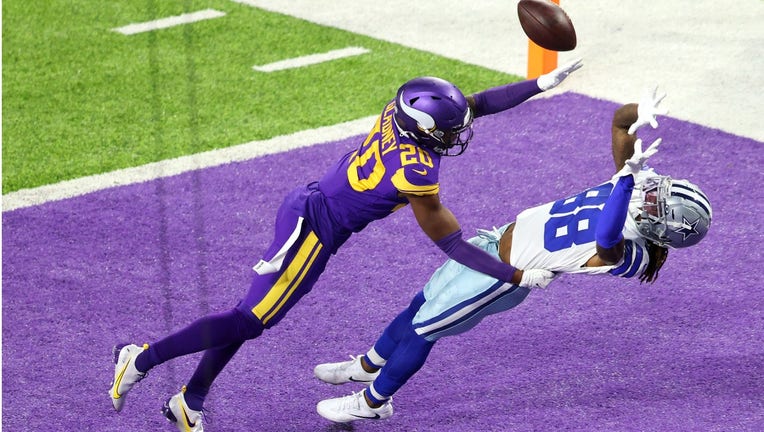 CeeDee Lamb #88 of the Dallas Cowboys pulls in a touchdown pass against Jeff Gladney #20 of the Minnesota Vikings during their game at U.S. Bank Stadium on November 22, 2020 in Minneapolis, Minnesota. ((Photo by Adam Bettcher/Getty Images))

MINNEAPOLIS - Former Minnesota Vikings defensive back Jeff Gladney was found not guilty of assault on Thursday in an incident involving a female acquaintance, nearly a year after turning himself into authorities in Texas.

Gladney was indicted by a grand jury last August on one felony count of domestic assault. According to court documents, he had been charged with "domestic violence by impeding breathing, for intentionally, knowingly recklessly causing bodily injury and applying pressure to a woman's neck and throat."

He turned himself into authorities in Texas last April, posted boned and was quickly released.

The Vikings released Gladney on Aug. 3, 2021. He didn’t participate in any offseason workouts, and was not with the team when they started training camp at TCO Performance Center. The Vikings used a first round pick on Gladney, No. 31 overall, in the 2020 NFL Draft. It was the same draft that they took Justin Jefferson with their top overall pick.

On Thursday, a jury found him not guilty in the case. While he wasn't convicted, he still could face discipline from the NFL if league officials determine he violated the personal conduct policy.

Gladney made 15 starts in his rookie season, finishing with 81 tackles, seven tackles for a loss and forced one fumble. Gladney did not play last season while his legal case played out.