LONDON (AP) - The Group of Seven wealthy democracies agreed Saturday to support a global minimum corporate tax of at least 15% in order to deter multinational companies from avoiding taxes by stashing profits in low-rate countries.

G-7 finance ministers meeting in London also endorsed proposals to make the world's biggest companies - including U.S.-based tech giants - pay taxes in countries where they have lots of sales but no physical headquarters.

Britain’s Treasury chief Rishi Sunak, the meeting's host, said the deal would "reform the global tax system to make it fit for the global digital age and crucially to make sure that it’s fair, so that the right companies pay the right tax in the right places."

U.S. Treasury Secretary Janet Yellen, who attended the London meetings, said the agreement "provides tremendous momentum" towards reaching a global deal that "would end the race-to-the-bottom in corporate taxation, and ensure fairness for the middle class and working people in the U.S. and around the world."

Nations have been grappling for years with the question of how to deter companies from legally avoiding paying taxes by using accounting and legal schemes to assign their profits to subsidiaries in tax havens - typically small countries that entice companies with low or zero taxes, even though the firms do little actual business there. International discussions on tax issues gained momentum after U.S. President Joe Biden backed the idea of a global minimum of at least 15% — and possibly higher — on corporate profits.

The meeting of finance ministers came ahead of an annual summit of G-7 leaders scheduled for June 11-13 in Cornwall, England. The U.K. is hosting both sets of meetings because it holds the group’s rotating presidency.

Manal Corwin, a tax principal at professional services firm KPMG and a former Treasury Department official, said the meeting had clarified where important countries stood on several key issues, including the 15% minimum.

"Signaling that there is consensus around some of the key features of what’s being discussed globally was really, really important so they have the momentum to go to the next phase of this with the G-20," she said.

The endorsement from the G-7 could help build momentum for a deal in wider talks among more than 140 countries being held in Paris as well as a Group of 20 finance ministers meeting in Venice in July. 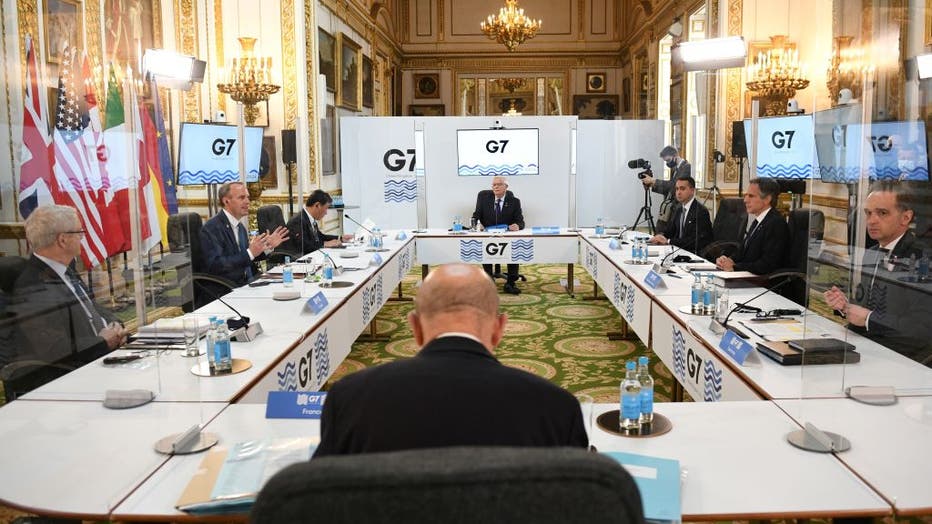 G7 foreign ministers meet in London for their first face-to-face talks in more than two years, with calls for urgent joined-up action to tackle the most pressing global threats. (Photo by STEFAN ROUSSEAU/POOL/AFP via Getty Images)

The tax proposals endorsed Saturday have two main parts. The first part lets countries tax a share of the profits earned by companies that have no physical presence but have substantial sales, for instance through selling digital advertising.

France had launched debate over the issue by imposing its own digital services tax on revenues it deemed to have been earned in France by companies such as Google, Amazon and Facebook. Other countries have followed suit. The U.S. considers those national taxes to be unfair trade measures that improperly single out American firms.

Part of the agreement Saturday is that other countries would repeal their unilateral digital taxes in favor of a global agreement.

Facebook’s vice-president for global affairs, Nick Clegg, said the deal is a big step toward increasing business certainty and raising public confidence in the global tax system but acknowledged it could cost the company.

"We want the international tax reform process to succeed and recognize this could mean Facebook paying more tax, and in different places," Clegg said on Twitter.

The G-7 statement echoes a U.S. proposal to let countries tax part of the earnings of the "largest and most profitable multinational enterprises — digital or not — if they are doing business within their borders. It supported awarding countries the right to tax 20% or more of local profits exceeding a 10% profit margin.

Yellen, asked if she had given her European counterparts assurances that large U.S. tech firms would be included, said the agreement "will include large profitable firms, and I believe those firms will qualify by almost any definition."

The other main part of the proposal is for countries to tax their home companies' overseas profits at a rate of at least 15%. That would deter the practice of using accounting schemes to shift profits to a few very low-tax countries because earnings untaxed overseas would face a top-up tax in the headquarters country.

At home, Biden is proposing a 21% U.S. tax rate on companies' overseas earnings, an increase from the 10.5%-13.125% enacted under former President Donald Trump. Even if the U.S. rate winds up higher than the global minimum, the difference would be small enough to eliminate most room for tax avoidance. Biden's proposal requires congressional approval.

KPMG's Corwin said the final statement was silent on several key points, including exactly which of the "largest and most profitable" multinationals would be covered by the proposal and how companies would be protected from double-billing if countries disagree on who has the right to tax them. Those complexities are fodder for the G-20 talks and the ongoing Organization for Economic Cooperation and Development talks in Paris.

"The devil is in the details," Corwin said.

The Group of 7 is an informal forum among Canada, France, Germany, Italy, Japan, the UK and the United States. European Union representatives also attend. Its decisions are not legally binding, but leaders can use the forum to exert political influence.