Home security footage shows the man fleeing after being caught off guard by the 10-year-old sitting in her family’s SUV in Bakersfield, California.

BAKERSFIELD, Calif. - Home security video shows the moment a 10-year-old girl scared away a man as he approached her home in California.

The video, captured May 21 in Bakersfield, shows the man walking down the street before turning up the driveway to approach the family’s house. He fails to spot Lola Letourneau, who happened to be sitting in her parents’ SUV parked in the driveway.

Letourneau had been “helping out her mom by starting the car and turning the air conditioning on,” according to KSCO-TV. In the video, she notices the man getting closer to the home and jumps out of the vehicle.

“Hey, get off… get out of here,” she can be heard yelling in the video.

The man immediately flees as the girl runs toward her home. 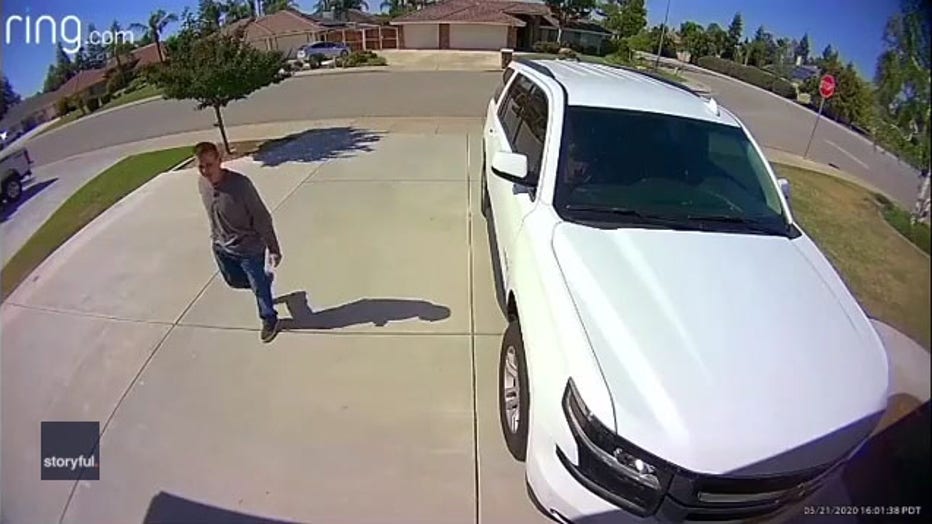 Video captured on May 21, 2020 shows Lola Letourneau scaring off a stranger as he walks up the driveway to her family’s home in Bakersfield, California. (Photo credit: Dylan Pendley via Storyful)

"I just knew I needed to tell him to leave," Letourneau told KSCO-TV. "So I just thought of a bunch of words to like tell him to go away.“

Her stepfather, Dylan Pendley, told the girl that if she were ever faced with such a situation to “just yell.”

“Especially with the pandemic going on, there’s a lot of people home, just scream and someone is going to come outside,” Pendley told KSCO.

The family reported the incident to the Kern County Sheriff's Office.

RELATED: Video shows boy, 10, run for safety after men attempt to lure him into car with candy