Jolynn McCabe has battled alcoholism for 16 years. And when the Fremont grandmother recently relapsed, she realized she needed help. So, she asked her husband to call 911, hoping paramedics would get her detoxed and take her to a rehabilitation facility. But what started as a crisis call on Sept. 13, quickly escalated into a violent confrontation with law enforcement. Evan Sernoffsky reports

FREMONT, Calif. - Jolynn McCabe has battled alcoholism for 16 years. And when the Fremont grandmother recently relapsed, she realized she needed help. So, she asked her husband to call 911, hoping paramedics would get her detoxed and take her to a rehabilitation facility.

But what started as a crisis call on Sept. 13, quickly escalated into a violent confrontation with law enforcement. Officers put McCabe, who is 56 years old and weighs 115 pounds, in a full-body restraint before taking her to Santa Rita Jail in Dublin. At the jail, a run-in with deputies left her almost unrecognizable with purple bruises on her face.

Police said McCabe was under suspicion of being drunk in public. She was never charged.

“I wanted help,” McCabe said in a recent interview with KTVU. “We called for help. This was not the kind of help we wanted.”

In their report, Fremont police described her as “combative,” “assaultive,” “hostile” and “uncooperative.” When she got to jail, she was listed as a “priority booking” inmate.

And while she remembers talking back to authorities in her altered state, McCabe also believes the police went too far. And she still has so many questions.

Why did police have to come anyway? Why did she have to get arrested and thrown in jail? Could her injuries have been avoided if society dealt with drug addiction and mental health crises in a different way?

“Why am I in the back of a cop car when I called for help?” she remembers thinking.

Her situation highlights a growing movement by cities to stop sending police when people call 911 for non-criminal emergencies – like mental health or substance abuse issues. It’s also a way advocates say society can make good on recent calls to reform police departments since the May death of George Floyd in Minneapolis.

Last week, San Francisco launched a pilot program of non-law enforcement first-responders dedicated to people experiencing a mental health crisis. Mayor London Breed called it an “important first step in our long-term effort change how we respond to people suffering on our streets." 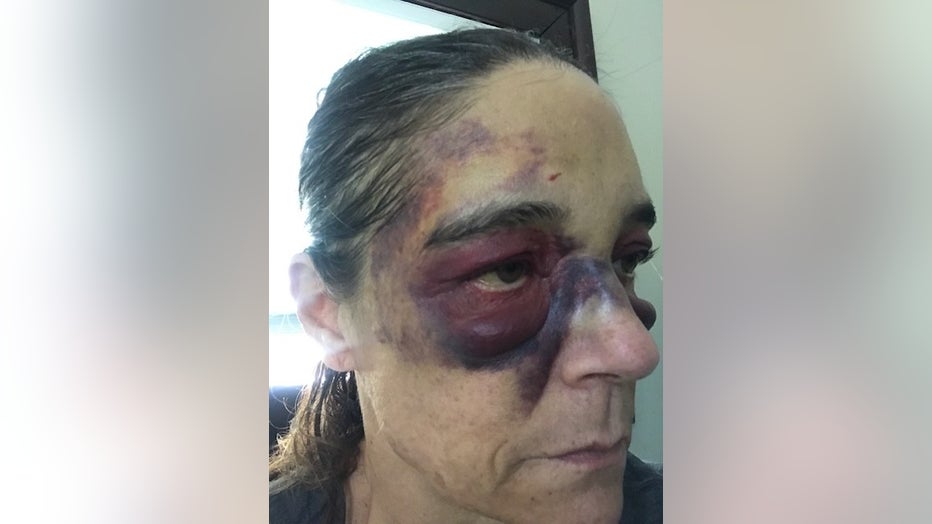 Jolynn McCabe took pictures after she was put in a wristlock at Santa Rita Jail for not letting deputies close the cell door on Sept. 13.

Looking to Eugene, Ore. for guidance

In his campaign for district attorney last year, Chesa Boudin proposed the same idea based on the Crisis Assistance Helping Out On The Streets, or CAHOOTS, program run by the White Bird Clinic in Eugene, Oregon.

“We should have alternative emergency responders available 24/7 to deal with the vast majority of calls for service that do not involve a crime in progress,” Boudin said.

The program has teams made up of one crisis worker and one paramedic who are dispatched 24/7 through the 911 system to respond to crisis calls. They handle about 30,000 calls a year and require police backup in fewer than 1% of cases. No one has been seriously injured in three decades, said White Bird spokesman Tim Black.

“It’s been our experience that just the fact that we are showing up instead of police can really go a long way to de-escalate a situation and get that buy-in from the patients we’re trying to serve,” he said.

Black said that precisely because the clinical staff at White Bird do not carry weapons, they arrive at a scene with a “different skill set and different resources,” which means that the outcomes will be different, too.

The CAHOOTS program budget is about $2.1 million a year, while the combined annual budgets for the police departments in Eugene and adjoining city, Springfield, is $90 million. Last year, the CAHOOTS teams answered 17% of the Eugene Police Department’s overall call volume. The program saves the city an estimated $8.5 million in public safety spending annually, according to the clinic.

Black, though, emphasized that governments and nonprofits must provide social services to help the person once the immediate crisis has subsided rather than dump them at a hospital or jail. The White Bird Clinic offers counseling, medical and even dental help.

Since George Floyd, Black said about 450 cities have inquired about starting a program like CAHOOTS in their neighborhoods. 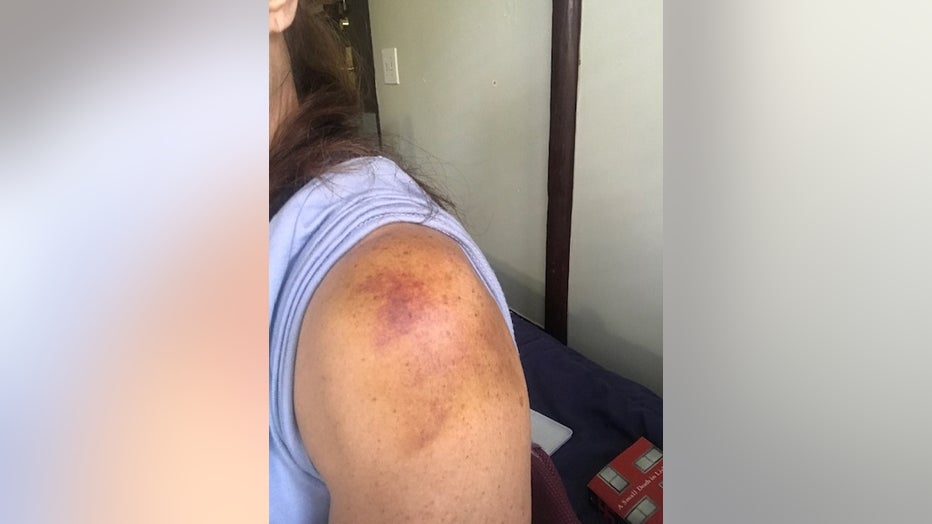 Oakland is one of those cities.

Grassroots groups including the Coalition for Police Accountability and the Urban Strategies Council have spearheaded a new model called MACRO, short for Mobile Assistance Community Responders of Oakland.

Police reform activist Anne Janks said that the city has already budgeted $1.8 million for the first pilot year to staff a mobile crisis unit run through the Department of Violence Prevention and units could be ready to serve neighborhoods in East and West Oakland by January.

“The goal would be to solve the problem for the next two hours,” Janks said. “What can we do right now? Have a conversation. Smoke a cigarette. Find out why they’re upset. How can we help you find the solution? When you do that, you can usually get someone to settle down.”

Fremont, where McCabe called for help and was ultimately arrested, also has its own version of crisis response called Mobile Evaluation Team that’s operated since 2017.

But the part-time unit employs one police officer and either a mental health worker or a nurse Monday through Thursday from 6 a.m. to 4 p.m.

McCabe’s husband called for help on a Sunday morning when the team was off.

Police Sgt. Paul McCormick, who supervises the unit, acknowledged that more needs to be done to address the mental health needs of residents and that each call can take several hours.

He wouldn’t specifically discuss McCabe’s case, but said one major challenge to creating a successful mobile crisis team is “finding people who want to do the job in the field” and “deal with people who are potentially violent.”

But unlike the CAHOOTS approach, McCormick said it’s important to have police present because therapists cannot put hands on people and physically take them into custody if necessary.

“If a person says, ‘I don’t want to go. I don’t want to get in the ambulance,’ then some level of force has to be applied,” McCormick said. “If the person is being belligerent, combative and violent, we have to do what is necessary to protect ourselves, protect her and protect the rest of the community.” 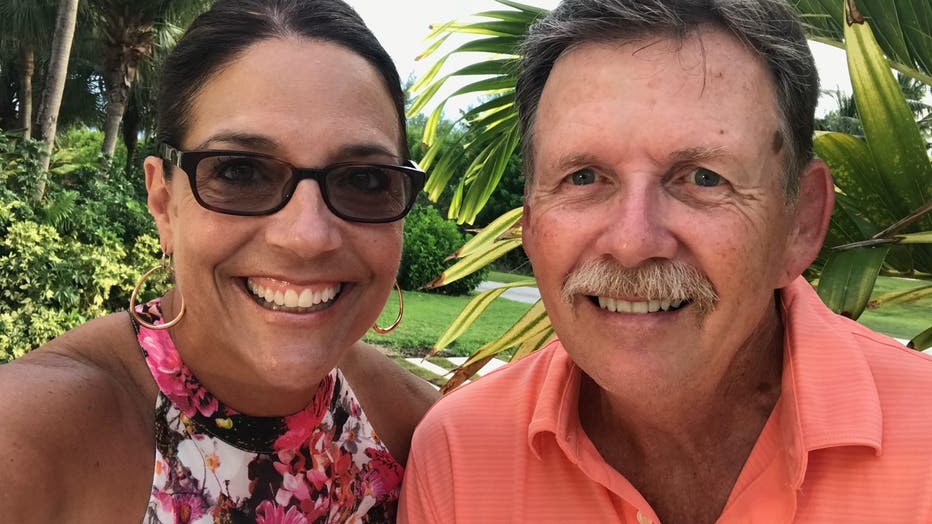 Jolynn and Keith McCabe in the Bahamas.

Deputies say McCabe wouldn't comply; she says she was panicked

After her arrest, Alameda County sheriff's deputies said they felt compelled to subdue McCabe because she was resisting their comands, according to an incident report obtained by KTVU,

Deputies tried to put her in a cell, but McCabe stuck her legs and arms out to prevent them from closing the cell door, deputies wrote in their report. Deputy Jeremy Lucha said he eventually put her in a rear wristlock because she was refusing orders and was grabbing at his colleague’s thumb.

At one point, a deputy took her to the ground. During the altercation, she hit her head. She showed KTVU photographs of the bruising: Her eyes and face turned purple and yellow.

Her husband, Keith McCabe, added that “when she’s drinking she might not be the most cooperative person, but she didn’t deserve what she got.” He said he called 911 that night for an ambulance, not police. The last time he tried to drive his wife to the hospital for her alcoholism, she jumped out of the car.

In an interview after her release from jail and alcohol rehab, McCabe described having a panic attack at the jail.

Attorneys for the sheriff’s office refused to provide body camera of the encounter, saying they didn’t feel she suffered any great bodily injury. It's therefore impossible for the public to know whose version of the story is more accurate.

After being locked in the cell, deputies noticed the wound on McCabe’s head was getting worse.

They took her to a nearby hospital in Pleasanton and then put her in a cab home.

When she arrived at 3 a.m., her husband said he was “in shock” after looking at her.

“It looked like someone just beat the heck out of her,” Keith McCabe said.

The next day, McCabe checked into a month-long rehabilitation facility in Berkeley.

Living with nightmares and nerve damage

She said she has some nerve damage on her forehead, thumb and wrist. She has nightmares where she dreams that half her head is missing. Her vision is blurry. And the headaches are daily.

She’s not sure what next steps are in store for her, especially since she is struggling to stay sober.

But one thing she knows for sure is if she needs assistance with her addiction, she’s not going to repeat the same steps.