The incident unfolded at the parking lot of a home improvement store in the area of Country Club Drive and Hampton Avenue in Mesa. FOX 10's Stephanie Bennett reports.

PHOENIX - On July 20, police in Mesa, Arizona stopped an incident involving a stolen car by deploying a device known as the Grappler Police Bumper.

The incident began when police were alerted to a stolen car near Country Club Drive and Hampton Avenue in Mesa, police said. Patrol officers and officers in unmarked vehicles responded and spotted the stolen vehicle in the parking lot of a Home Depot.

The SUV, according to Mesa Police Det. Richard Encinas, got out of the parking lot and onto Country Club Drive, where an unmarked unit "was able to deploy his Grappler and bring the vehicle to a safe stop."

"Big old thing that came out from underneath the police car and grabbed this car, tied a little rope on the car, and stopped it," said Ginnie Grant, who watched the incident unfold.

Here's what you should know about the device that stopped not only the stolen car mentioned above, but other cars involved in police situations across the Phoenix area in recent years.

What is this thing?

We first profiled the Grappler Police Bumper in 2016. In that report, the Grappler was described as a device that works by using a heavy-duty nylon net that can be lowered from the front of the pursuing police vehicle with the touch of a button to snag the rear tire of the suspect vehicle, wrapping around the axle.

Once the Grappler has a hold of the suspect vehicle, the officer can then release a tether from the police car and back away to a safe distance. Within a few seconds, the car comes to a controlled stop without the officer having to force a collision.

"You hear a noise you're not used to, and it just basically feels like you lose power. It just slows you down fairly immediately," said Chris Smith, who

Who invented the Grappler?

A Peoria man named Leonard Stock was the person who came up with the Grappler,

In our 2016 report, Stock said the idea came to him in the middle of the night, after he watched a television show about high-speed chases.

"The conclusion of one of the chases was an innocent motorist getting T-boned, and I went to sleep that night just so aggravated that this was happening, and I woke up at 3:00 in the morning just suddenly, and this was the first thought I had," said Stock.

It took Stock roughly eight years of research and development to finally get the Grappler ready to market to police agencies nationwide.

What law enforcement agencies use the Grappler?

Besides Mesa Police, a number of other law enforcement agencies use the Grappler.

On the Grappler Police Bumper's website, the U.S. Customs and Border Protection was listed as an agency that uses the device.

In a 2019 Facebook post, sheriff's officials with Cass County in Missouri announced that they used the device to stop a police pursuit.

In 2021, officials with the Arizona Department of Public Safety announced that one of their troopers deployed the device during a pursuit that was taking place in the southeastern portion of the state.

In April 2022, Phoenix Police officers were seen deploying the Grappler during a police pursuit that ended on the I-10 in the East Valley.

The Grappler's use was captured by SkyFOX.

"That was the perfect scenario. The perfect execution of the Grappler," said Stock. "We’ve only had a few stories where some of the uses have been on a dashcam, and so, it’s been limited, but for it to be on live TV, it's pretty exciting."

Are there other entities that use the Grappler?

How much does it cost to install a Grappler device?

According to a 2019 article by MotorTrend, the cost of installing a Grappler is $5,000, which includes training. 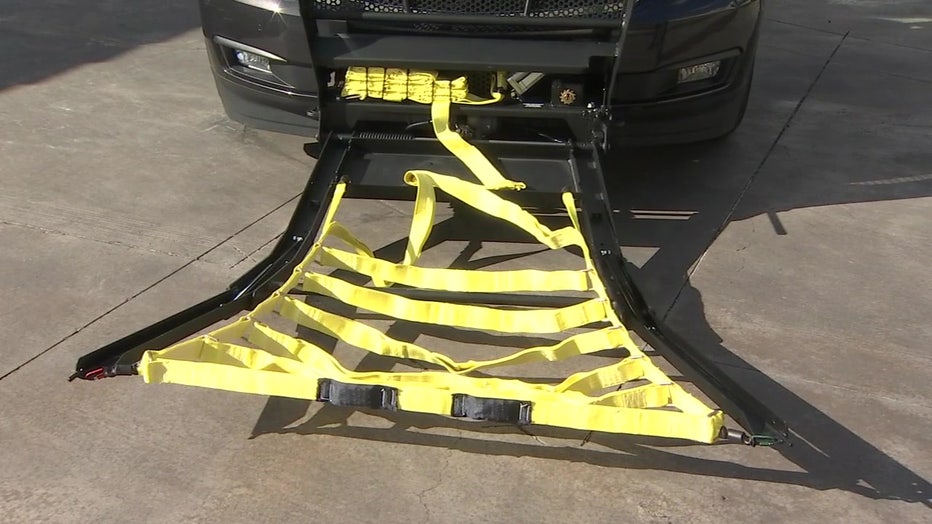