The chase began in North Scottsdale, and took police to different parts of the Valley. The driver involved in the pursuit was eventually arrested. FOX 10's Stephanie Bennett reports.

PHOENIX - A 30-year-old man has been arrested after leading law enforcement on a chase across the Phoenix metropolitan area and ramming two police vehicles on April 29, authorities said.

According to court documents, officers responded to the area of Cave Creek and Deer Valley Roads at around 2:30 p.m., for reports of a man who was passed out behind the wheel of a car.

"Numerous bystanders attempted to wake up the individual by attempting to get his attention by tapping the glass but the subject was not responding," read a portion of court documents.

Once at the scene, officers found the man passed out inside the running car.

When the man woke up, he rammed his car back and forth into the police cars and was eventually able to drive off, police said. Officers did not pursue the car, but a police helicopter was used to keep surveillance on the car, while detectives from Phoenix Police's tactical support bureau responded.

"The vehicle was eventually grappled and stopped near 48th Street and the I-10," police said in a statement.

The suspect allegedly resisted arrest by holding onto the open sunroof of the car while attempting to kick officers who were trying to take him into custody.

The suspect was later identified as Brandon Smith, 30. After his arrest, a white crystal-like substance was found in his vehicle, as well as two blue M30 pills. Smith is accused of multiple charges, including criminal damage, driving under the influence, weapons misconduct, drug possession, and unlawful flight from law enforcement. 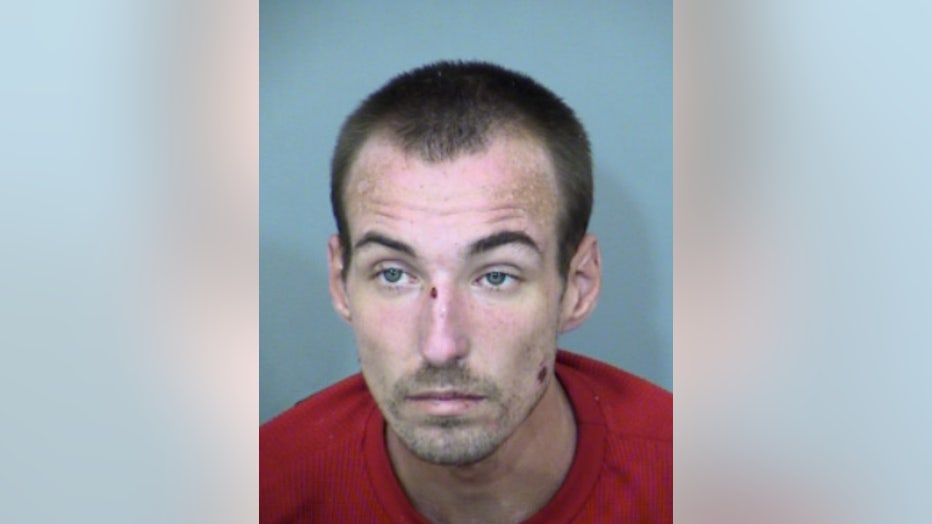 What is the grappler device that was used in the incident?

In 2016, we reported on the Grappler Police Bumper, which was created by a Peoria man who was frustrated by the number of innocent people getting injured or killed during high-speed pursuits.

"The options right now are getting in front of a suspect vehicle to deploy tire spikes or using the pit maneuver or some type of smash up derby style process to stop a vehicle and the officer many times is pinned against a suspect vehicle," said Leonard Stock, in 2016.

The Grappler Police Bumper works by using a heavy-duty nylon net that can be lowered from the front of the pursuing police vehicle with the touch of a button to snag the rear tire of the suspect vehicle, wrapping around the axle. Within a few seconds, the case comes to a controlled stop without the officer having to force a collision.

"Well, when you have a vehicle, 7,000 pounds of steel, traveling down the road with an unpredictable suspect in there, it’s kind of important to stop the vehicle," said Stock, in a telephone interview with us on April 29.

Stock said the technique used in deploying the Grappler during the pursuit was ‘textbook.’

"That was the perfect scenario. The perfect execution of the Grappler," said Stock. "We’ve only had a few stories where some of the uses have been on a dashcam, and so, it’s been limited, but for it to be on live TV, it's pretty exciting."

High-speed chases are one of the most dangerous situations police officers can find themselves in. Roughly 40 percent of the pursuits end in a crash, but that could change thanks to an Arizona man's invention called the Grappler. FOX 10's Marc Martinez reports.