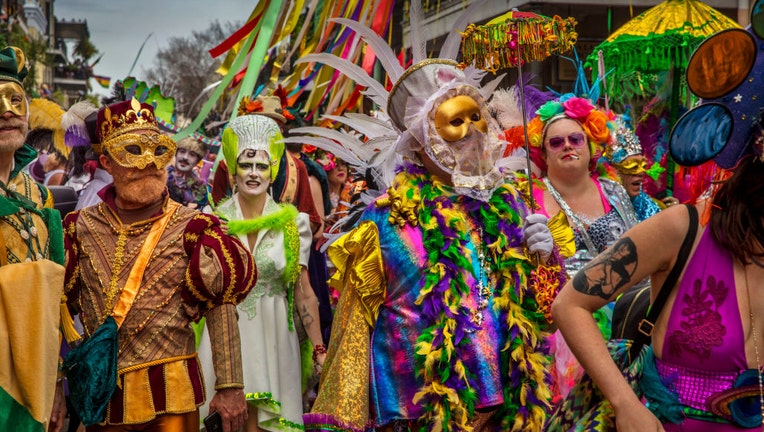 The Society of Saint Anne parade during Mardi Gras in the French Quarter of New Orleans, Louisiana. Mardi Gras is the biggest celebration the city hosts every year. (Photo by Barry Lewis/In Pictures via Getty Images)

New Orleans’ health director says she won’t take part in one of the earliest parades of the Mardi Gras season, citing threats over the city's resumption of COVID-19 restrictions to combat the highly contagious omicron variant.

The Krewe du Vieux says it still considers Dr. Jennifer Avegno its queen and will include her float in its parade, one of the first in the Carnival season leading up to Fat Tuesday, news outlets reported. The parade, known for wild satire, will be held Feb. 12 under the theme "Vaxxed and Confused."

Avegno's letter to the parade group did not describe any specific threats, The Times-Picayune / The New Orleans Advocate reported.

But she wrote that city officials are facing more "negativity and hatred" since COVID-19 mitigation measures were re-imposed.

"I do not want to create a security risk by my participation," Avegno wrote, "and so believe the best place for me this year is behind the scenes helping to continue protecting our community."

This year, Carnival is going on despite rapidly rising COVID-19 cases driven by the omicron variant. State officials said last week that Louisiana's surge may be peaking but numbers are expected to remain high.

A city spokesperson told the newspaper that Avegno’s decision does not imply that other city officials will avoid public appearances during the Mardi Gras season.

Avegno said on Jan. 11 that masks would again be required in indoor public spaces, days after New Orleans entered the Carnival season that began Jan. 6 and climaxes on Mardi Gras, March 1 this year.

When the Krewe du Vieux announced Avegno's decision on its Facebook page, it also said it was shortening its route because of a shortage of police officers. City officials had announced in December that major parades would have shorter routes because there are fewer police officers, medics and other first responders to handle crowds.

"Krewe du Vieux will spare no effort in making sure that her decision receives our Krewe’s signature treatment during the parade," the group posted on its Facebook page, according to news reports.