The Champlain Towers South collapse, as seen from a neighboring building.

Surfside Mayor Charles Burkett said the building manager told him the tower was quite full at the time of the collapse, but the exact number of people present was unclear.

"The building is literally pancaked," Burkett said. "That is heartbreaking because it doesn’t mean to me that we are going to be as successful as we wanted to be in finding people alive."

The collapse happened at the Champlain Towers South, located at 8777 Collins Avenue in Surfside, north of Miami Beach.

About half of the building's roughly 136 units were affected, Miami-Dade County Mayor Daniella Levine Cava told a news conference. Rescuers pulled at least 35 people from the wreckage by mid-morning, and heavy equipment was being brought in to help stabilize the structure to give them more access, Raide Jadallah of Miami-Dade Fire and Rescue said.

Cava said as of 5 p.m., 102 residents had been accounted for but at least 99 had not — though some of those missing may not have been in the building at 1:20 a.m., the time of the disaster.

Aerials from SkyFOX in Surfside, Florida show the partial collapse of a condo on Thursday morning. The video shows the rubble, search and rescue efforts, and objects such as a damaged bunk bed and air conditioning units hanging from their wire.

The tower has a mix of seasonal and year-round residents, and while the building keeps a log of guests staying, it does not keep track of when owners are in residence, Burkett said.

Earlier, Mayor Burkett said two people were brought to the hospital, one of whom died. He added that 15 families walked out of the building on their own.

Gov. Ron DeSantis said officials were "bracing for some bad news just given the destruction that we’re seeing."

Rescuers said 35 occupants were pulled from the structure and two were rescued from the rubble. Ten people on site were treated, and two of those were transported to the hospital. One has passed away.

Mayor Burkett said he believes there are still people buried underneath. Rescuers said they were using sonar devices to listen for sounds coming from the rubble. Officials said they have heard sounds of what appears to be banging coming from the pile, but have not picked up voices. 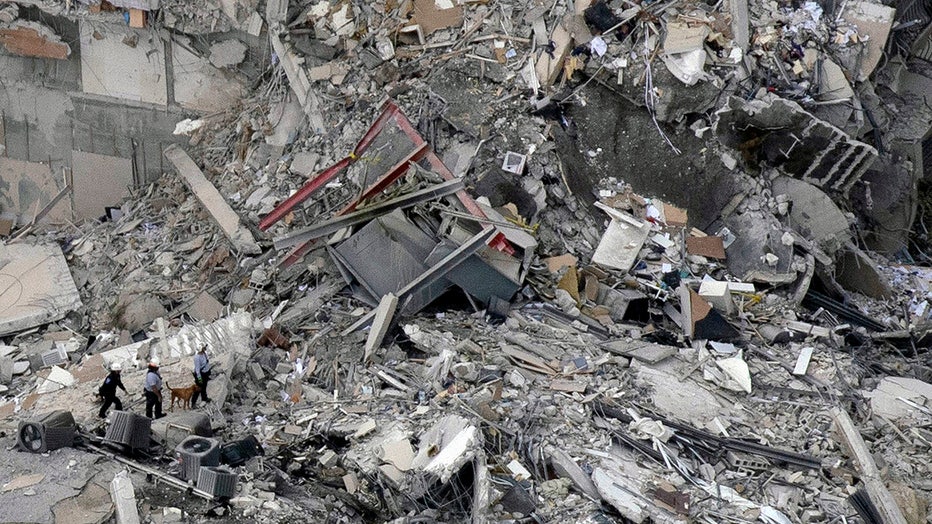 Search and rescue personnel with a K9 unit are dwarfed by the rubble of a 12-story residential tower that partially collapsed on June 24, 2021 in Surfside, Florida. (Photo by Joe Raedle/Getty Images)

"The optics may seem that nothing is going on on top but all operations, I cannot emphasize enough, all operations are occurring underneath the rubble, underneath the parking garage, where we have teams of firefighters constantly as they continue making cuts, breaches, placing sonar devices, search cams to locate victims," said Miami-Dade Fire Rescue Assistant Fire Chief Raide Jadallah.

Miami-Dade Fire Rescue said as the building shifted, a small fire broke out in the rubble mid-afternoon, but was extinguished within 20 minutes. 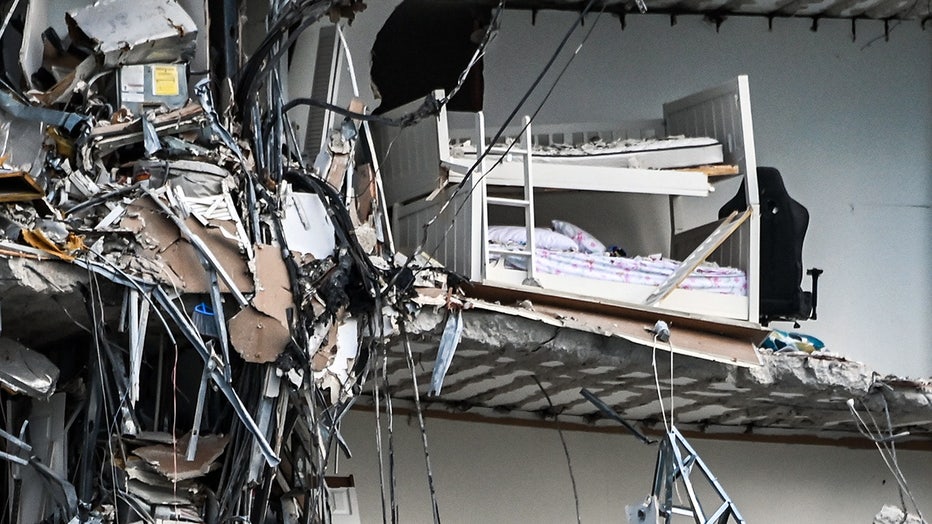 Rubble hangs from a partially collapsed building in Surfside north of Miami Beach, on June 24, 2021. (Photo by CHANDAN KHANNA/AFP via Getty Images)

Roof work was being done for at least 30 days, but it’s unclear if it’s connected.

"But there is roof work being done all the time," Burkett said. "It looks like a bomb went off. Buildings don’t just fall down like this. We just don’t have any answers right now but we’ll find them. We’ll get them."

"There’s no reason for a building like this to go down like this. It just went down."

A family reunification center was set up for anyone looking for unaccounted or missing relatives. Authorities said if anyone has family members that are unaccounted for or are safe, call 305-614-1819. 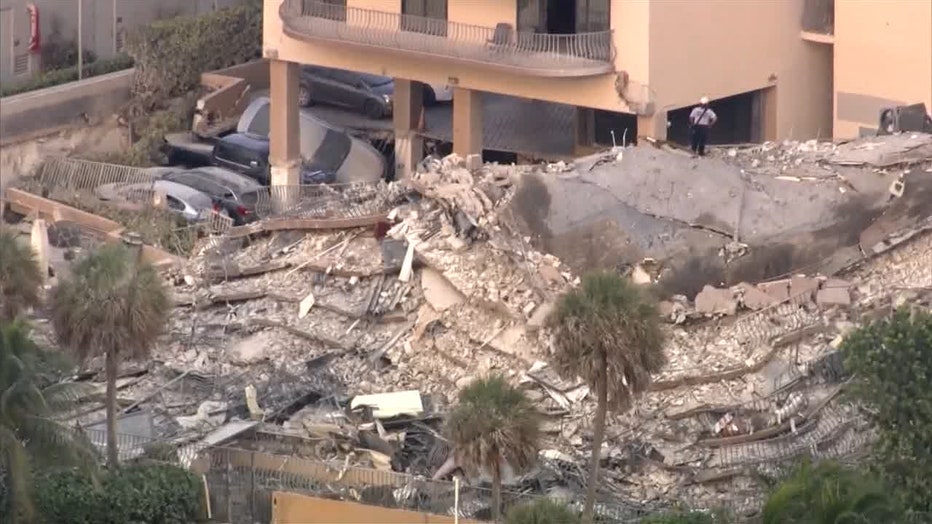 Miami-Dade County property records show the condo was built in 1981.

The view from SkyFOX in Surfside showed the large pile of rubble and damaged vehicles. Authorities brought in live-victim dogs and cadaver dogs for the search and rescue efforts.

Following the collapse, a cloud of debris was sent throughout the neighborhood, coating cars up to two blocks away with a light layer of dust. The collapse left a number of units in the still-standing part of the building exposed. There were bunk beds, tables and chairs still left inside the damaged apartments. Air conditioner units were hanging from some parts of the building, where wires now dangled.

Santo Mejil, 50, told the Miami Herald his wife called him from the building, where she was working as an aide for an elderly woman. 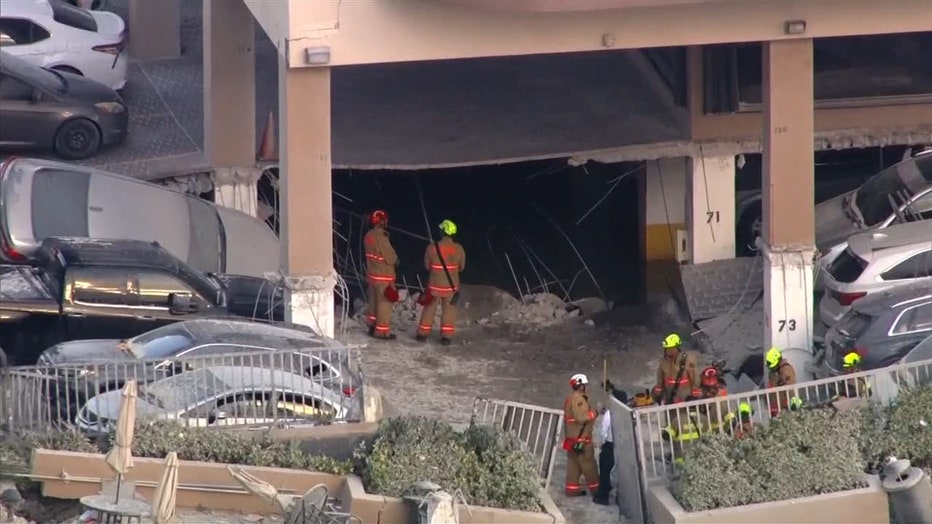 "She said she heard a big explosion. It felt like an earthquake," Mejil told the newspaper. He said she later called him and said rescuers were bringing her down.

Authorities had no immediate word on other casualties or details of how many people lived in the building.

Before sunrise, first responders pulled a boy from the rubble and placed him on a stretcher.

A young boy, who was trapped underneath the rubble after a large section of a South Florida condo collapsed, was rescued by Miami-area first responders. Source: WSVN

One witness, who was on vacation in the city with his family, was next door and said it sounded and felt like a tornado or earthquake. He said he believed much of the building was occupied, reports FOX News.

"It was the craziest thing I ever heard in my life," he said. Witnesses in the building nearby were told to evacuate. As of now, it’s unclear how many people were inside the building when it occurred.

The sea-view condo development was built in the southeast corner of Surfside, on the beach. It had a few two-bedroom units currently on the market, with asking prices of $600,000 to $700,000. 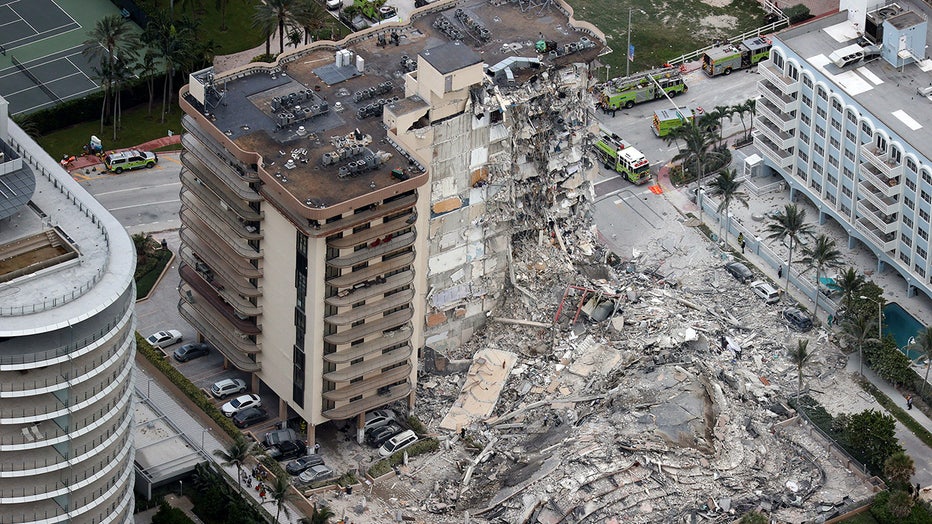 Search and rescue personnel work in the rubble of the 12-story condo tower. (Photo by Joe Raedle/Getty Images)

The area is a mix of new and old apartments, houses, condominiums, and hotels, with restaurants and stores serving an international combination of residents and tourists. The community provides a stark contrast from the bustle and glitz of South Beach with a slower-paced neighborhood feel.

The cause of the partial collapse remains under investigation.