UVALDE, Texas - The Houston Texans are continuing to show support for the Uvalde community in the wake of the deadly school shooting there in May. 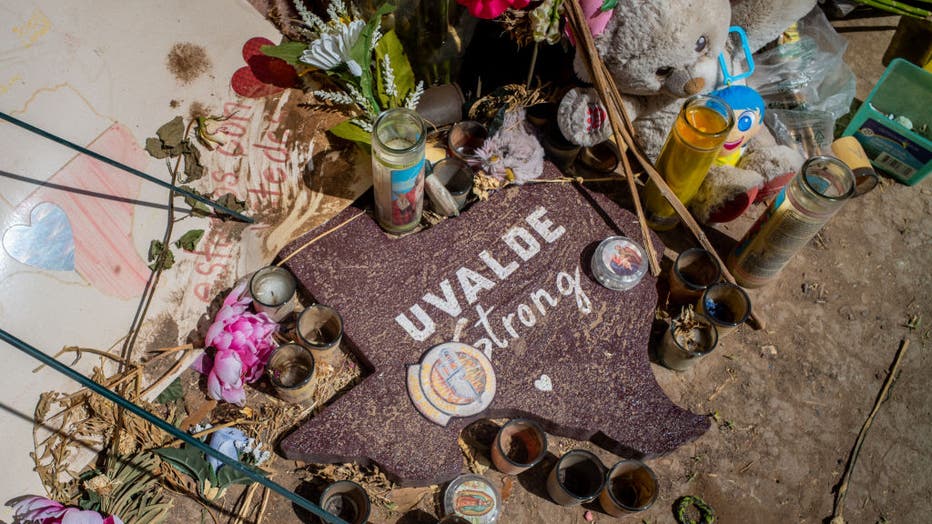 FILE. A sign surrounded in gifts is seen at a memorial in front of Robb Elementary School on June 17, 2022 in Uvalde, Texas. (Photo by Brandon Bell/Getty Images)

On Thursday night, they surprised the high school football players at a team dinner ahead of their home opener on Friday, the Texans say.

"First of all, it was a huge surprise, and usually people can’t keep surprises from me, but it was awesome. Just to feel the love from those guys and Coach Smith was awesome," said Uvalde Coach Wade Miller in an interview with FOX 26 Sports.

Cal and Hannah McNair led the Texans contingent visiting Uvalde, to give back, surprising the football team with new jerseys, pants, cleats, socks, gloves and other gear provided by Nike.

"To hook us up with uniforms, head to toe, including mouthpieces, everything. It’s unbelievable. We’ll feel the love from Houston for sure," Coach Miller said. "My kids are pretty normal football kids when we do football. It just shows them that they’re not alone."

At the Texans’ own season opener against the Indianapolis Colts on September 11, they will wear special helmet decals in support of the Uvalde community.

On Friday, the team shared an image of the stickers with the words "Uvalde Strong" and the Uvalde CISD logo.

"We stand with Uvalde," the Texans wrote on Twitter.

About a week after the deadly elementary school shooting on May 24 that left 19 students and two teachers dead, the Texans announced a $400,000 donation to the Robb School Memorial Fund.

The team said the players led the donation effort, coming together to give $200,000 to the fund. The Texans organization matched the donation.