A line of slow-moving thunderstorms that dumped torrential rain across eastern Kentucky early Thursday is now being blamed for at least eight deaths as floodwaters damaged hundreds of homes and vehicles and rivers and creeks rose out of their banks.

As residents of several states, from the Mississippi River Valley to the Appalachians, work to assess the damage and clean up from historic flooding, organizations are making it easy to lend a helping hand.

Flooding since Tuesday has damaged hundreds of homes and is being blamed for at least nine deaths, with Kentucky and eastern Missouri being the hardest hit.

Kentucky Governor Andy Beshear compared the damage to what residents were faced with in the aftermath of December 2021’s EF-4 tornado that leveled parts of Mayfield.

"These families are going to need help, much like our families in western Kentucky. They are also going through one of the worst disasters of this type that we have seen," Beshear said.

Some charitable organizations are opening hands to supplies and volunteers, while others are in need of monetary donations.

Here’s how you can help residents clean up from the storms.

TOPSHOT - Aerial view of homes submerged under flood waters from the North Fork of the Kentucky River in Jackson, Kentucky, on July 28, 2022. (Photo by LEANDRO LOZADA/AFP via Getty Images)

Team Eastern Kentucky Flood Relief Fund: The state established this fund on Thursday and is accepting financial donations. All donations are tax-deductible, and donors will receive a receipt for tax purposes after donating. Learn how to donate: Click here. 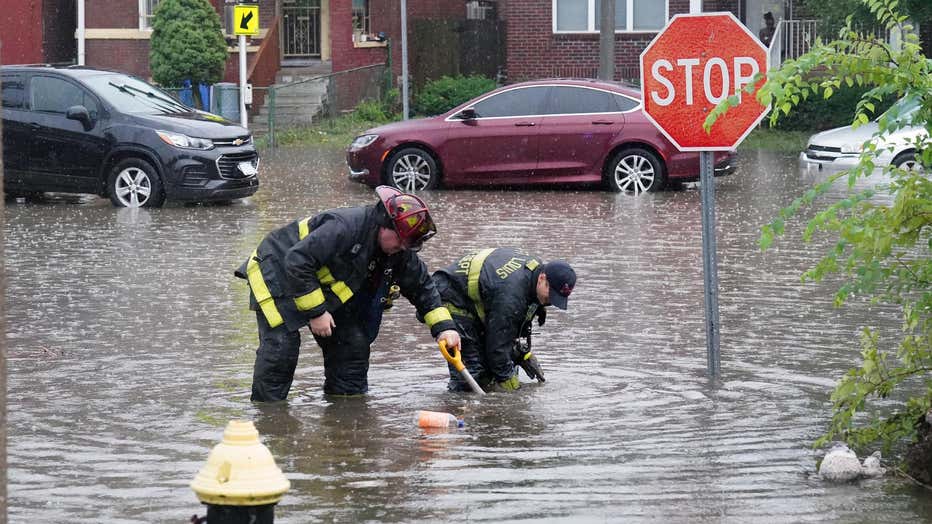 Salvation Army: Volunteers, resources and donations are needed by the non-profit to help residents of the St. Louis metro area recover. Find out more: Click here.

United Way: Volunteers and financial donations are needed. The organization says 100 percent of the donations will be used for its disaster response and long-term recovery. Find out more: Click here.

This footage was recorded by Jens Petersen, who said it was taken from his apartment complex in the St. Louis suburb of Hazelwood on July 26, 2022. Credit: Jens Petersen via Storyful