Huge crowds gather to mourn Iran general slain by US

Gen. Qassem Soleimani's daughter directly threatened an attack on the U.S. military in the Mideast during a funeral procession.

TEHRAN, Iran - Weeping amid wails from a sea of mourners, Iran's supreme leader on Monday prayed over the remains of a top Iranian general killed in a U.S. airstrike in Baghdad, an attack that's drastically raised tensions between Tehran and Washington.

The targeted killing of the Iranian Revolutionary Guard Gen. Qassem Soleimani drew a crowd, said by police to be in the millions, on Monday in Tehran, where Soleimani's replacement vowed to take revenge. Additionally, Tehran has abandoned the remaining limits of its 2015 nuclear deal with world powers in response to the slaying while in Iraq, the parliament has called for the expulsion of all American troops from Iraqi soil.

The developments could bring Iran closer to building an atomic bomb, set off a proxy or military attack launched by Tehran against America and enable the Islamic State group to stage a comeback in Iraq, making the Middle East a far more dangerous and unstable place.

Adding to the tensions, President Donald Trump threatened to demand billions of dollars in compensation from Iraq or impose “sanctions like they’ve never seen before” if it goes through with expelling U.S. troops.

Soleimani's daughter, Zeinab, directly threatened an attack on the U.S. military in the Mideast while speaking to a crowd that stretched as far as the eye could see down major thoroughfares in Iran's capital.

"The families of the American soldiers in western Asia ... will spend their days waiting for the death of their children," she said to cheers. Iranian state television and others online shared a video that showed Trump's American flag tweet following Soleimani's killing turn into a coffin, the “likes” of the tweet replaced by over 143,000 "killed" with the hashtag #severerevenge. 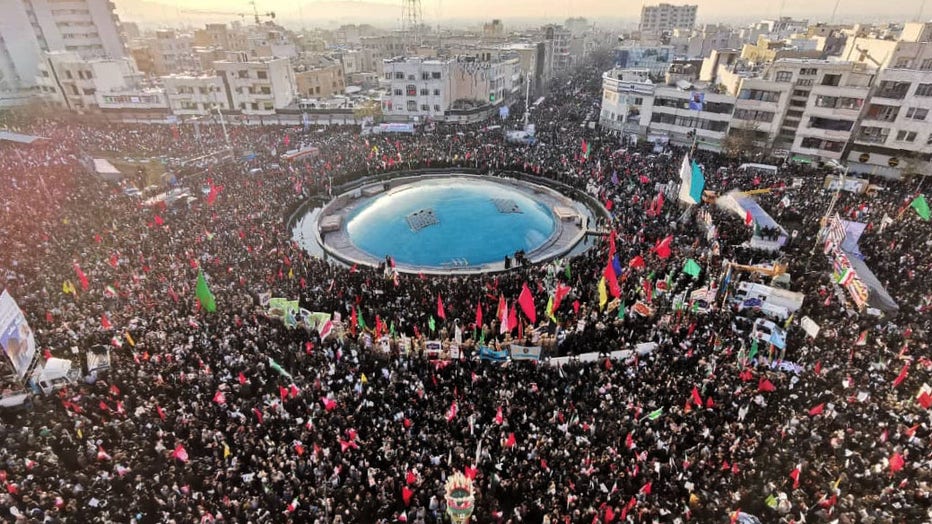 Mourners gather to pay homage to top Iranian military commander Qasem Soleimani, after he was killed in a U.S. strike in Baghdad, in the capital Tehran on Jan. 6, 2020. (Photo by ATTA KENARE/AFP via Getty Images)

Iran's Supreme Leader Ayatollah Ali Khamenei himself prayed over the caskets of Soleimani and others slain in the attack. Khamenei, who had a close relationship with Soleimani, wept at one point during the traditional Muslim prayers for the dead. The crowd wailed.

Demonstrators burned Israeli and U.S. flags, carried a flag-draped U.S. coffin or effigies of Trump. Some described Trump himself as a legitimate target for Iran's revenge.

“Trump demolished the chance for any sort of possible agreement between Tehran and Washington," Rashidi said. "There will be more conflict in the future for sure.”

Ghaani made his own threat in an interview with Iranian state television aired Monday. "God the Almighty has promised to get his revenge, and God is the main avenger. Certainly actions will be taken," he said.

Markets reacted Monday to the tensions, sending international benchmark Brent crude above $70 a barrel. The Middle East remains a crucial source of oil and Iran in the past has threatened the Strait of Hormuz, the narrow mouth of the Persian Gulf through which 20% of all the world's oil traded passes.

Ghaani, a longtime Soleimani deputy, has now taken over as the head of the Revolutionary Guard's Quds Force, an expeditionary arm of the paramilitary organization answerable only to Khamenei. Ghaani has been sanctioned by the U.S. since 2012 for his work funding its operations around the world, including its work with proxies in Iraq, Lebanon and Yemen.

Those proxies likely will be involved in any operation targeting U.S. interests in the Mideast or elsewhere in the world.

Already, the U.S. Embassy in Saudi Arabia warned Americans “of the heightened risk of missile and drone attacks.” In Lebanon, the leader of the Iranian-backed militant group Hezbollah said Soleimani’s killing made U.S. military bases, warships and service members across the region fair game for attacks. A former Iranian Revolutionary Guard leader suggested the Israeli city of Haifa and others could be targeted should the U.S. attack Iran.

"We promise to continue down martyr Soleimani's path as firmly as before with help of God, and in return for his martyrdom we aim to get rid of America from the region," Ghaani said.

“Firing a couple of missiles, hitting a base or even killing Trump is not valuable enough to compensate for martyr Soleimani's blood,” Hajizadeh said on state TV. “The only thing that can compensate for his blood is the complete removal of America from the region and taking away their evil from the oppressed people of the region.”

On the nuclear deal, Iranian state television cited Sunday a statement by Rouhani’s administration saying the country would not observe the nuclear deal’s restrictions on fuel enrichment, on the size of its enriched uranium stockpile and on its research and development activities.

German Chancellor Angela Merkel, French President Emmanuel Macron and British Prime Minister Boris Johnson specifically urged Iran to “withdraw all measures” not in line with the 2015 agreement that was intended to stop Tehran from pursuing its atomic weapons program.

Iran insisted that it remains open to negotiations with European partners over its nuclear program. And it did not back off from earlier promises that it wouldn’t seek a nuclear weapon.

However, the announcement represents the clearest nuclear proliferation threat yet made by Iran since Trump unilaterally withdrew from the accord in 2018 and reimposed sanctions last year. It further raises regional tensions, as Iran’s longtime foe Israel has promised never to allow Iran to produce an atomic bomb.

Iran did not elaborate on what levels it would immediately reach in its program. Tehran has already broken some of the deal’s limits as part of a step-by-step pressure campaign to get sanctions relief. It already has increased its production, begun enriching uranium to 5% and restarted enrichment at an underground facility.

While it does not possess uranium enriched to weapons-grade levels of 90%, any push forward narrows the estimated one-year “breakout time” needed for it to have enough material to build a nuclear weapon if it chose to do so.

The International Atomic Energy Agency, the United Nations watchdog observing Iran’s program, did not respond to a request for comment. However, Iran said that its cooperation with the IAEA “will continue as before.”

Soleimani’s killing has escalated the crisis between Tehran and Washington after months of back-and-forth attacks and threats that have put the wider Middle East on edge. Iran has promised “harsh revenge” while Trump has vowed on Twitter that the U.S. will strike back at 52 targets “VERY FAST AND VERY HARD. ”

He doubled down on that threat Sunday, dismissing warnings that targeting cultural sites could be a war crime under international law.

The processions for Soleimani mark the first time Iran honored a single man with a multi-city ceremony. Not even Ayatollah Ruhollah Khomeini, who founded the Islamic Republic, received such a processional with his death in 1989.

Soleimani will be buried in his hometown of Kerman.

RELATED: Protests across US condemn action in Iran, Iraq