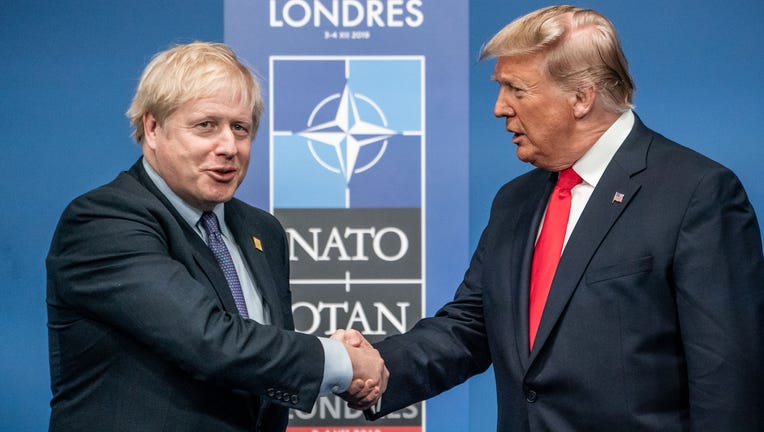 Boris Johnson (l), Prime Minister of Great Britain, welcomes US President Donald Trump before the start of the working session of a NATO summit.

WASHINGTON (AP) - The countries that top the rankings of COVID-19 deaths globally are not necessarily the poorest, the richest or even the most densely populated. But they do have one thing in common: They are led by populist, mold-breaking leaders.

Populism in politics means pushing policies that are popular with “the people,” not the elites and the experts. The United States' Donald Trump, Britain’s Boris Johnson and Brazil’s Jair Bolsonaro, as well as India’s Narendra Modi and Mexico’s Andrés Manuel López Obrador, have surged to power in democratic countries, challenging the old order by promising social benefits to the masses and rejecting the establishment.

But it turns out that when it comes to battling a new disease like COVID-19, the disruptive policies of populists are faring poorly compared to liberal democratic models in countries like Germany, France and Iceland in Europe, or South Korea and Japan in Asia.

Academics have been fretting about whether liberal democracy — the political system that helped defeat fascism in World War II, set up international institutions like the World Health Organization and seemed to have triumphed in the Cold War three decades ago — can muster the stuff to take on the new populism and address complex 21st-century challenges.

COVID-19 has crystallized that dilemma.

RELATED: US COVID-19 cases surpass 4 million, according to Johns Hopkins

“This is a public health crisis that requires expertise and science to resolve. Populists by nature ... have a disdain for experts and science that are seen as part of the establishment,” says Michael Shifter, president of the Inter-American Dialogue, a Washington-based think tank. He was discussing Brazil, where at least 81,000 people have died.

“Brazil has a wealth of expertise and the U.S. does, too,” Shifter says. “But the problem is, the populist politics makes it very difficult to implement rational policies that really resolve the issue — or at least manage the crisis more effectively.”

The United States, Brazil, the United Kingdom and Mexico all are led by leaders who have been skeptical of scientists and who initially minimized the disease. These four countries account for half of the 618,000 COVID-19 deaths worldwide so far, according to statistics tracked by Johns Hopkins University. India, meanwhile, is coming on strong. It just passed the mark of 1.2 million confirmed cases.

Members of the National Nurses United union held up photos of the deceased in hopes that the images would resonate with federal and state leaders.

“The pandemic and the economic crisis reveals the price of incompetence, and that this actually matters," said political scientist Thomas Wright of the Brookings Institution.

Wright, who directs the think tank's Center on the United States and Europe, said the disease “hits every blind spot that the populists have" and discredits a core piece of their proposition to voters.

“They basically are calling for disruption to attack the state and for distrust of institutions. And in objective reality, the virus disproves all of that," he said. “Because you need a functioning bureaucracy, you have to have confidence in the numbers, and you have to respond in a scientific way. Otherwise, more people will die and more people will get infected."

In the United States and Brazil, Trump and Bolsonaro at times have minimized the disease, touted unproven remedies and sparred with and sidelined scientists and health officials. Instead of framing and implementing a consistent anti-COVID strategy for their nations, they often have seen state and local leaders leading the fight.

In Britain, Johnson was slow to order closures when the disease was raging on the European continent. But he became much more serious about fighting it after his own serious illness left him fighting to breathe.

In India, Modi addressed the disease aggressively in terms of closures and lock-downs but also argued over facts with his government’s own statisticians, controlled information and at times promoted homeopathic and folk cures.

When it comes to the coronavirus, Jishnu Das, an economics professor at Georgetown University, sees common strands between India and the United States, the world's two largest democracies.

“What the virus looks for is any weakness in our system. And it hones into it and pries it open," says Das, who studies health and has been working with two state governments in India to tailor their pandemic responses.

He says the virus exposed in both countries a distrust of science and data, the systematic weakening of key institutions and a lack of legitimacy of state institutions.

The questioning of accepted facts is one characteristic of populist leaders. Another is to risk alienating their bases — such as by telling people to stay at home or to wear masks in public.

Cameras captured hundreds of people attending a worship service Wednesday night, many of them without masks and ignoring social distancing guidelines.

A third characteristic is the sowing of division to gain power along ethnic and national lines or against those deemed elite. Such divisiveness makes cooperation elusive, internally and internationally. Finally, a fourth frequent trait is a leadership style that favors bombast and crowd-pleasing antics.

After the pandemic hit Brazil, the world’s sixth most populous nation, Bolsonaro downplayed it repeatedly, calling it a “little flu” and saying the cost of shutdown would be worse than the disease. He said only high-risk individuals should quarantine, and touted unproven anti-malaria drugs for treatment.

Before he contracted COVID-19, Bolsonaro's administration provided monthly cash payouts to informal-sector workers. His government paid out a total $22 billion, benefiting more than half of Brazil’s population directly or indirectly, according to the citizenship ministry.

And similar to President Trump printing his signature on the $1,200 coronavirus rescue checks that went out from the U.S. Treasury, Bolsonaro’s government worked to make sure recipients in Brazil knew who to thank — part of what Shifter calls a populist leader’s playbook of adulation and the projection of power.

“If they begin to go along with science. they’re buying into the establishment way of thinking that many of their base sees as the main cause of the country’s problem to begin with,” he says. “It’s seen as kind of giving in or diluting their message, and so they refuse to do so.”

“If you rely on science and expertise, the risk is that it makes you seem weaker because you don’t know everything," Shifter says.

In Mexico, where 41,000 people have now died, López Obrador pushed to reactivate the economy while infections were still rising. Several governors refused to go along with the federal government’s push to reopen. López Obrador continued traveling the country and wading into crowds for weeks after the country confirmed its first infection Feb. 28. Instead, he showed people the amulet that he said kept him safe and did not wear a mask publicly until this month.

As the deaths spike in populist-led countries, it is an entirely different world in most of Europe, where the disease is now on the wane, though not yet defeated. German Chancellor Angela Merkel, speaking at the European Parliament last week, cited the need for consistent leadership, community spirit and “democratic cohesion."

“Fact-denying populism is being shown its limits,” she declared. “We are seeing at the moment that the pandemic can’t be fought with lies and disinformation, and neither can it be with hatred and agitation.”

“In a democracy," she added, "facts and transparency are needed.”