CALISTOGA, Calif. - Some 70,000 people in Napa and Sonoma counties, including the entire city of Calistoga, have been forced to leave their homes because of the raging Glass Fire, which on Tuesday was still threatening thousands of homes.

Cal Fire on Tuesday night issued an immediate evacuation order in Napa County for all areas west of State Routes 29 and 128 (Foothill Boulevard) to the county line, between Diamond Mountain Road and Petrified Forest Road.

The order upgrades the previous evacuation warning, meaning there is an immediate threat to life and that all but fire and public safety personnel must leave immediately.

The mandatory evacuation order issued Monday for the entire City of Calistoga remains in effect. Conditions are not anticipated to be safe in the near term, city officials said Tuesday evening.

This isn’t the first time a lot of these evacuees have gone through this.

Major fires have ravaged the North Bay since the 2015 Valley Fire, so evacuating is something many have done before, some as recently as a couple of weeks ago during the LNU Lightning Complex Fire.

Fire officials say the majority of people living in mandatory evacuation areas have listened to orders and left their homes – they’ve only had a few problems in the last couple of days.

Some 70,000 people in Napa and Sonoma counties, including the entire city of Calistoga, have been forced to leave their homes because of the raging Glass Fire, which on Tuesday was still threatening 8,500 homes. Sara Zendehnam reports

See a list of evacuation orders and warnings for Napa and Sonoma counties by clicking here.

Despite how many times people have had to evacuate their homes because of a wildfire – it’s a tough situation every time.

One man has evacuated three times in the last three years

The Glass Fire began Sunday as three fires that merged and drove vineyards and mountain areas into eastern Santa Rosa.

Cal Fire reported that since the beginning of the year, there have been over 8,100 wildfires that have burned well over 3.8 million acres in California. 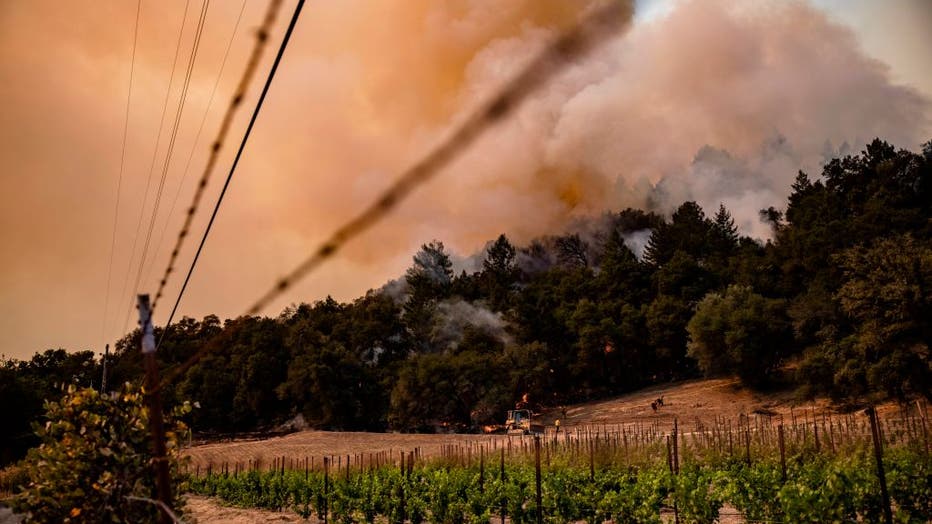 Fire Fighters set a backfire to help stop the advance of the Glass Fire which started in the early morning hours in Napa Valley, California on September 27, 2020. - The Glass fire grew to 2,500 Acres on the evening of September 27. A heat wave and dr