Two people were reported killed, and around 20 missing, after a landslide hit the Japanese resort city of Atami on July 3.

ATAMI, Japan - Rescue workers dug through sludge and debris Monday looking for dozens of people who may be trapped after a torrent of mud, trees and rocks ripped with a roar through a Japanese seaside resort town, killing at least four people.

Eighty people were still unaccounted for two days after the landslide, according to Shizuoka prefectural disaster management official Takamichi Sugiyama. Officials planned to release their names, hoping that perhaps some were away when the disaster struck, since many of the apartments and houses in Atami are second homes or vacation rentals.

Initially, 147 people were unreachable, but that number was revised downward after officials confirmed some had safely evacuated or were simply not at home. In addition to the four people found dead, officials said 25 people have been rescued, including three who were injured.

The disaster is an added trial as authorities prepare for the Tokyo Olympics, due to start in less than three weeks, while Japan is still in the midst of the coronavirus pandemic, with cases steadily climbing in the capital and experts suggesting a need for another state of emergency. 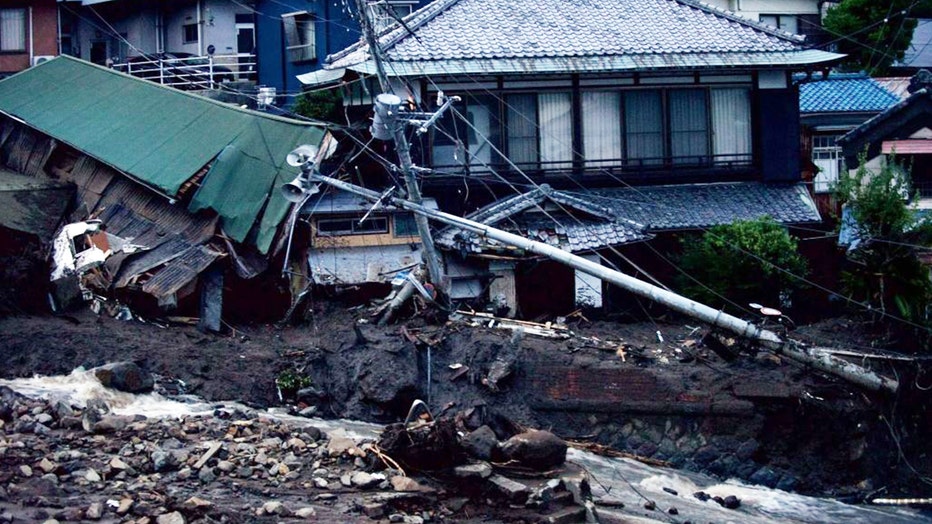 FILE - A view of damaged sites as search and rescue operations continue by firefighters and Japan Self-Defense Force after a landslide triggered by heavy rains in Atami city, Shizuoka Prefecture, Southern of Tokyo, Japan on July 5, 2021.

Prime Minister Yoshihide Suga told reporters that rescue workers are doing their utmost "to rescue those who may be buried under the mud and waiting for help as soon as possible." Three coast guard ships, and six military drones were backing up hundreds of troops, firefighters and others toiling in the rain and fog.

The landslide occurred Saturday mid-morning after days of heavy rain in Atami, which like many seaside Japanese towns is built into a steep hillside. It tore through the Izusan neighborhood, known for its hot springs, a shrine and shopping streets. The town has a registered population of 36,800 and is about 100 kilometers (60 miles) southwest of Tokyo.

Shizuoka Gov. Heita Kawakatsu, who inspected the area Monday where the mudslide was believed to have started, said rain soaked into the mountainside apparently weakening the ground under a massive pile of soil at a construction site that then slid down the slope.

The prefecture is investigating. Media reports said a planned housing development in the area was abandoned after its operator ran into financial problems. 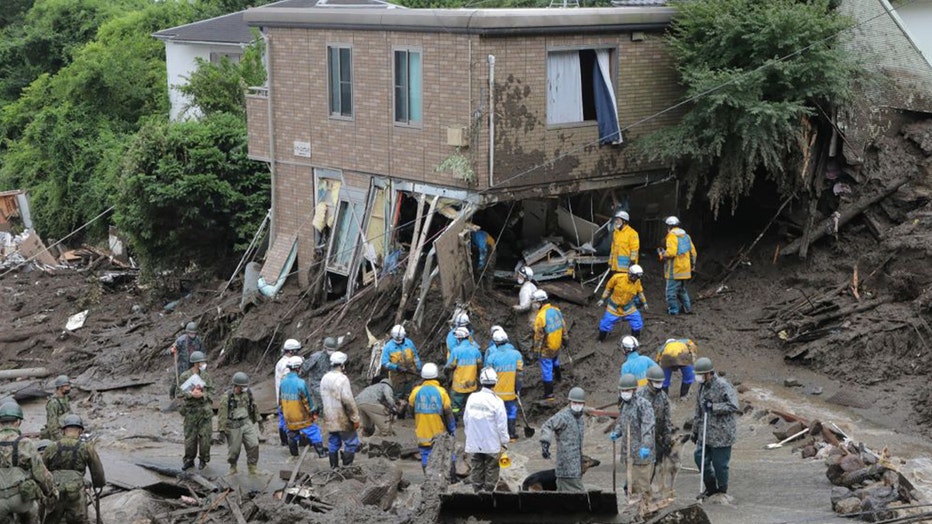 FILE - Members of Self-Defense Forces and police officers search for missing persons at the scene of a landslide following days of heavy rain in Atami, in Shizuoka Prefecture on July 5, 2021.

Witnesses described a giant roar as a small stream turned into a torrent, and bystanders were heard gasping in horror on cellphone videos taken as it happened.

Naoto Date, an actor who was visiting Izusan, was awakened by sirens. His neighborhood is now awash in muddy water with rescuers wading through knee-deep sludge. Just blocks from his home, some houses have been completely washed away, with only their foundations still visible. Mangled traffic signs stick out from the mud. At the seafront, he saw cars floating along with debris from destroyed homes.

"I grew up here, and my classmates and friends live here. I’m so sad to see my neighborhood where I used to play with my friends is now destroyed," Date told The Associated Press by videocall from his home in Atami.

While Date's mother, who was staying next door, has moved to a hotel along with other evacuees, the actor said he was staying away from evacuation centers because he is concerned about the coronavirus.

The Izusan area is one of 660,000 locations in Japan identified as prone to mudslides by the government, but those designations are not widely publicized and public awareness is low. Early July, near the end of Japan's rainy season, is often a time of deadly flooding and mudslides, and many experts say the rains are worsening due to climate change.

With other parts of the country expecting heavy downpours, authorities were urging people near hillsides in areas at risk to use caution. Public broadcaster NHK carried a program Monday about risk factors and warning signs that might precede a landslide.

Miyoko Okamoto, an employee at a care home for the elderly, said the mudslide came close to but narrowly missed her house. She and her son ran out of the house, while her husband, a community association leader, escorted neighbors to safer ground.

Okamoto said she hasn't been back home since fleeing because she is helping residents at the care home. "We were lucky to have survived, and that's most important," she said.

But her neighbor is still looking for his wife. "They are good friends of ours," she said, "and that pains my heart."