Former President Jimmy Carter said four more years of President Donald Trump would be a disaster during an event he attended in Atlanta.

ATLANTA - Former President Jimmy Carter took aim at President Trump while speaking at an event in Atlanta, saying it would be a “disaster” if he were to be elected for a second term.

Carter and his wife Rosalynn appeared before a crowd Tuesday during their annual report at the Carter Center, called “A Conversation with the Carters.”

Carter, who will soon turn 95, said he wants the Carter Center to be at the forefront of promoting peace, as well as offering constructive criticism to the U.S. government, in the years to come.

The former president said he would like the U.S. to be the “number one champion” of human rights, peace and equality in the future. Democratic candidates in the 2020 presidential race who pledge to take on similar causes would “probably” win his vote. 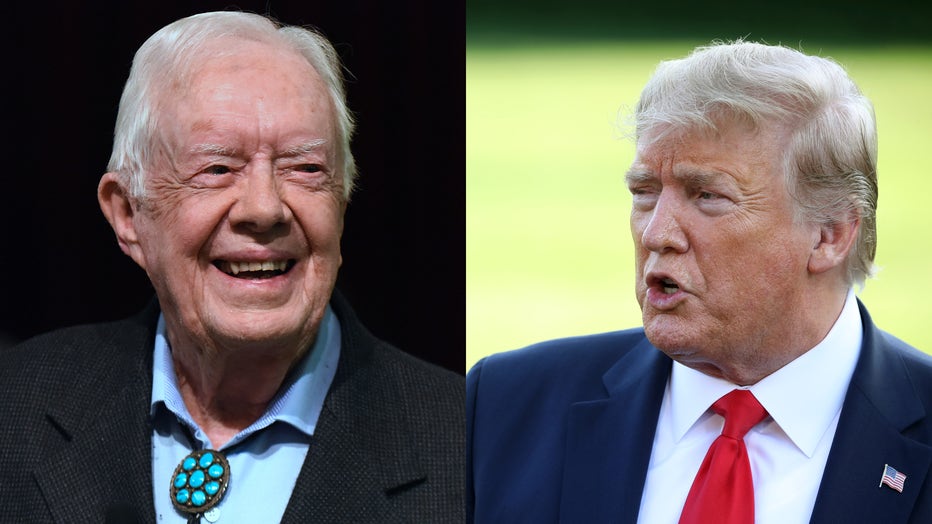 “I’m going to vote for one of them, and I haven’t decided yet which one,” Carter said. “I voted for Bernie Sanders last time. But I’m going to keep an open mind. One of the major factors I will have in my mind is who can beat Trump. Because I think it would be a disaster to have four more years of Trump.”

Carter then jokingly added, “This is a non-political meeting.”

RELATED: These are the candidates running for president in 2020

Carter previously took a swipe at the legitimacy of Trump’s presidency in June, saying Russian interference in the 2016 election was responsible for putting Trump in the White House.

The former president, who left office in 1981 after losing his re-election bid to Ronald Reagan, was also asked at Tuesday’s event if he had considered running in 2020 since he technically still could.

"I hope there's an age limit," Carter told the crowd with a laugh. "If I were just 80 years old, if I was 15 years younger, I don't believe I could undertake the duties I experienced when I was president."

He said the job requires a president "to be very flexible with your mind," especially related to foreign affairs.

Carter recently became the longest living president in American history and will turn 95 on Oct. 1.