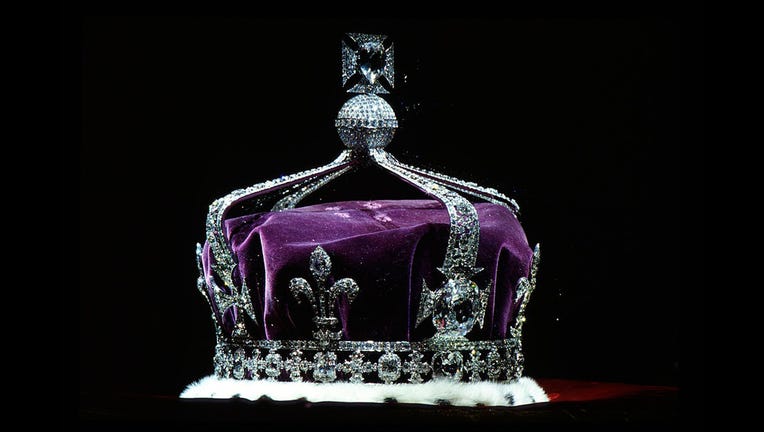 FILE IMAGE - The crown of the late Queen Elizabeth, The Queen Mother, made of platinum and containing the famous Koh-i-noor Diamond, along with other gems. (Photo by Tim Graham Photo Library via Getty Images)

LONDON - Hours after Queen Elizabeth II’s death, social media users in India began calling for the return of the famous Koh-i-Noor, a nearly 106-carat diamond discovered in India and obtained long ago by the British Empire.

Britain’s longest-reigning monarch died on Sept. 8. Shortly after, the word "Kohinoor" began trending on Twitter in India, and many sharing memes about taking the diamond back.

"If the king is not going to wear (the) Koh-i-Noor, give it back," one user quipped.

"Meanwhile I'm thinking about our Indian #Kohinoor on the Queen's (crown). Which will now reportedly be worn by Queen Consort Camilla shortly. Can you please return it #QueenCamilla?" another tweeted, citing reports in British media.

What is the Koh-i-Noor diamond?

The Koh-i-Noor — which means "Mountain of Light" in Persian — is believed to be one of the largest cut diamonds in the world. It originated from a mine in India thousands of years ago and has been a symbol of conquest throughout its history.

The diamond has had many previous owners, including Mughal emperors, shahs of Iran, emirs of Afghanistan, and Sikh maharajas, according to the official Britsh Crown Jewels website.

At one point, it was mounted on the Peaccock Throne, the Mughal throne of India, the Smithsonian Magazine reports. 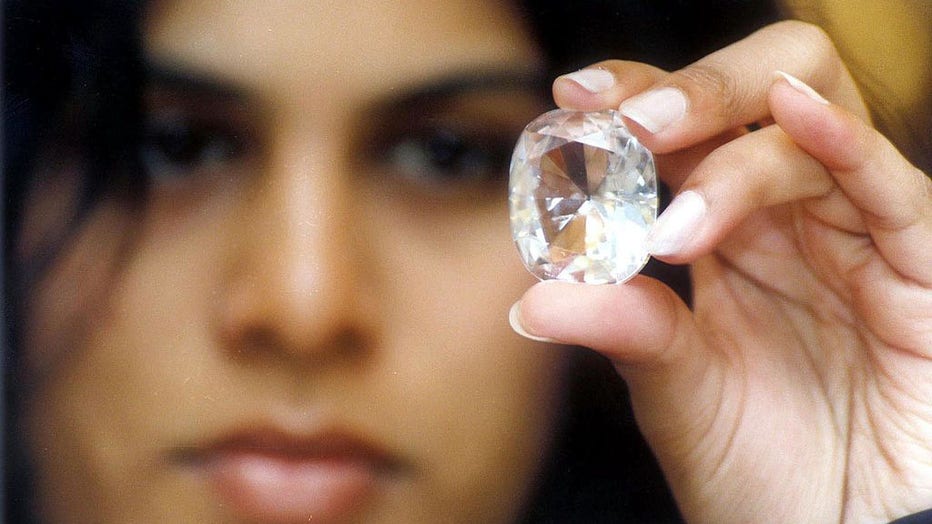 FILE IMAGE - Executive Director of Jewels de Paragon (JDP) Pavana Kishore shows the Koh-i-Noor diamond on display with other famous diamonds at an exhibition entitled "100 World Famous Diamonds" in Bangalore on May 19, 2002. The Koh-I-Noor diamond, w

It continued to change hands but ultimately returned to India with Sikh ruler Ranjit Singh in 1813.

"After Ranjit Singh’s death in 1839, the Punjabi throne passed between four different rulers over four years. At the end of the violent period, the only people left in line for the throne were a young boy, Duleep Singh, and his mother, Rani Jindan," the Smithsonian Magazine writes of the time period.

By 1849, Jindan was imprisoned and the British East India Company annexed Punjab, incorporating it within British India.

Duleep, who was just 10 at the time, was "forced" by the British to sign a legal document amending the Treaty of Lahore, that required Duleep to give away the Koh-i-Noor and all claim to sovereignty, the Smithsonian Magazine states.

"This marked the end of the Anglo-Sikh Wars in the Punjab, in present day northern India and eastern Pakistan," a description of the same time period reads on the British Crown Jewels website. "The Treaty specified that the jewel be surrendered to Queen Victoria."

Thus, the Koh-i-Noor ultimately went to Queen Victoria, becoming part of the British Crown Jewels. It was put on display at the Great Exhibition in 1851, where many were unimpressed with it, according to the Smithsonian. It was re-cut to improve its brilliance and conform to European tastes at the time.

FILE IMAGE - May 12, 1937 - Following the coronation of George VI, King of England, the coronation of Queen Elizabeth by the archbishop of Canterbury in Westminster Abbey. The Queen's crown was specially made for the ceremony and is mounted on platinum. The circle is the one belonging to the crown Victoria used to wear at the Court. At the top is the famous Koh-i-Noor diamond. (Photo by Keystone-France/Gamma-Keystone via Getty Images)

After the Queen Mother’s death in 2002, the Koh-i-Noor diamond was displayed on her crown when her coffin lay in state.

Today, the famous diamond, as well as all the other British Crown Jewels, are on display under armed guard in the Tower of London.

Anger over past, indifference meet queen’s death in India

Demands for the return of the Koh-i-Noor also highlighted the complicated issue of Britain’s colonial legacy.

Just hours before news of the queen’s death, Indian Prime Minister Narendra Modi delivered a fiery speech urging the country to shed its colonial ties in a ceremony to rename a boulevard that once honored King George V, Elizabeth's grandfather.

He said Rajpath, formerly called Kingsway, was a "symbol of slavery" under the British Raj. Instead, under the newly named Kartavya Path that leads to the iconic India Gate, "a new history has been created," Modi said.

His speech last Thursday was the latest in a concerted drive to purge India of its colonial relics. It was also a clear sign that the country, once the largest of Britain's colonies that endured two centuries of imperial rule, has moved on.

Modi later penned a heartfelt note, calling the queen "a stalwart of our times," while the government declared a day of mourning. But for most Indians born a generation after independence from the British in 1947, there is little attachment to the queen or the royal family.

Elizabeth visited India three times during her reign and was the first monarch to tour the newly freed country, cementing the start of fresh ties with Britain. After her coronation in 1953, she arrived in the capital New Delhi in 1961, where she addressed a massive crowd and nearly a million people lined up along the streets to catch a glimpse of her and her husband, Prince Philip.

The queen’s death provoked sympathies for a deeply respected figure from some, while for a few others, it jogged memories of a bloody history under the British crown. But among most regular Indians, the news was met with an indifferent shrug.

"To young Indians today, they seem like any other high-profile celebrity family - you might follow news of them because you want to know what is happening behind closed doors. But beyond the glamor and celebrity allure, they don’t hold any significance anymore," Darshan Paul, a 71-year-old resident of India, told the Associated Press.

This story was reported from Cincinnati. The Associated Press contributed. Editor's note: Pool video has since been removed from this story due to usage restrictions from the royal family.