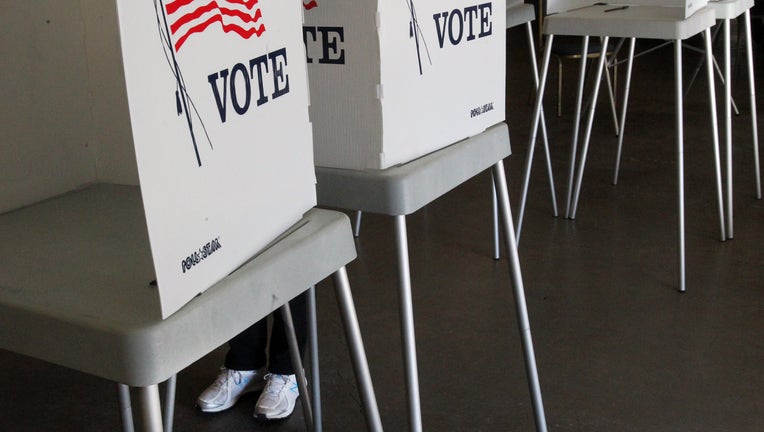 A voter casts their ballot at a polling station in the Summit Christian Fellowship in Big Bear, California, November 8, 2016. (BILL WECHTER/AFP via Getty Images)

PHOENIX (AP) - A national organization is announcing a $10 million campaign to turn out Hispanic voters in several of this year’s battleground states.

Mi Familia Vota, based in Phoenix, said it will spend $7 million on get-out-the-vote measures and an additional $3 million on digital and television ads, starting in Arizona and Florida.

Arizona in particular is seen as a battleground because of shifting demographics in the traditionally Republican state. Hispanics are a growing proportion of the electorate.

The campaign comes amid rising concerns about Latino turnout in a year when that community has been hit particularly hard by the coronavirus. Latinos account for higher rates of infection from COVID-19 when compared to their share of the population in a number of states, and many are struggling financially from lost jobs and lower wages.

As the pandemic explodes in diverse states like Arizona and Florida, people in communities of color who have been exposed to the virus are struggling to get tested.

“Basically what we’re saying is we’re not going to wait for political parties to do it themselves. They don’t invest in our communities,” said the group’s executive director and CEO, Hector Sanchez Barba.

That doesn’t mean they will all register or cast ballots on Election Day. U.S. Census data shows that 47% of eligible Hispanic voters in Arizona cast a ballot in 2016, compared to nearly 63% of eligible white voters.

Mi Familia Vota aims to get 3.3 million more Latinos in its targeted states to vote.

Latino turnout in states such as Arizona could help decide the presidential election, said Matt A. Barreto, co-founder and managing partner of Latino Decisions, a polling and research firm based in Los Angeles.

“We already saw this in 2018, where record Latino vote in a midterm provided the margin of victory for (Democratic U.S. Sen. Kyrsten) Sinema,” he said.

The campaign comes as both Democrats and Republicans vie for the Hispanic vote. The Trump campaign, for example, also is targeting Hispanic voters through messaging about the economy, public safety and family values. Andres Malave, regional communications director of Hispanic outreach for the Republican National Committee, said the Trump campaign has had a permanent presence in Arizona since 2016.

“President Trump’s policies are delivering for our families by ensuring safe communities and rebuilding the strongest economy in the world. Meanwhile, Biden is relying on other groups to bail him out to cover for his decades of failed policies that have disproportionately hurt Latino families,” Malave said.

While Mi Familia Vota has not endorsed presumptive Democratic nominee Joe Biden, its voter push will focus on turning out Latinos to vote against Trump, Sanchez Barba said.

He participated in a town hall with Biden in which the former vice president made a series of commitments to the Hispanic community, such as placing Latinos at the highest level of his administration.

“After the election, hopefully with a new president, we will immediately launch an accountability campaign,” Sanchez Barba said.