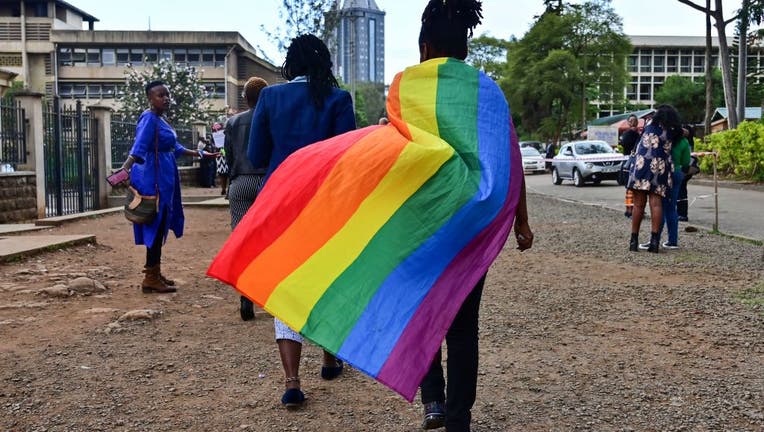 When he was attacked by a mob for being gay, Martin Okello said the kicks and blows from his assailants came so fast that he couldn't stop them or flee. He passed out and was left for dead in Nairobi's low-income neighborhood of Kawangware.

Okello had fled to Kenya from his native Uganda to seek asylum and protection under the U.N. refugee agency, he said, "but for the time I have been here, I could say we have been facing so many insecurities.”

Before the attack, the 29-year-old former radio journalist had kept his sexual orientation a secret for months as he worked as an educator for the LGBT community at a clinic in Kawangware. Still, he never expected to be persecuted in Kenya.

“We try as much as possible to keep a low profile, but in one way or another, you find yourself having a high profile because you can’t deny you are an LGBTI," he said. "So it just comes out, and when it comes out, someone is like, ‘Whoa! We can’t tolerate this in the community.’”

Okello's best bet for a life free from intolerance lies in being resettled in a developed country. But global restrictions on travel because of the coronavirus had put that process on hold.

“I was waiting for the last interview so that I can be resettled in the U.S. where I expected a nice life and acceptance for people like me, because life here is like being in a dungeon with lions,” Okello said.

He's one of more than 3,000 refugees in Africa and 10,000 worldwide whose resettlement was halted temporarily by the pandemic, according to the International Organization for Migration. It had no breakdown for how many of those are LGBT.

On Thursday, the IOM announced the restrictions finally were being lifted. The development came two days before World Refugee Day on June 20, which recognizes the millions of people forced to flee their homes due to war or persecution.

The news that the resettlement process was moving again “makes me feel good,” Okello said Friday, adding that he has been waiting for resettlement for 3 1/2 years.

In the meantime, Okello has found solace in a group shelter called the “House of Nature,” which provides safety and serves as an alternative family for those who have been kicked out of their communities due to discrimination.

Though around for decades, these shelters, or “houses,” have been popularized recently by the Netflix show “Pose." They have helped minority communities at the height of the gay rights movement in the U.S. and the start of the AIDS epidemic.

Houses are led by “mothers” and “fathers,” usually older members including drag queens, gay men or transgender women who provide guidance and support for the resident “children."

Human Rights Watch says 32 African nations have varying laws criminalizing homosexuality. In many cases, the laws are left over from the colonial era.

Uganda enacted anti-gay legislation in 2014, at one point calling for the death penalty for some homosexual offenses, although that law later was declared unconstitutional and jettisoned after international pressure.

Kenya is a rare regional haven. It is the only East African nation where someone can seek asylum and be registered as a refugee based on their LGBT status. And yet, there is still discrimination and harassment in Kenya. Gay sex is illegal, with sodomy punishable by up to 14 years in prison.

The “House of Nature” is led by Raymond Brian, another Ugandan refugee and a nonconforming gender person who also goes by the name of “Mother Nature.”

“People feel comfortable here because it’s not far from the family setup,” Brian said. “We use family therapy to help each other overcome the trauma from our pasts. There is a mother figure and a father figure."

The last time Okello talked to his parents was six years ago. “I miss my parents and siblings. Unfortunately, lines of communication shut down," he said.

His life in Uganda was shattered in 2014 when a male sex worker tried to extort him for $10 and outed him as gay. Okello was fired from the Christian radio station where he worked and was kicked out of his home by his Catholic parents. The same day that he was forced to leave home, he was attacked by a group of people but managed to take shelter at a friend's house.

Okello eventually made it to Nairobi, where he registered as a refugee and discovered the House of Nature.

It was started by Brian and others after Kenyan police raided a shelter of over 70 LGBT refugees. Now, three other houses have formed: Pride Umbrella Kenya, Lunko Contour and Refugee Trans Initiative. Members contribute rent through activities such as raising chickens, and other funding comes from LGBT nongovernmental organizations.

“We have to find ways of contributing to the house, including sex work,” Brian said, even though it is illegal.

Brian said the House of Nature found that when authorities were told of their presence or activities beforehand, they were less likely to be harassed by police.

But Brian said nothing could be further from the truth, and “what we need is understanding, not acceptance.”