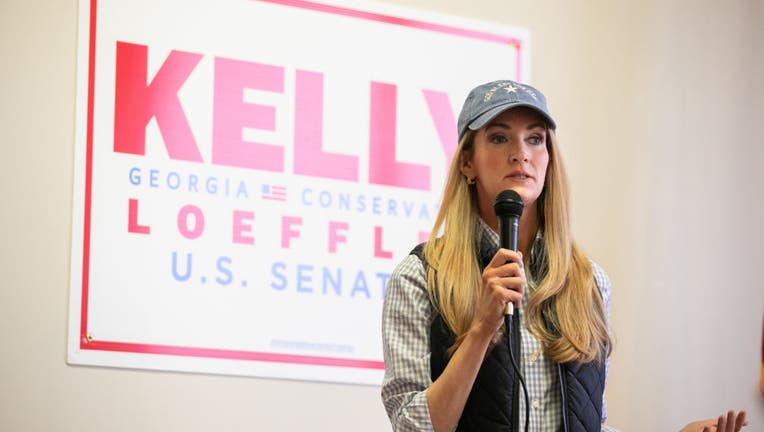 Sen. Kelly Loeffler speaks to supporters during a campaign stop at the Houston County Republican Party Campaign Headquarters on December 13, 2020.

ATLANTA - The campaign of Georgia Republican U.S. Sen. Kelly Loeffler is disavowing a photo circulating on social media of her posing with a longtime white supremacist at a recent campaign event, with less than a month to go until the runoff elections that will determine the balance of the U.S. Senate.

Loeffler did not know who Chester Doles was when she took a picture with him, her campaign spokesman Stephen Lawson said in a statement on Sunday. The picture was taken Friday at a campaign event in Dawsonville, Georgia.

“Kelly had no idea who that was, and if she had she would have kicked him out immediately because we condemn in the most vociferous terms everything that he stands for,” Lawson said.

Doles is a longtime white supremacist who spent decades in the Ku Klux Klan and the neo-Nazi National Alliance. According to reports, Doles was sentenced to prison for the 1993 beating of a Black man in Maryland and again on weapons violations in Georgia.

Doles is also associated with the Hammerskins, a racist skinhead gang, with whom he marched in the 2017 United the Right rally in Charlottesville, Virginia.

In response to a message from AP, Doles said Sunday he had “publicly renounced racism on several occasions in the past couple of years.” Doles added that he attended a “redemption service,” standing “in front of an all-Black congregation and told my story and renounced all racism and asked for God’s forgiveness.”

Doles posted the picture of him and Loeffler to his account on VK, a Russian social networking site where he has posted pictures of himself posing with other Georgia politicians, including Republican Congresswoman-elect Marjorie Taylor Greene.

Doles has attempted to insinuate himself into Republican politics over the past year, claiming to have renounced his past while maintaining ties with longtime friends in the white supremacist movement.

In 2019, Doles started a new organization called American Patriots USA, a group supportive of President Donald Trump but deeply tied to the far-right militia movement. Doles endorsed several longshot political candidates in the 2020 election, but also attempted to tie himself to Greene, who had Doles removed from an event in September in Ringgold.

Both major parties and activist groups are plowing tens of millions of dollars into Georgia ahead of Jan. 5, when David Perdue and Loeffler bid to hold off Democrats Jon Ossoff and Rev. Raphael Warnock, respectively.

Republicans need one victory to maintain their Senate majority. Democrats need a Georgia sweep to force a 50-50 Senate and position Vice President-elect Kamala Harris as the tiebreaking vote.

A flurry of top-flight surrogates has underscored the stakes of the race. President Barack Obama headlined a recent virtual rally for Democrats. President-elect Joe Biden plans to visit Atlanta this week to campaign for Ossoff and Warnock. Vice President Mike Pence was in the state last week and plans to return Thursday.