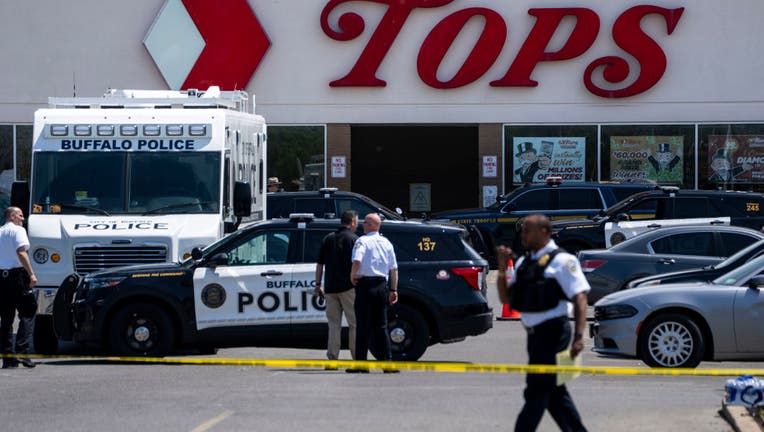 BUFFALO, NY - MAY 15: Law enforcement officials are seen at the scene of a mass shooting at Tops Friendly Market at Jefferson Avenue and Riley Street on Sunday, May 15, 2022 in Buffalo, NY. The fatal shooting of 10 people at a grocery store in a hist

LYNNWOOD, Wash. - A 37-year-old from Lynnwood has been arrested for allegedly calling up a Buffalo, New York grocery store and threatening to shoot any Black or Hispanic patrons there.

A criminal complaint filed says the man called a Tops grocery store location in Buffalo on July 19 and July 20. The location he called was close to the site of a mass shooting at the Tops on Jefferson Ave., when on May 14, a white gunman opened fire, killing 10 Black people inside the store. The 18-year-old gunman told investigators that the attack was racially motivated.

According to the criminal complaint, the Lynnwood man said he would "make the news if he shot and killed all of the Black people" and asked if the employee who answered the phone had cleared out the building.

He also told the employee that he would go to the Jefferson Ave. Tops, the site of the mass shooting, and shoot people there if he couldn't find anyone at the first location.

"The Buffalo community is trying to heal from the horrific shooting at a Tops grocery store.  I cannot imagine the type of fear such hate-fueled threats engendered in those just trying to go about their daily lives, said U.S. Attorney Nick Brown.  "We cannot tolerate this kind of hate in our community and will not sit by while people seek to terrorize others across our country."

According to the criminal complaint, the man allegedly made similar racially-charged calls over the last 12 months to businesses in Maryland, Connecticut, California and Washington.

He was indicted on Aug. 3 for a hate crime and four counts of making interstate threats.

The case is being investigated by the FBI.